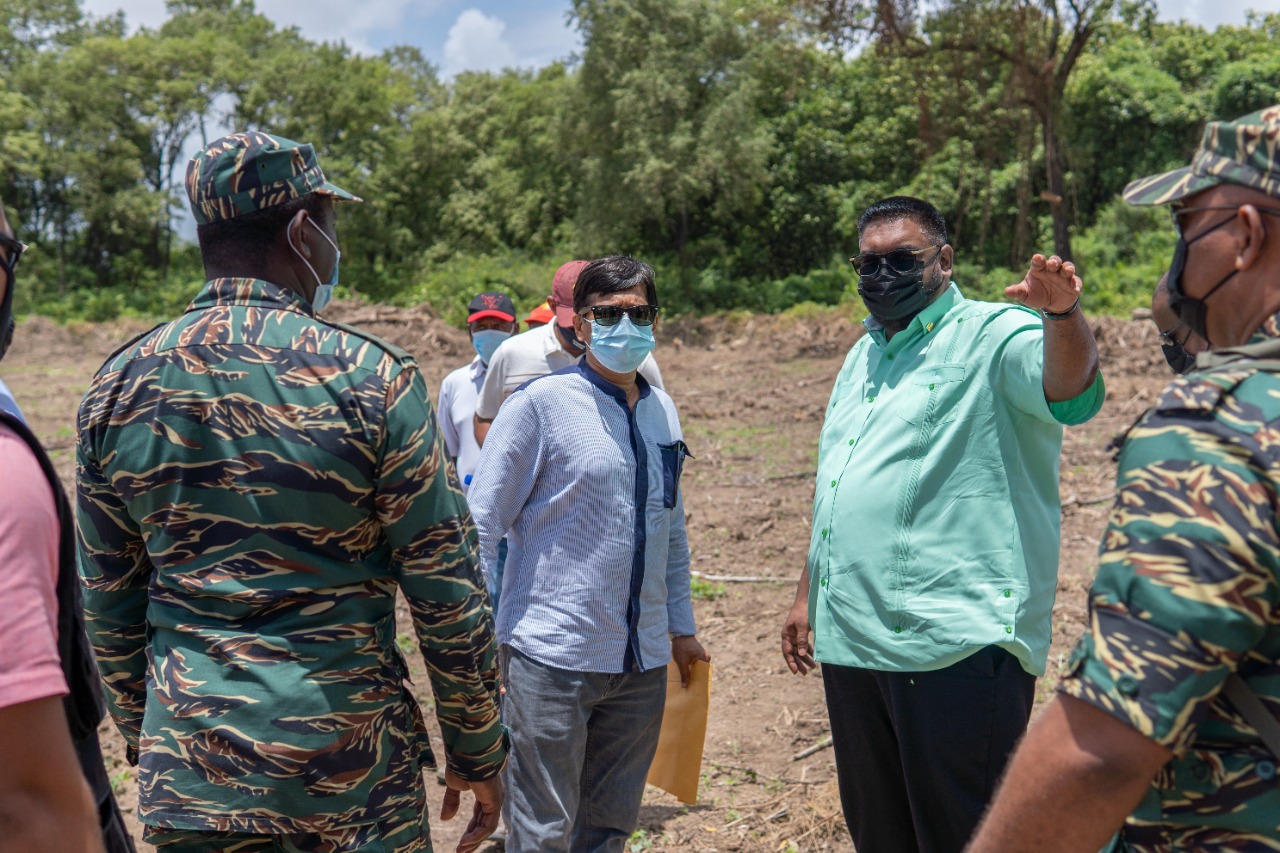 – Delivers on a commitment made to Leguan residents to build crematorium

Georgetown, Guyana (March 31, 2021) His Excellency Dr Irfaan Ali today reassured residents of Leguan that like the rest of Guyana they too will benefit from Government’s development programmes.

He said that the programmes, which include infrastructural changes, will benefit both urban and rural locations in the country.

The Head of State and a team of officials, including Minister of Public Works, the Honourable Bishop Juan Edghill and Minister of Agriculture, the Honourable Zulfikar Mustapha, journeyed to the Essequibo island this morning to announce the construction of a crematorium there—it was a commitment that the President had made to the residents.

The $25M-$30M facility is to be fully funded by the Ramroop Foundation with work set to begin in less than two weeks and an estimated completion time of six months.

President Ali told the residents that he was happy that the crematorium will remedy a situation that has existed for years and which was recently highlighted yet again following a visit by members of the NDC and community leaders.

“They asked me to help to find a way in which they can build a cremation site, one that offers the level of respect to those of our families we are sending off.”

The President said that he agreed to facilitate the process with the assurance that temples and the NDC on the island would be involved and that a local management committee would be established.

Having reviewed the artist’s impression and plans, President Ali said the new, modern facility will rival even the Ruimzeight facility.

He lauded the Ramroop family for their generous gesture, which he said exemplifies the spirit of community, camaraderie and unity.

“They are going to invest more than $25 million in this facility. It is at these moments that we realise how together we are as Guyanese. When a family is fulfilling their social responsibility, when they can be so generous to the communities.”

The President urged the residents to work together and to take care of the facility.

“This facility comes after years of sacrifices from the people, years of struggle and we have to ensure that through the construction phase and then in the management phase that we take good care of the facility and we pray that everything will go as planned.”

CONCERN FOR ALL CITIZENS

Meanwhile, the President expressed that the pandemic and prior mismanagement have negatively impacted growth. He pointed specifically to the impact on the healthcare system as a result of COVID-19 and the consequential effects it can have on society, education levels and on small business development.

Out of this concern, he assured the residents that the Government is working assiduously on various policies and programmes to bring relief to all citizens.

“We are spending tens of millions of dollars to ensure children remain in a continuous learning environment. We are spending resources on restocking our drug bond– billions of dollars in expired drugs we were greeted with when we came into government… This is the reality. But we are not complaining, because you elected us to fix the problem and we are working day and night to fix the problem.”

President Ali also said that in an effort to safeguard the agriculture sector on the island, efforts will be placed on enhancing its drainage and irrigation infrastructure.

He pointed to the importance of multiple facets of developments, which can advance the economies in Leguan as well as Wakenaam. Among these include the promotion of tourism.  He also announced that solar farm projects will be initiated on both islands, with the intent of reducing the cost of electricity for the residents.

The President added that his Government is driven to develop the lives of all Guyanese.

“This is important for us as a Government. We want every segment of the Guyanese population to feel involved, to be involved—to benefit. And that is what occupies our minds every single day.”

The President and the Ministers were accompanied by Security Advisor, Captain Gerry Gouveia, and Chief of Staff of the Guyana Defence Force, Brigadier Godfrey Bess.