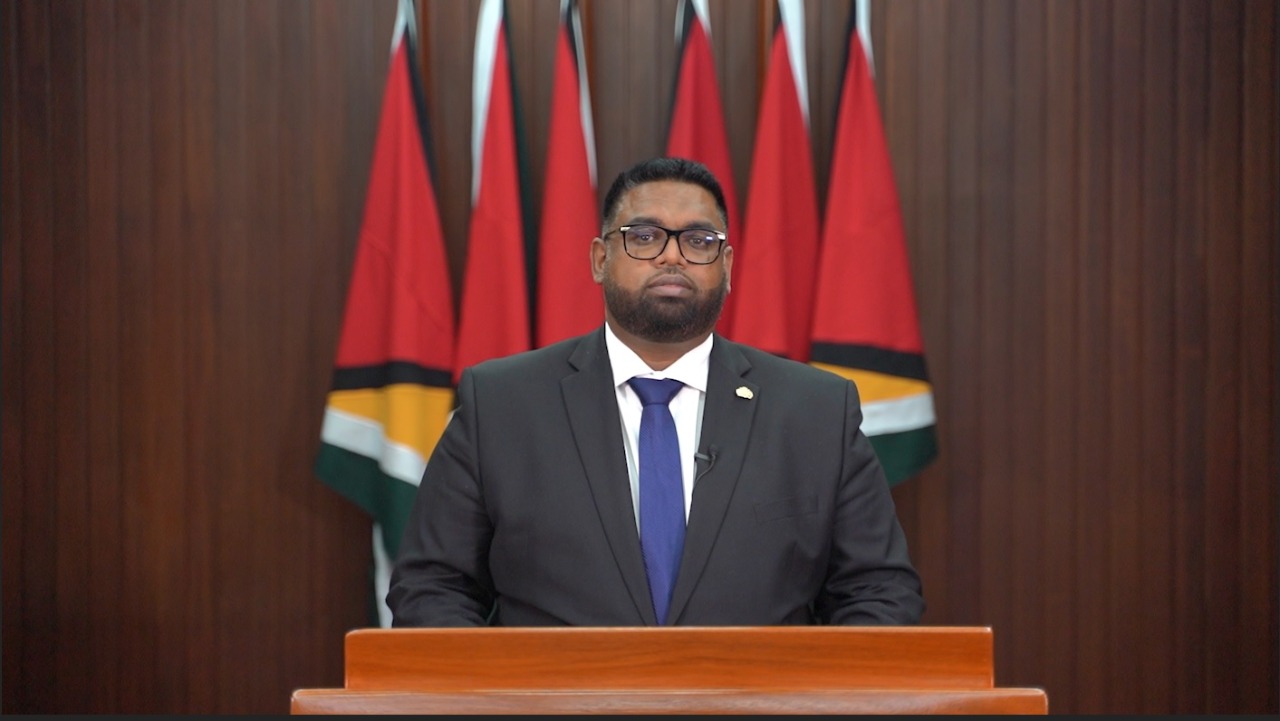 Georgetown, Guyana (March 29, 2021) His Excellency Dr Irfaan Ali said that Guyana is “deeply concerned” over the widening development chasm between rich and poor countries as a result of the COVID-19 pandemic.

He also called for more systems to be put in place to aid countries struggling to rebound from the deadly disease.

The Head of State made these assertions earlier today when he took part in the virtual Meeting of Heads of State and Government, on the International Debt Architecture and Liquidity.

“Guyana would therefore like to take this opportunity to urge, developed countries and international financial institutions to immediately revisit and reform the existing international debt framework, so as to make it more responsive to developing countries’ needs.”

He noted that while the pandemic has aggravated the levels of poverty and economic distress, the structure of the existing international debt compounds poorer countries’ bleak recovery prospects.

The President, however, applauded the recent initiative of the International Monetary Fund (IMF) to provide Special Drawing Rights (SDRs) of US$650 billion.  This, he said, would definitely enhance global liquidity and assist countries to navigate the risk and adverse effects of the pandemic.

While he complimented the G20 countries for initiating the debt service suspension initiative, which allows for the postponement of debt repayments for more than 70 low-income countries, President Ali also used the forum to “strongly urge” them to seriously consider granting a further extension of the standstill period to support theirrecovery efforts.

“Given the reality that many poor countries are saddled with debt distress, we advocate for broad-based debt relief to developing countries through international frameworks, similar to the Paris Club arrangements, such as the debt relief under the Heavily Indebted Poor Countries (HIPC) Initiative, and the Multilateral Debt Relief Initiative.Further, we encourage the granting of debt relief by bilateral and commercial creditors, not explicitly participating in debt relief initiatives”.

These measures, he added, will help to provide valuable fiscal space and liquidity for the affected developing countries, and allow them to mount appropriate responses, geared at mitigation, relief and rebuilding efforts in the wake of natural and biological disasters.

“Immediate relief should be provided. This could be achieved if developed countries, honour the pledge made to allocate at least 0.7% of the Gross National Income (GNI) to official development assistance.”

President Ali noted that the developed world’s achievement of this pledge has been underwhelming, as only four of the 29 member countries of the Development Assistance Committee (DAC); Denmark, Luxembourg, Norway, and Sweden have met or exceeded the 0.7% target.

He also made an appeal for developed countries, and international lending institutions to increase funding to support small developing states, so that they can better respond to natural and biological disasters, which exact massive tolls on their economies and infrastructure.

“The pandemic has highlighted the importance of international economic cooperation. Such cooperation to assist developing countries better shoulder their debt burdens has never been more imperative as it is now.’’

The high-level virtual meeting, convened as part of the Financing for the Development in the Era of COVID-19 and Beyond Initiative (FFDI), aimed to underscore the urgent need for more concrete action to provide liquidity and address debt vulnerability.

It follows the meetings and roundtables held in 2020 under the auspices of the FFDI to mobilise action to assist the economic recovery from the pandemic.

The COVID-19 pandemic, which has claimed more than 2.78 million deaths and resulted in more than 127 million confirmed cases to date, has gone beyond a health and humanitarian crisis to also become an unprecedented global development emergency.

We are sparing no expense in vaccinating the population—President Ali