Demand for land surveyors will increase as country expands—President Ali 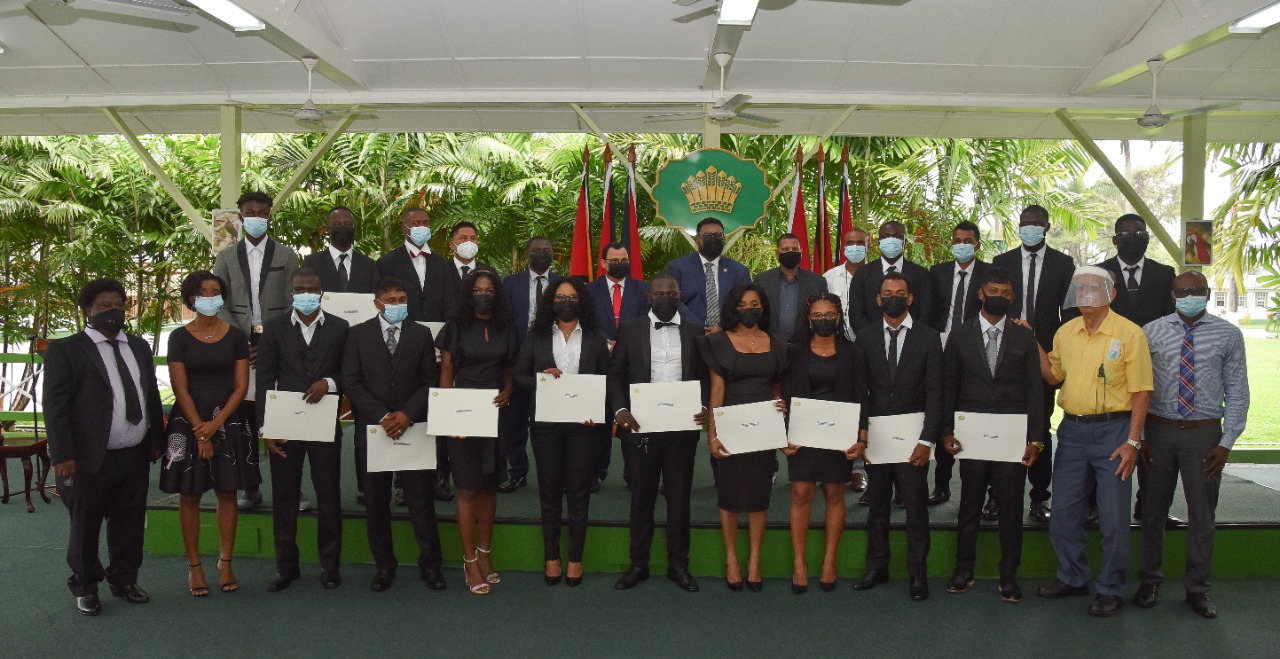 Georgetown, Guyana (March 26, 2021) His Excellency Dr Irfaan Ali charged 17 new land surveyors, who were given their credentials earlier today, to elevate themselves as Guyana continues down the path of rapid development.

After swearing in the officials, the Head of State pointed to the “respected and prestigious” nature of their careers and encouraged them to wear their badges with honour and to be respectful and professional.

“You belong to an important profession, one in which your character and reputation matter.  As land surveyors, you will also be expected to embody ethical responsibilities.  You will be expected to epitomise spotless integrity.  Land surveyors are expected to act with the utmost competence at all times and to exhibit the highest standards of personal and professional probity.”

President Ali told the group that their services will be greatly needed as the country opens up more land for investment opportunities.

“Guyana needs land surveyors….The demand will increase over the next 10 years.  Our economy is expanding, economic development will skyrocket over the next 10 years and beyond.  Mega projects are planned for the energy and transport sectors.  The tourism sector will experience economic take-off.   More than 50,000 house lots will be developed over the next five years. Private sector development will also intensify. A booming economy will generate a high demand for more surveying services.”

With national development in mind, President Ali further explained there will be major gaps created as the need for surveying increases.  He said that he hopes the “accomplishments of this cohort of land surveyors will inspire others to aim for excellence in training,” which will prompt the further advancement of the new professionals.

LEARN TO UNLEARN TO RELEARN

He told the new land surveyors that surveying is an ever-changing career that requires continuous education and technological adaptability.

“Today, as you advance your career, you’ll be working in a new economy, a new Guyana, don’t for a moment believe you have arrived today. You are just beginning the journey. Things are changing, dynamics are changing, technology is changing, skills sets are changing, and it requires continuous change in your outlook.  We have to learn to unlearn to relearn, that is the new paradigm we live in.  Technologies that were relevant 10 years ago are obsolete today.”

The President added that despite the changes, land surveyors have, throughout the ages, been proud individuals who have been integral in nation-building. He pointed to the intangible joys of the profession, especially its pioneering aspects of development.

He told the 17 that they have a chance to create history.

“Don’t let your story be told. Write your own story, follow the rules and the laws. You are an important asset in safeguarding the natural resources of our country.”

The President quoted the Lands Surveyors (Profession Act) of 2014 and charged the group to use it as a guide.

“The ‘Act’ is your rule book.  It enumerates the activities with respect to your profession.  It also stipulates the qualifications and requirements for registration as land surveyors.  The ‘Act’ must become your guide as you engage in the practice of land surveying.”

The Head of State pointed to the dynamics of surveying and the many variations that will be needed, including marine surveys, with the emergence of the blue economy (exploration and preservation of marine environment).  He also mentioned the need to understand urban planning when surveying a new city and the idea of regional planning when attempting to decentralise the economy.

He said the “Government is committed to training and advancing the training of land surveyors”.

He noted too that over the next ten years, opportunities will abound, “particularly for educated and smart, highly skilled, trained, and talented young people.  This cohort of land surveyors is, therefore, a pacesetter in producing quality skills needed for national development”.

The event, which was held at Baridi Benab, State House, was attended by senior members of the Guyana Lands and Surveys Commission, including CEO and Commissioner Enrique Monize, who also addressed the group.

We are sparing no expense in vaccinating the population—President Ali