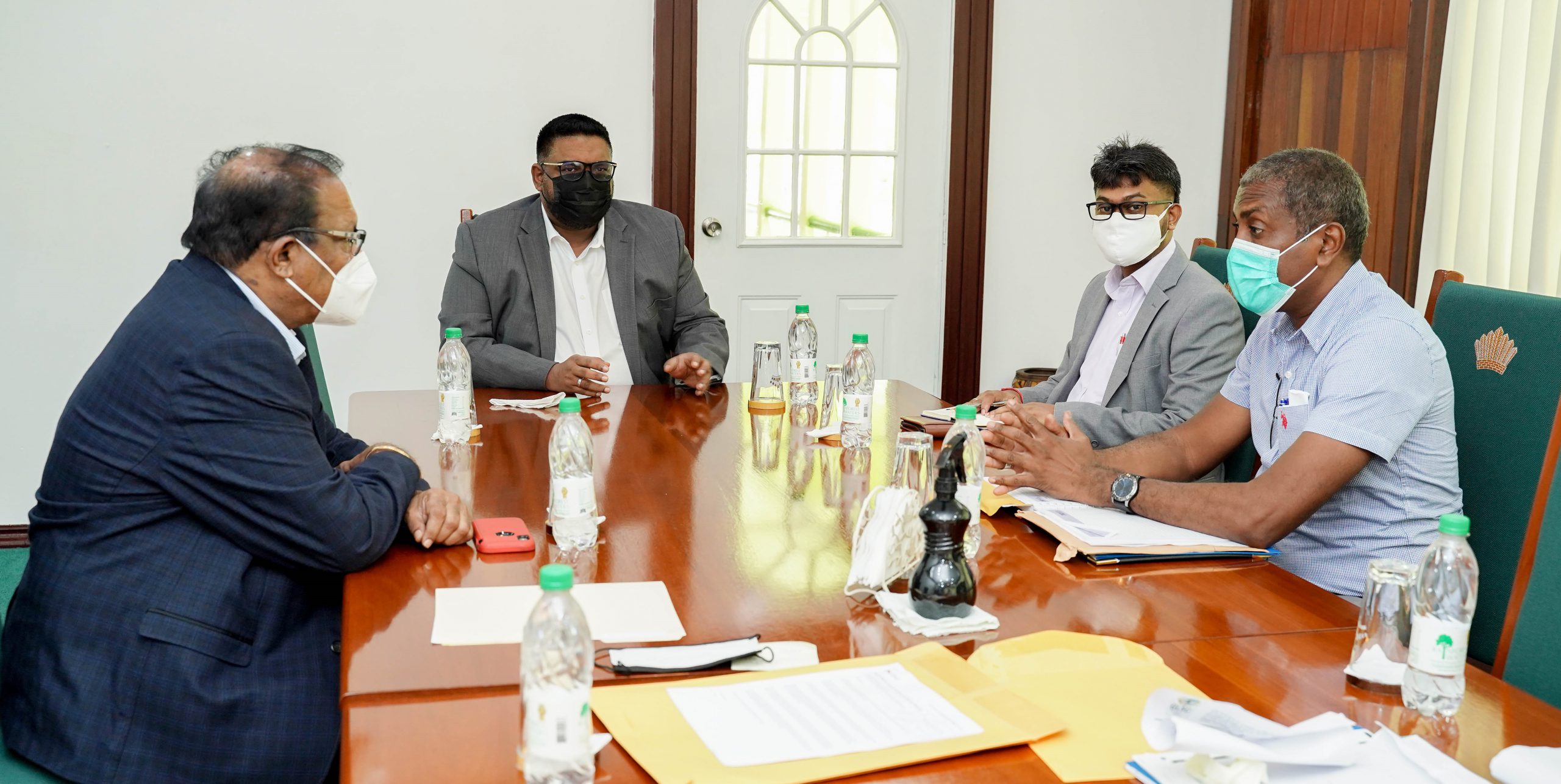 His Excellency Dr Irfaan Ali committed to an advance payment of taxes to City Hall to the tune of $100M during an engagement with the Mayor of Georgetown, Pandit Ubraj Narine, the Deputy Mayor Mr Alfred Mentore and a ministerial team at State House earlier today.

President Ali and the group discussed a range of issues affecting City Hall as well as ways of strengthening collaboration between Central Government and the Mayor and City Council (M&CC).

The President said that the “city and the national heritage of the city is a reflection of ourselves,” and pointed to the need for protection and preservation.

He called City Hall and its adjacent buildings important historical sites that need to be maintained.

“These things will cost a fortune to rehabilitate. But we have to start. We will pay a sum of the Government taxes in advance towards these projects. So we can have approval on that, so you can move that forward,” he told the Mayor.

Among the other areas discussed was the implementation of a ‘Single Window Permitting System,’ which will have linkages to several key agencies and which will address issues of slothfulness.

“We all know whether it’s the Central Housing and Planning Authority (CH&PA), whether it’s the NDCs, or the City Council, our greatest criticism is slothfulness in which things take time to get done in terms of approvals and so on.  And at the end of the day, it is the elected officials who get the blame. So the first thing I think we have to do is look at a modern permitting system that integrates all agencies via health, the city, CH&PA etc., into one single window. So when an application comes, it goes to everybody simultaneously.”

According to the Head of State, this mechanism will also address criticism of corruption and will go a long way towards improving the investment climate in the city itself.

In addition, the team discussed the ‘sprucing up’ of the capital, especially for the 55th Independence Anniversary and the allocation of the necessary funds to make this a reality.

PARK IN THE CITY

The Head of State said too that the issues of congestion and parking were paramount since structured systems are the hallmark of modern cities.

He proposed that the City Council work in tandem with the Private Sector to achieve infrastructure projects such as the enhancement and maintenance of parapets and drains in key parts of Georgetown as well as the construction of modern parking facilities.

President Ali noted too that collaboration between Central Government and City Hall is vital in addressing key and critical issues which affect the city.

“How do we build a deeper, more structured relationship between what the Government does and what the city does? I understand that at the level of the Council the type of arguments that are made there, there are different political interests there, but there must be a place in which you can reach out to the Minister, and we can discuss important issues that are critical and key for the city itself.”

The President reiterated that with the major transformation expected and the impending big projects on the horizon, there will be a greater need for strengthened collaboration between Central Government and the M&CC.

Mayor Narine used the forum to address challenges faced by the Council, including outstanding taxes.

He assured the President that as Mayor, he is willing to work along with the Government for the benefit and development of the city and its citizens.

Following the engagement, the Mayor expressed appreciation to the Head of State for hosting the “fruitful meeting” and said that he is looking forward to similar collaborations and further engagements between the M&CC and Central Government.

“Firstly, I want to thank the President for reaching with us—the Mayor and City Council; myself and the Deputy Mayor. We had numerous discussions and we are looking to work along with the Government for the development of the City and its people.”

Mayor Narine added that he was happy with the President’s commitments. He also expressed anticipation of strengthened collaboration with the Ministries “to get these things quickly done”.

Following today’s engagement, it is expected that City Hall officials will work in tandem with the Ministry of Local Government to finalise the plans proposed and to chart the way forward.