‘Heroine’ Kowsilla a symbol of democracy and workers’ rights 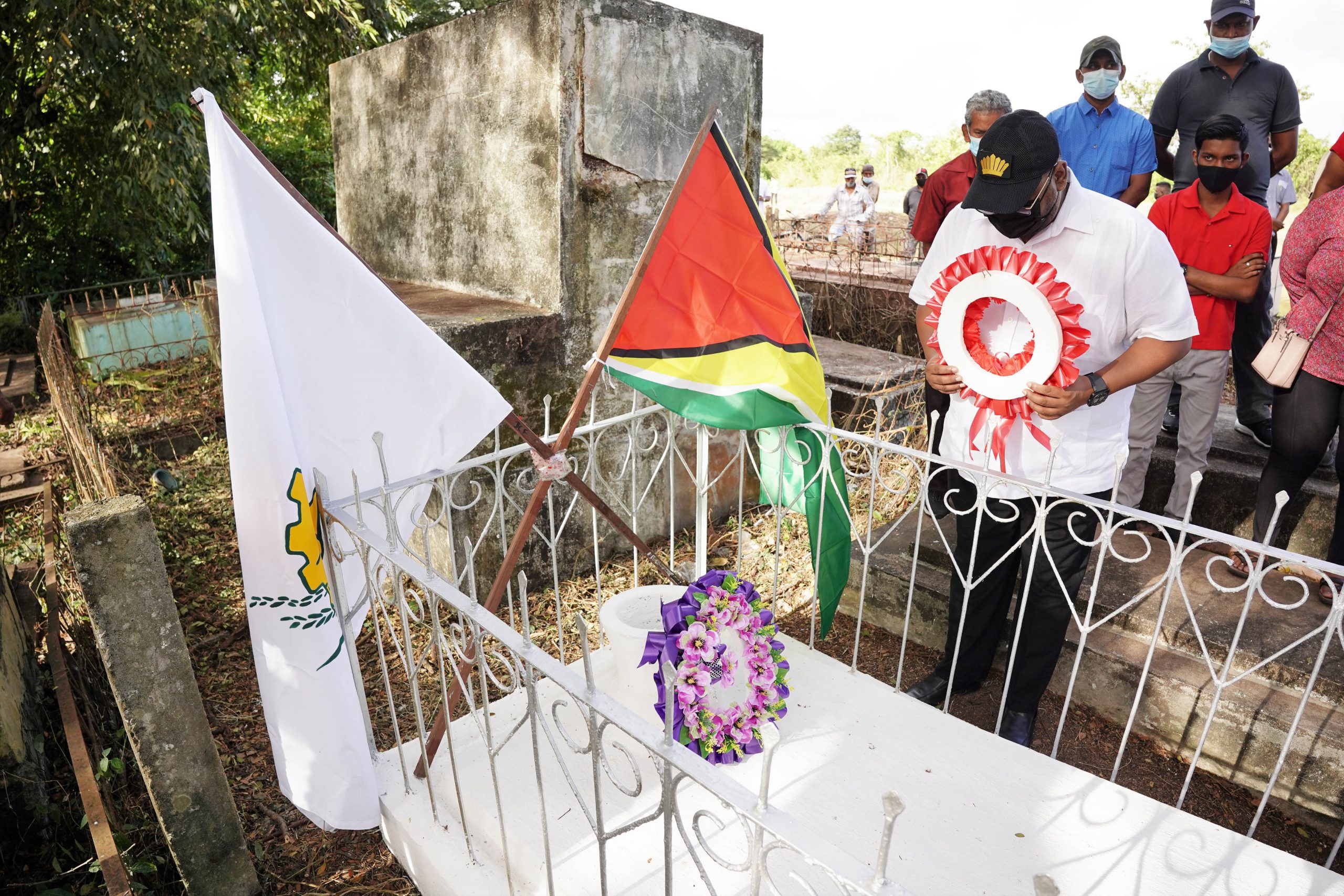 Georgetown, Guyana (March 6, 2021) His Excellency Dr Irfaan Ali, this morning, hailed Leonora ‘Heroine’ Kowsilla (Alice) on her 57th death anniversary, for her unwavering stance in fighting for the working people of Guyana.

During a small remembrance ceremony at Anna Catherina, West Coast Demerara, the President pointed out that Kowsilla’s life and legacy is an education and should be a reminder of the struggles that built what we enjoy today.

“Comrade Kowsilla left her name eternally marked in the history books, and in the history of Guyana. She is still alive, she’s still honoured, her name will continue for generations, and why would her name continue? Because she made the ultimate sacrifice for what she believed in…”

He told the gathering that though a half-a-century has passed, Kowsilla’s actions are still felt today.  He pointed out that she represents hope, inspiration and patriotism.

“As we reflect today, some may say you come every year for the same message, but it’s not the same message, it is the importance of the message. When we were sitting down at Ashmin’s Building a year ago in a morning like this, I remember Comrade Harrinarine Nawbatt coming to me in tears and he said to me I never thought I would relive a day like this in Guyana.  That is why these occasions are significant, because sometimes we get too comfortable. We get too comfortable and we do not understand the context of the sacrifices of people like Comrade Kowsilla.”

The President said that he was humbled and proud that like Kowsilla, Guyana’s younger generation fought for the democracy of our great nation last year, during the attempted rigging of our national elections.

He said too that like Kowsilla, their stance against oppression would also be remembered.

Kowsilla was murdered on March 6, 1964, when she was run over by a tractor while standing her ground in protest. She and several other women were with striking sugar workers who were protesting against being denied work and for the recognition of the Guyana Agricultural and General Workers Union (GAWU).  Although only Kowsilla was killed, several other women suffered lifelong injuries, including broken backs.

The President said that Kowsilla’s sacrifice was not for herself, but for her community and the workers.  He said that at the age of 16, he first spoke about her life and fell in love with her determination and resolve.

The Head of State noted that his Government would always look to protect its workers and ensure that they enjoy the fruits of their labour.  He said that the stance took by Kowsilla and her female companions are reflected in the sugar industry up to today.

“The building of the sugar industry is part of the legacy of Kowsilla; the protection of the workers, is part of her legacy. When we fail to protect the workers, when we stop protecting sugar, we’re failing her legacy and we’re going to stop protecting what she fought for. It is a very simple equation and we in this government have no interest in failing workers, wherever they are. We not only made a commitment to restore jobs to the sugar sector… we made a commitment to support those families who are still on the breadline that were removed from employment and that commitment is as strong today, as the day it was made and we are going to fulfil that too.”

He said that the family of Kowsilla gave the country a gift—a hope and related that Kowsilla did not see colour, she saw the need to represent Guyanese families and Guyanese workers.

The President said that Guyana is forging a new path, which regards and respects all Guyanese.   He spoke of the importance of the One Guyana campaign and the need for us to represent our cultures and differences, while bonding together with love, hope and an understanding that our lives will be better.

He said memories of the life of former president Dr Cheddi Jagan must also shine brightly as we surge forward.

“Let us recommit ourselves to the cause of unity, peace, workers’ rights, freedom, democracy and importantly, understanding that women pay the greatest price for development sometimes; and in doing so, let us all commit to uplift each other, to build

stronger families, stronger communities. There is no place for violence in the home. There is no greater gift than life. There’s always a way in which problems can be worked out. We have to build a new culture and with the spirit of life and legacy of Comrade Kowsilla, let’s commit to that.”