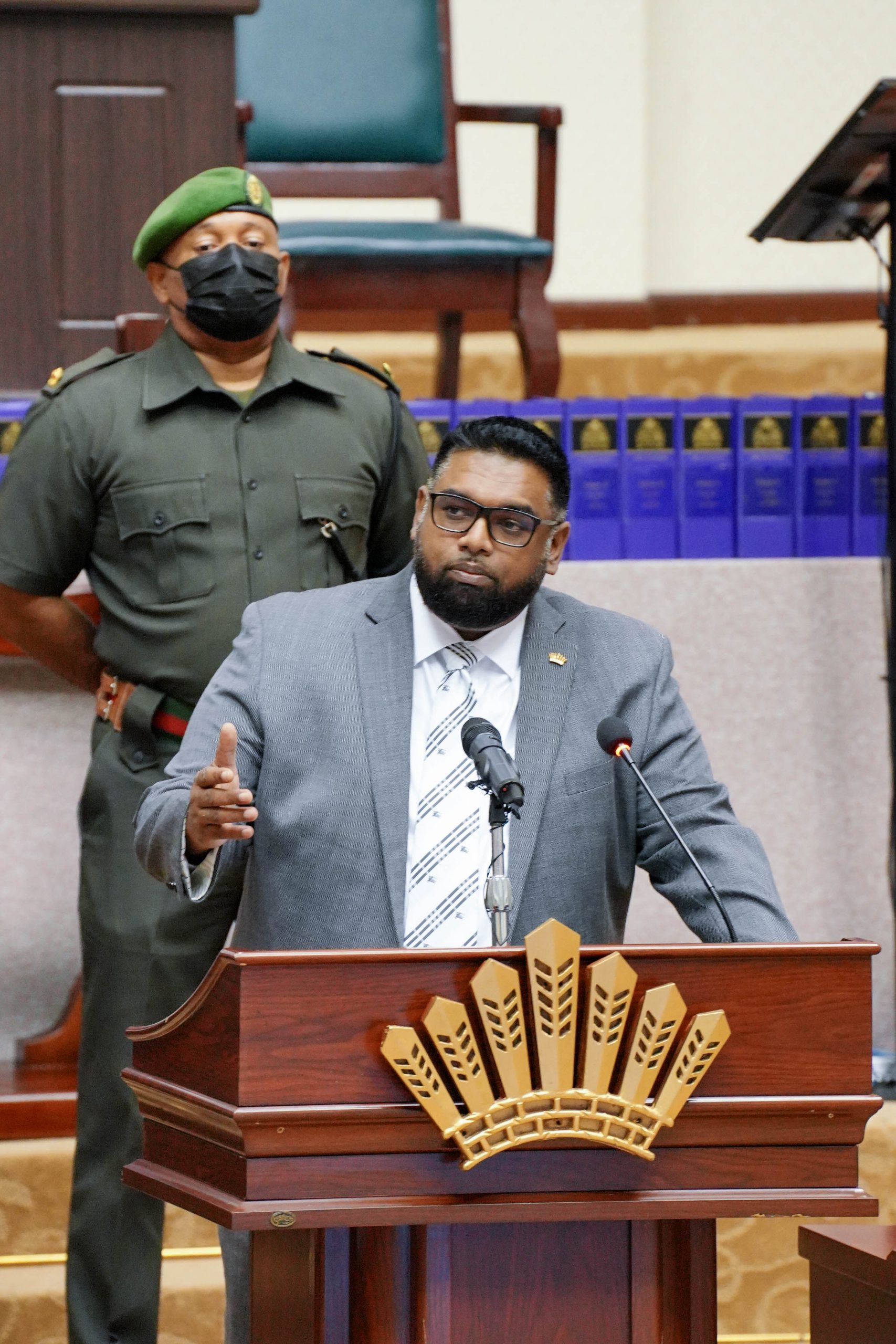 Georgetown, Guyana (February 15, 2021)–His Excellency Dr Irfaan Ali today reaffirmed his Government’s commitment to ensuring maximum participation and benefits for Guyanese in the Oil and Gas Sector, whilst noting that other sectors should be developed in similar ways.

He said that the Local Content Policy (LCP) would be a “Living Policy” and would evolve according to Guyana’s developmental needs.  Despite this modification process, the policy should always seek to ensure absolute benefits for Guyanese workers and businesses.

The Head of State made these assertions as he addressed the opening of the National Consultation on the Draft Local Content Policy, held at the Arthur Chung Conference Centre.

“Local content is not meant to be static; as our country continues to grow and change in nature, different aspects of the economy will evolve, the document or Local Content Policy has to continuously evolve too.”

The President said that not only will the policy be amended when necessary, but it will be relevant and unambiguous.

The President added that the developing framework should be assimilated into other local sectors, to ensure maximum gain.

He said emphasis will be placed on the insurance industry, the banking sector, manufacturing capacity, human resources and training and development.

The President noted that the idea behind this process is to help bring local businesses up to international standards.

“Local content is not only about doing business and increasing the level of business that will come to local companies; local content is about building the capacity of local companies, giving them the capability, so that they can become globally competitive, so that our business environment can become globally competitive, so that they can have the necessary transformation that leads them to the next level of business development.”

President Ali said that his Government is ready and willing to play its part in this development process since it recognises that there is an existing gap when it comes to capital, human resource capability, and technology.

He pointed out that his administration has already committed to building a stable macroeconomic environment, improving the ease of doing business, improving the efficiency of government institutions, and improving legislation to respond to our economy’s future needs.  In addition to this, President Ali added that the country will also get an Oil and Gas Training Institute.

“In recognising that there is an existing gap, we have to put systems in place now to quickly bridge that gap. In the intervening period, while we bridge this gap, we are saying that we also have to define a space for local business and local participation.”

President Ali was clear that although the policy should have maximum benefits for locals, it should not deter foreign investors.

“We are not here to say that we want to minimise foreign investment, that will be to our detriment. But we want the investors who are coming in to recognise that through legislative mechanisms, through regulations, through institutions that they have to commit to local content; and not only committed to local content, but we are going to move with you in setting targets as to the levels of local content.”

The President added that the LCP must also have a monitoring and evaluation mechanism.

The idea of consultation of the LCP is in keeping with the PPP/C Manifesto before entering Government.  The Head of State reiterated that his administration wants all Guyanese to be involved and benefit from our forthcoming wealth.

Several Government Ministers and officials, along with private sector representatives, were also at the consultation.

Region Eight is a centrepiece for national development – President Ali