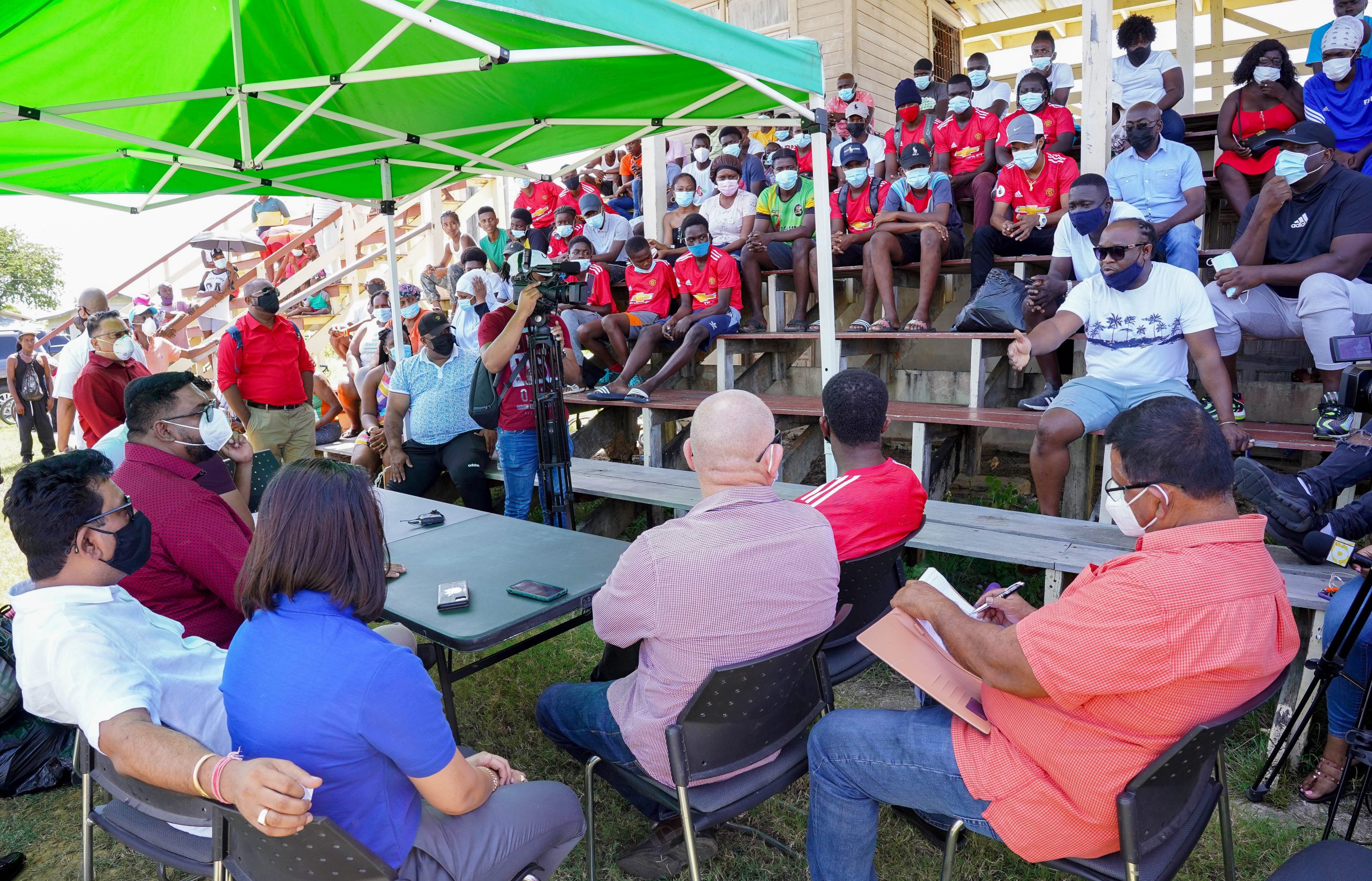 His Excellency Dr Irfaan Ali today assured residents of Golden Grove of his personal commitment to unifying the country, in keeping with his address in Parliament on Thursday.

Golden Grove was his fourth stop in his visit to the East Coast of Demerara, where he launched the inaugural ‘Republic Unity Cup’ and part of the Corridor of Unity pilot programme.

The Pilot programme he explained is intended to be an example for the rest of the country.

“First of all, respected elders, brothers and sisters, young people… I am very grateful to be here today. This is the commitment to the address I made in Parliament. In that address I said the most important achievement I would like the Government to deliver is the achievement of bringing our people together, bringing our communities together and creating one Guyana. I also promised in that address that I will lead this process myself and that I will go to ever community myself and work on building trust, work on breaking down barriers, and work on bringing us together.”

The Head of State, who had also visited the Lusignan, Buxton and Enterprise community grounds, pointed to the significance and importance of the communities selected, which he said have a shared history.   He noted that although there are differences and challenges, the communities all share a similar fighting spirit.

The Head of State pointed out that his Government’s reason for the Corridor of Unity is purely for harmony and cohesion and has zero political agenda.

“All of us want to leave a better tomorrow, but we can only leave a better tomorrow if we are willing to make the changes and sacrifices today. I am not here to tell you that I want you to vote for any political party five years from now, nothing like that, that is your democratic right and you choose it however you want, but what I am here to say is that we have a birthright, a patriotic right to Guyana to uplift this country for each other and to support each other. That right goes beyond politics.”

The President emphasised too that the greatest force of change comes from Guyanese themselves and will require a change in approach in dealing with each other.

“That decision is your decision; that decision is the community’s decision…We have to want it and be willing to do it and make the change and I am telling you today, I am ready to hold the hands of all these communities.”

The President also promised the residents that his Government will work with the communities in identifying their priorities, as such he announced the formation of a ‘Management Group’ for the corridor comprising of representative from the various ministries. These include the Attorney General and Minister of Legal Affairs Anil Nandlall, Minister of Culture, Youth and Sport, Charles Ramson Jr, Minister of Foreign Affairs and International Cooperation Hugh Todd and Minister within the Ministry of Housing and Water Susan Rodrigues along with a representative from the Office of the Prime Minister Pastor Patrick Findlay.

The Management Group was charged with engaging the communities on how to bring the corridor together and to determine how the pilot will be used.

The President pledged his Government’s involvement in supporting the youths in the community in accessing scholarships, providing access to jobs, including in the construction sector and providing access to technical- vocational programmes among other areas of benefit.

He also encouraged the residents to embrace the approach.

“Let us push to be included and be part of it. This is the message of the Government.”

The President also presented sport gear to the clubs in the community as he announced the roll out of another project, ‘the Republic Unity Cup ‘.

He noted that sport brings the communities together in a non-contentious way. He said that in addition to a trophy which will be up for grabs, the winning team will also earn the opportunity to benefit from community development projects.

During the engagement, the President and his team also interacted with the residents and afforded them the opportunities to share their concerns, which ranged from the management of the community grounds to access to potable water. Many expressed the view that their community was neglected for the last five years.

Seventeen-year-old Dominic Glasgow spoke to the President about his need to have personal gear to be able to play cricket. After listening to the young man, President Ali announced that the much needed gear will be provided early next week.

“I feel really good about what the President did … I want to thank him and the Government and I am really looking forward to Tuesday,” the Golden Grove Secondary School student explained.

He lamented on the fact that while he had expressed his lack of equipment to the previous administration, nothing was ever done.