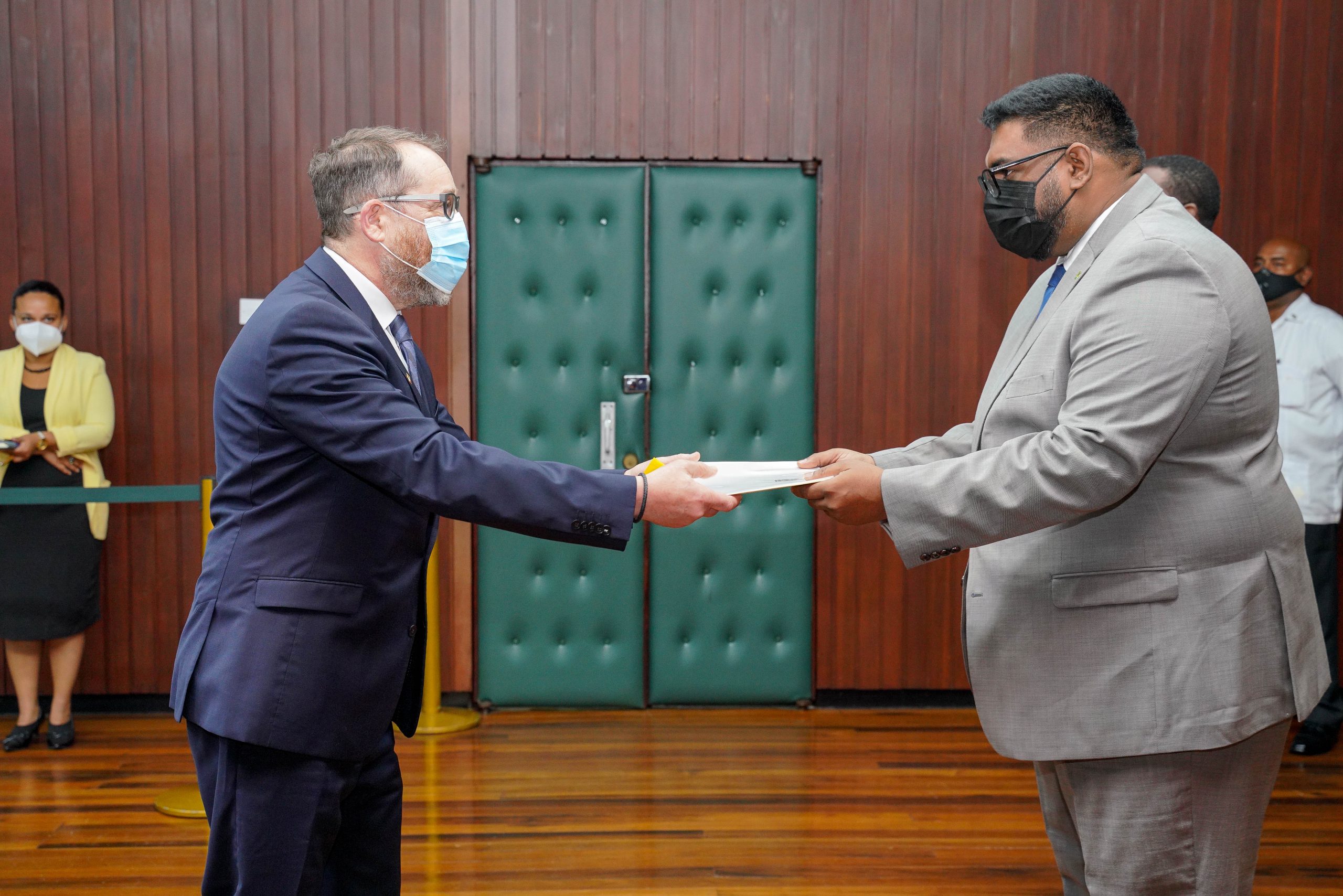 Georgetown, Guyana – (February 1, 2021) His Excellency President Irfaan Ali was today presented with Letters of Credence from His Excellency Mark Berman, which accredited him as High Commissioner Extraordinary and Plenipotentiary of Canada to Guyana.

The Head of State was joined at the Office of the President by the Minister of Foreign Affairs and International Cooperation, the Honourable Hugh Todd and the Permanent Secretary of the Foreign Affairs Ministry, Mrs Elisabeth Harper.

In accepting the Letters of Credence, President Ali reiterated his appreciation for the unwavering stance which Canada took in defence of Guyana’s democracy and its support for the county’s development. He noted that the two countries share a history of cooperation which have intensified since the establishment of diplomatic relations.

The President said that the countries’ shared respect for democracy, human rights, the rule of law, the promotion of sustainable development, each other’s territorial integrity, and the peaceful resolution of controversies have provided a firm foundation for bilateral relations.

“On behalf of the Government and people of the Co-operative Republic of Guyana, I express our gratitude for Canada’s continued support for the peaceful resolution of the border controversy between Guyana and Venezuela that is now before the International Court of Justice (ICJ).”

President Ali noted too that with Guyana on the cusp of major economic transformation, new opportunities for mutually beneficial partnerships are arising, which is exemplified by the recent establishment of the Canada-Guyana Chambers of Commerce.

“This reciprocal initiative paves the way for greater trade ties between our states as is evident with the presence of major Canadian companies operating in Guyana.  Guyanese owned businesses are partnering with Canadian companies.  I welcome your own commitment to facilitate the contributions of Guyanese Canadians to Guyana’s development.”

The President reiterated his Government’s support and partnership.

“Excellency, I am convinced that given our shared values and mutual interests, Guyana and Canada are poised to forge an enduring partnership for the mutual benefit of our peoples.  You can count on the support of my government as you undertake your mandate.  Welcome, High Commissioner, to the shores of Guyana and my best wishes for a successful tour of duty.

In presenting his Letters of Credence, His Excellency Mark Berman acknowledged that both countries have shared a legacy of development and prosperity.

“I am very proud that Canada has been here in Guyana since Guyana’s Independence and before and that we continue to be present and a very vocal supporter of Guyana today.  I commit to you to continue to advocate for democracy as we have done for many years and most recently during Guyana’s electoral impasse and that we will continue to reiterate the importance of the will of the people.”

The Canadian dignitary congratulated Guyana on its efforts to tackle COVID-19 and reiterate Canada’s commitment to assist Guyana in response to the Pandemic.

In addition, the High Commissioner pledged his support for the development of priority work including, private sector development, strengthening the judiciary, promoting  gender equality, support for indigenous people and other areas as Guyana prepares for rapid economic growth.

“During my tenure here I look forward to engaging with the Chamber of Commerce, the Government of Guyana and other stakeholders in the business community to forge more of these trade partnerships between Canadian and Guyanese companies. I am excited about these possibilities and you can count on my support. I am honoured and humbled to serve here in Guyana and I am ready to work hard to continue our strong relationship.”