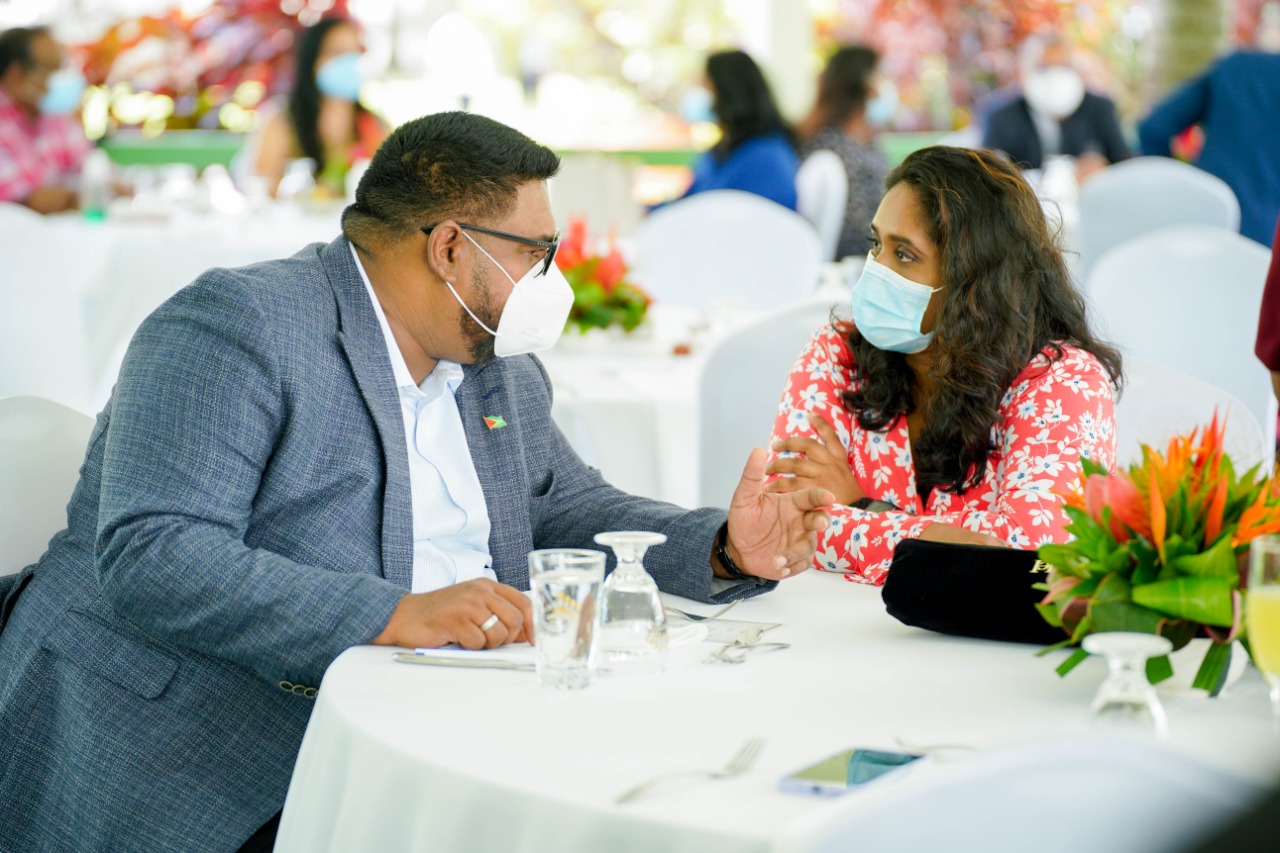 Georgetown, Guyana – (February 1, 2021) His Excellency Dr Irfaan Ali on Sunday assured members of the media that his Government remains committed to engaging all stakeholders for the development of Guyana.

“As President of Guyana I’m open to constructive criticism; I’m open to ideas and I’m open to sharing of responsibilities for the development and advancement of our country.”

The Head of State made these remarks to scores of media workers from across the country during the Annual Media Brunch held yesterday morning at Baridi Benab at State House.

In his address, President Ali caution that while the society is free to openly express their views on various matters, this must be done in a responsible manner.

“I believe that in a free and open society, every view has a value and every view must be expressed freely.  But in expressing those views there comes a responsibility also… As Nazima said, the responsibility of ensuring there is balance, there is fairness, there is factual basis on which those views are expressed is important in maintaining, not only freedom, but the image that the press is unbiased.”

The President pointed to the importance of a collective stance on national issues by the media, which he said will allow for a collaborative effort in addressing those critical issues and will foster strengthened trust. Key among these were national unity, domestic violence, engagement of the diaspora and suicide.

“These are all critical areas that we can work on, a common agenda on which we can build a national strategy, in which the government and the media can work together in helping

a national cause. I think these are areas that can also help us to build trust; it is important that we build trust among each other also.”

President Ali also committed to enhanced collaboration with the media with regards to development projects so that they will better understand the developmental shift taking place in the country.

“And I agree with you that the Government has to play a greater role in getting information out there and involving you in understanding the information in a very practical way, ensuring that the media is engaged not only from the desk, but from where development actually takes place, and these are things that I will support.”

President Ali indicated that the media corps will also benefit from the Government’s scholarship programme and will have access to training in specific areas of specialisation including mass communication, journalism, and marketing.

ROLE OF MEDIA IN SAFEGUARDING DEMOCRACY

The Head of State also expressed appreciation to the media houses for their role in securing democracy for Guyana post elections.

“Before closing, I must take this opportunity to thank the media; with very limited resources and with long hours, the media did an exceptional job in securing democracy for Guyana….It is because of the vigilance of the media, the steadfastness of the media, and to a large extent the independence and balance in the media that allowed us as a country and as a people to ride out that period successfully.”

President Ali reiterated that his government remains open and ready to engage and collaborate with the media.

Ms Raghubir used the forum to highlight several matters; she placed a call for more engagements between the President and the press, the resumption of Post Cabinet Press Briefings and enhanced involvement of the media in development projects among others.

The GPA head also pointed to financial challenges facing the media due to COVID- 19.  In his response, President Ali said that with the impending development more resources will be injected into the economy which will bring with it greater revenue for media houses and their workers.