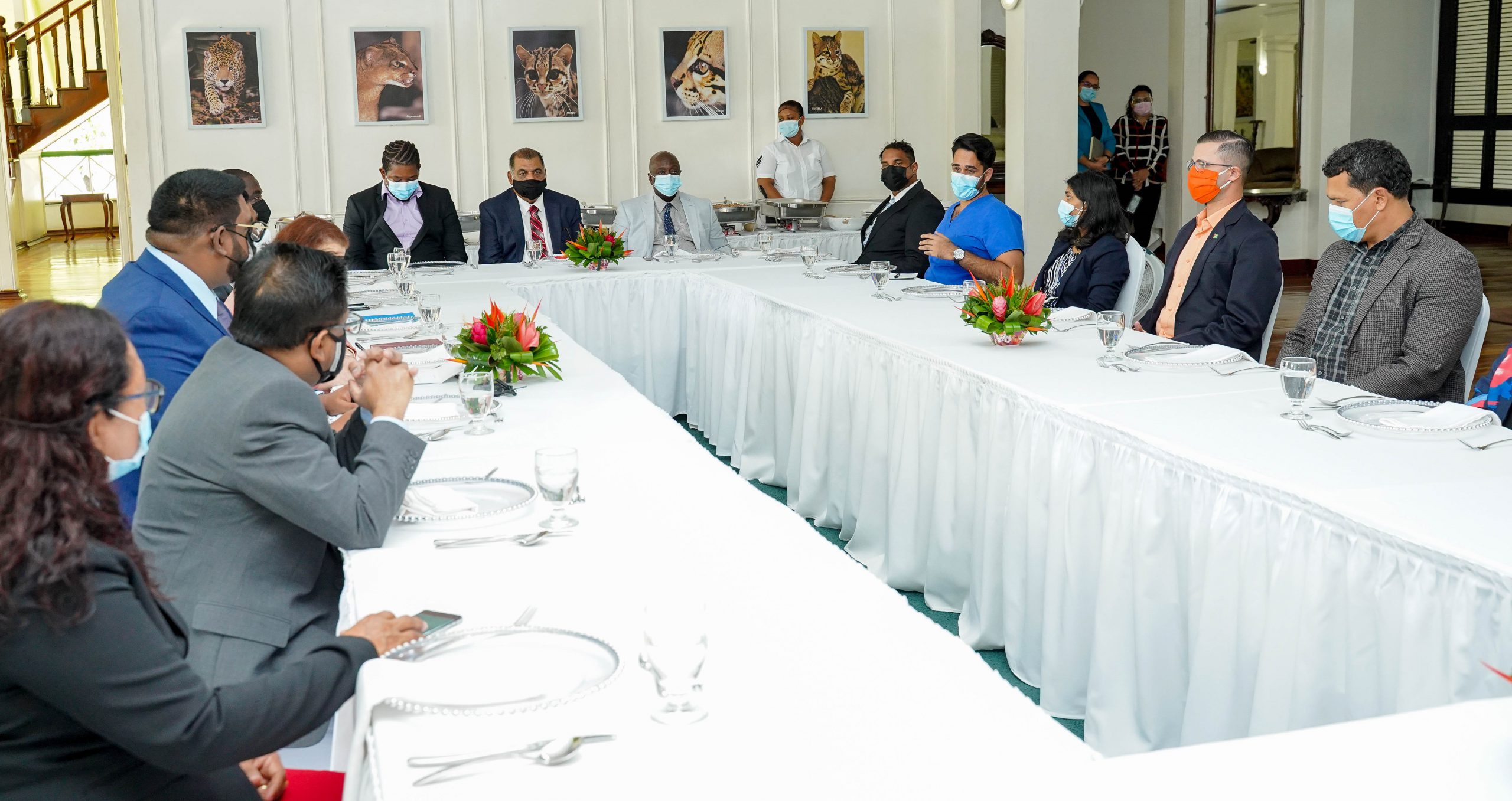 Georgetown, Guyana – (January 26, 2021) His Excellency Dr Irfaan Ali today reiterated his commitment in engaging all stakeholders to ensure that Government’s plans and programmes reflect the priorities of the people.

The Head of State gave this assurance during a working lunch at State House with representatives from Guyana’s small political parties, who were invited to discuss Budget 2021.

“You are all stakeholders in this process. And as we have embarked on Budget 2021, I thought it necessary that at least we have a working lunch and examine some of your thoughts, some of what you see as priorities, so that we can have a discussion, so that we can consult, so that we can arrive at a programme in which all of Guyana feel as if they’re part of it.”

Present at the engagement were representatives from A New and United Guyana (ANUG), Liberty and Justice Party (LJP), the Citizenship Initiative (TCI), the New Movement (TNM), United Republican Party (URP) and Change Guyana.

President Ali pointed to the importance of “collective ownership” of the development trajectory, which he said will not only lead to greater prosperity and prospects but will pave the way for the opportunity to unify the people of Guyana.

“And that is the greatest project we have that is utmost on my mind… We can build a country that is strong, prosperous and economically viable. That takes critical thinking, that takes vision, that takes clarity, that takes action, but coming together and unifying requires a bit more.”

The President emphasised on the need to break down “selfish barriers” and to embrace new ways of thinking and behaviours in order to achieve this.

He said that Government’s approach moving forward will be to engage in an innovative manner, which is being initiated by the Budget 2021 discussions.

“These are some of the things that we want to capture in an innovative and new manner, not only in Budget 2021, but in the agenda moving forward…So, it is my honour and privilege to once again engage with you in this forum.”

President Ali reminded the visiting politicians that his government had reached out to former President David Granger in a similar manner of inclusivity.

“We have been reaching out and trying our best… I invited former President Granger to a meeting that he did not attend and then we have the one component of the opposition who are still mischievously peddling the agenda that the Government is illegitimate so we have to deal with things in context… that narrative has to be corrected.”

In his remarks, Dr Ashni Singh emphasised on the importance of the engagement in finalising Budget 2021.

“In order to ensure that we outline that vision in the most comprehensive way possible and in order to ensure that we identify the most critical interventions that are needed now and that are needed to lay the foundation going forward, we want to ensure that you get the widest possible cross-section of views. You are important stakeholders and we would like to hear from you.” The Minister further asked those in attendance to share their visions of Guyana’s future and to highlight the critical needs of the country.

Dr Singh also used the opportunity to express appreciation and a sense of “indebtedness” to those present for their role in ensuring that Guyana remains a democratic country. He said too that the victory is one that must be preserved going forward.

Meanwhile, Minister Teixeira expressed her appreciation to the representatives present for acknowledging the invitation by the President. She noted that the engagement was integral for the country to move forward in an inclusionary manner.

“For me and my sector governance this is a very important meeting in terms of inclusion, in terms of involvement and in terms of being able to sit down and to come up with what is in the best interest of our country and our people. And so, this forum, I believe, offers that opportunity, particularly around the 2021 Budget. I’m sure, knowing the President this will not be the only such forum that we will be creating for dialogue discussions with various civil society bodies, political parties.”

Following the remarks by the Head of State and Ministers present, representatives from the small parties expressed their opinions on the impact of today’s engagement with the President.

Dr Vishnu Bandhu from the URP said the discussions provided the platform for all parties to collaborate, to move the country forward and to bring the people of Guyana together.

Dr Abedin Kindi Ali from Change Guyana added, “I am here on behalf of our party to participate and to give some input on the 2021 budget… we are looking forwards to a meaningful discussion.”

Meanwhile representative from A New and United Guyana, Ms Aruna Budhram said, “I am very heartened that there is this will to reach out … I understand that there is a duty and an obligation and because of that I am very happy that we have a voice and that we are able to participate in this process.”

ANUG member, Mr Kian Jabour expressed appreciation for being included in the process and towards the Government for reaching out.

Representative of the joiner parties in Parliament, Lenox Shuman said he was looking forward to the opportunity to engage with the Government on aspects of Budget 2021.

Ms Asha Kissoon from The New Movement said, “ I must say that the efforts that we have seen so far to kick start the economy have been fruitful … we look forward to the discussions today, we have some inputs and we are happy that we are able to voice our concerns.”

Along with Budget discussion, the small parties were also briefed on the development in Venezuela.