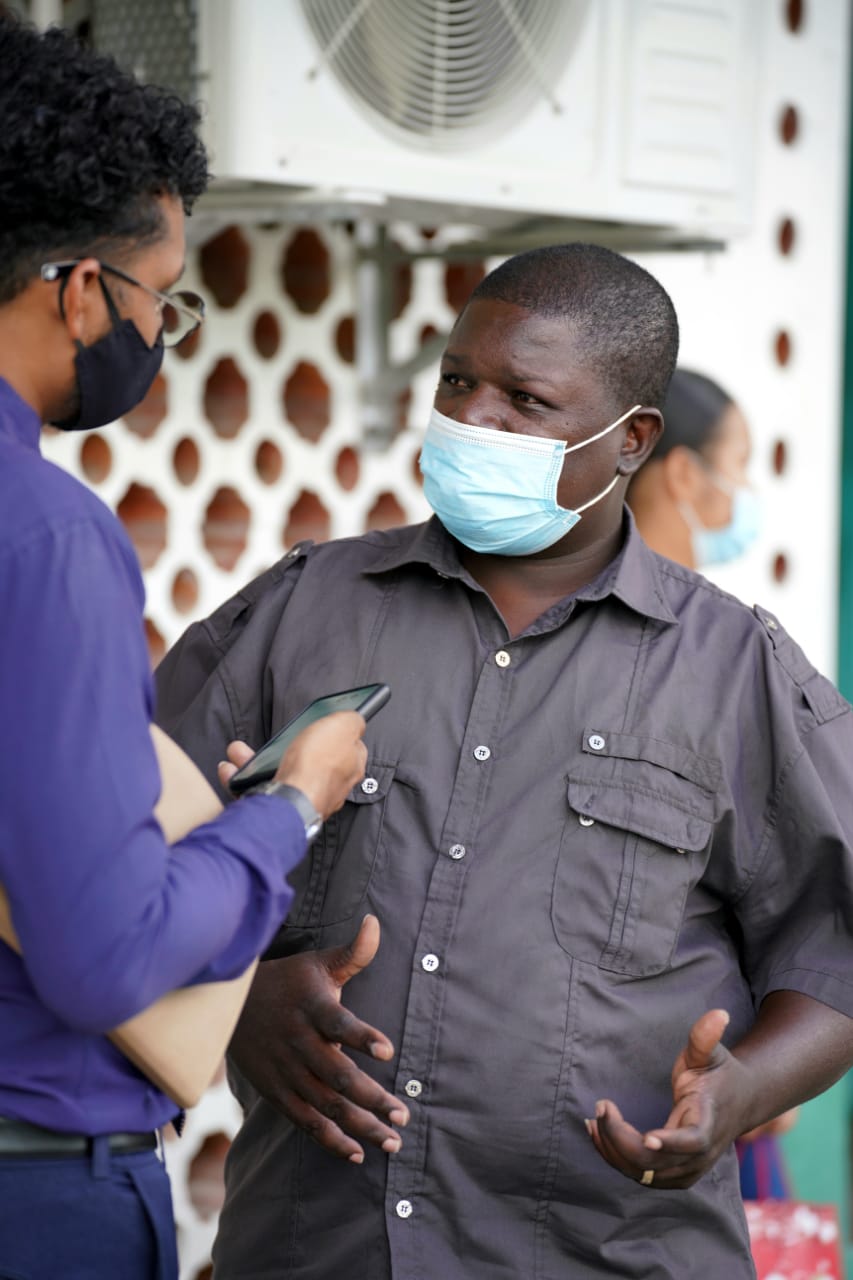 Re-migrant Peter Baptiste was ready to give up on his dream of developing a logging and value-added business, but President Irfaan Ali renewed his hope by assuring him that he will obtain a lease for a piece of land he has been waiting on for years.

Baptiste returned home sometime in 2017 with high hopes and dreams of investing in a logging exporting and value-added business in Linden.

Speaking to President Ali at a presidential outreach in Linden today, the 45-year-old explained that when he re-migrated to Guyana some four years ago, he sold all his assets from his minibus service in order to purchase five logging trucks that are valued at approximately $60M. He also secured other assets to start his dream business.

“My intention was to come back and open up a sawmill, a furniture store and to export lumber and lumber materials. I even already had investors prepared from St. Lucia and the United States of America ready to do business, but the previous administration did not have a vision and that started my first problem,” Baptiste explained.

He noted that when he inquired for assistance and guidance from ministers of the previous government, he ended up with blockade that resulted in his vision becoming stagnant.

“One time I called a Minister and she kept asking me how I got her number and so I said Minister I need some assistance and she switched off her number from me,” Baptiste said.

“All of that was frustrating and my business ended up running flat because I was not getting to do what I wanted to do. What I did was ended up having to get refund for the trucks and I even wanted to leave and go back.”

Despite being discouraged, Baptiste said he knew that the Government would have changed at the last General and Regional Elections.

“I saw this Government with a vision and I wanted to work with this Government. I am not about APNU and this and that. I am from Linden and looking for a Government to work in my best interest. I was really planning on packing up and leaving but I decided to stay and now I am happy about that.”

Baptiste was also having issues with obtaining a lease for lands he had applied for in the Moblissa area. After explaining his issues to President Ali, he was instructed to speak with the representative of the Guyana Lands and Surveys Commission (GLCS) and was told that he would be receiving the lease he applied for tomorrow, which amounts to two acres of industrial land.

“Now I will be able to get my lease and one of my issues have been solved just like that after years of waiting. The businessman said that he is now optimistic that not only his issues, but issues that other residents face, can be solved.

“President Ali rejuvenated my dreams, my vision and because of him I have been encouraged to invest more in my country. I never believed that I would have been able to sit in front of a President and speak in such an informal and casual setting. I believe this is a government for the people and I am happy,” Baptiste said.

The Lindener was part of a group of miners, farmers and loggers who came to the Watooka Guest House to speak to the President.

Most of the issues raised by the residents of the region surrounded infrastructural development, inclusive of access roads to lands, bridges, drainage and irrigation and land allocation. The residents also raised various issues surrounding the inefficient management of local mining, logging and farming groups.

They were told that budgetary allocations have already been made for the 2021 budget to fix some of the access roads and bridges that have stymied their progress.

Linden Duncan also raised the issue of the inability to obtain long-term loans while having short-term leases.

President Ali indicated that the financial institutions, government and residents must come to an arrangement that would benefit everyone.

The members of the group said that they were overall satisfied with their interaction with President Ali and while it was a “once in a lifetime experience” they are hoping to have similar interactions again soon.