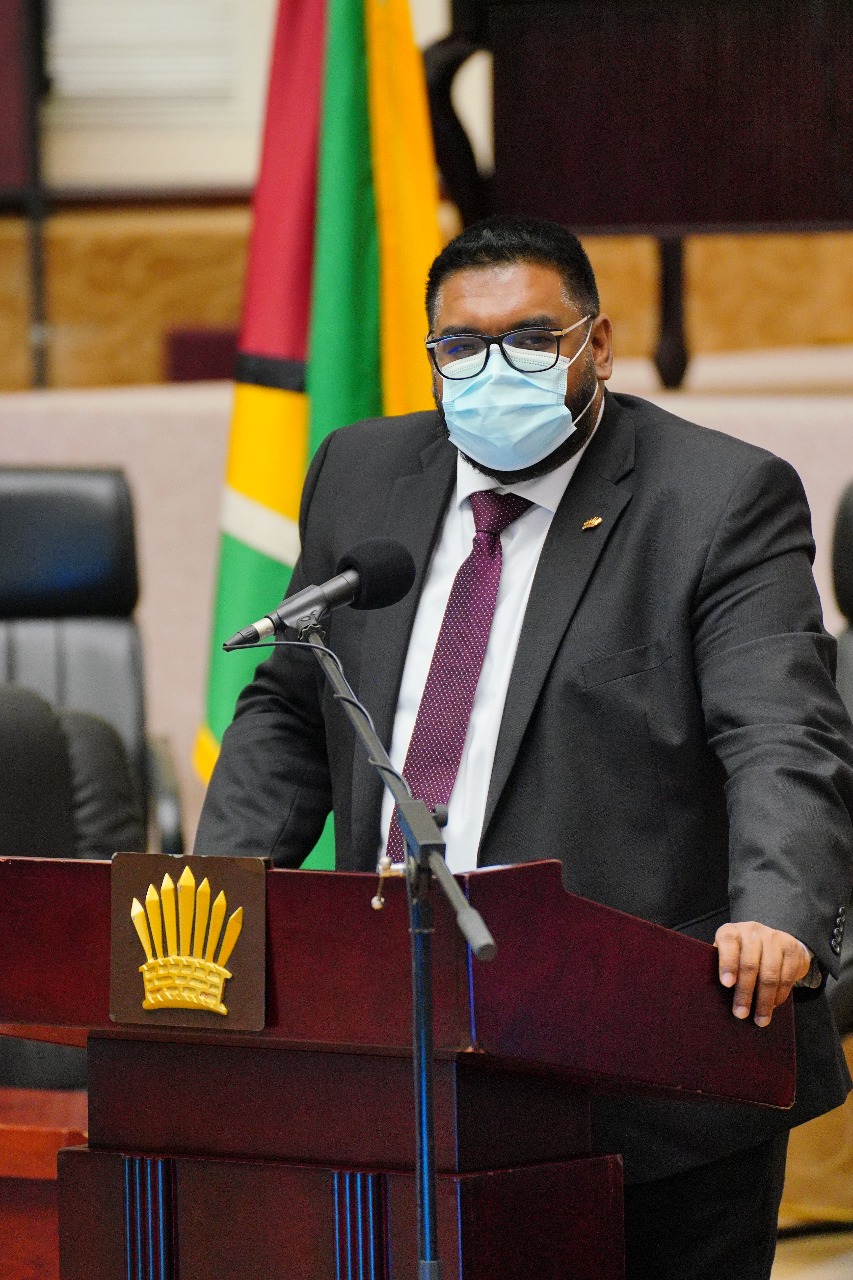 His Excellency Dr Irfaan Ali urged Guyanese living in Canada to return home to invest as he signaled his Government’s commitment to ensuring an enabling environment for economic prosperity.

The Head of State made his ardent appeal last evening virtually during the feature address at the Guyanese Republic Jubilee Awards Ceremony and Presentation organised by the Guyana Consulate in Canada.

He accepted that there are areas in which the Government needs to improve in order to create a conducive atmosphere for growth and development.

“We acknowledge the areas in which we have to improve to make you comfortable in an environment you are accustomed to, speed at which you get service; quality of service. We are not hiding from these things. These are things we have to fix and we are fixing.”

The President further encouraged the overseas based Guyanese to be bold and pioneering in their endeavours and promised that they will be welcomed.   “We are in this together. We want you to come. We are waiting on your arrival. We know you are committed, we know you have love for country, take the bold step.”

Meanwhile, the Head of State also spoke about his Government’s economic modernisation and infrastructure transformation plans.

“Our Republic is on an upward trajectory. We are constructing a more modern, diversified and resilient economy.” He said that although Guyana is now an oil-producing state, the country is still looking to diversify.

In this regard, the President noted that his Government intends to modernise and grow the aforementioned sectors and is especially committed to reviving the sugar industry in a “smarter manner” by moving production up the value-chain and by diversifying the industry.

A modern economy, President Ali said, which is capable of rebounding from internal and external shocks requires transformative infrastructure.  He pointed to the developmental plans in place, including: the completion of the East Coast Demerara Highway; the resurfacing of the East Coast Railway Embankment from Sheriff Street to Enmore; the remodelling of the Linden to Lethem Highway and work on the Linden to Mabura Hill section. The President also pointed to the construction of a road link between Ogle and Diamond, the development of a four-lane highway between Georgetown and Timehri, a road link between Parika and Rockstone and a new high-span bridge across the Demerara River, which he estimates will be completed before the end of 2024.

“We are working with the Republic of Suriname to bridge the Corentyne River and to create a corridor which will link French Guiana and Suriname to the East of Guyana and thence southwards to Brazil and other continental states.”

The Head of State added that a deep water habour, a new international airport at Lethem, industrial parks and free-trade zones will integrate Guyana’s economy with more powerful markets and convert the country into a major economic hub in the Western Hemisphere.

Additionally a mix of energy projects including solar, wind and natural gas will also help to ensure energy security and reduce the cost of energy by 50%, which is expected to stimulate and boost the competitiveness of Guyana’s manufacturing sector.

President Ali also explained that included in the “transformation and transportation restructuring” is an upgrade of the maritime transit, which will see investments in new boats and ferries to the Northwest, and along the Essequibo and Berbice rivers.

Air Transport is also essential to the transportation plan.  The President noted that his Government has “renegotiated and we were able to get back two additional bridges for our airport, more commercial space, and have the contractor agree to complete a full rehabilitation of the front of the airport, all at no cost to the government”.

He said that the government has launched an aggressive marketing campaign to encourage airlifts to Guyana, with the aim of presenting the country as an air transport hub for South America.

“We have got tremendous traction. Unfortunately with all the work we have been doing we have not been able to break into the Canadian market, but I assure you, I am confident that within the very near future we will have very good news for the Canadian market and Canadians in terms of air transport for Guyana.”

QUALITY OF LIFE AND SOCIAL SERVICES

President Ali used the opportunity to remind the diaspora of the planned housing programme that is aimed at providing 50,000 house lots within the next five years, with more than 3,000 already being distributed in the past week.

There are plans in the pipeline to also improve the delivery of education by increasing its access and expanding information technology initiatives.  “We are creating a 21st century education system. The One Laptop Per Family Initiative will be reintroduced in the coming year. We are providing 20,000 scholarships. We hope to provide free education at the University of Guyana by the end of 2024. In our Emergency Budget for 2020, we made provisions for doubling the uniform allowance and increasing, by 50%, the cash grant per student from $10,000 to $15,000. We are committed to increasing this by almost 300% in the coming years.”

Additionally, he reminded his audience of Government’s plans to advance the country’s health system with a strong focus on primary healthcare and intensified support to the vulnerable including the elderly, children, women and persons with disabilities.

“Guyana will roar again. Our Republic will become stronger and more resilient. I want to thank all of you for your interest in developments back home. I want to encourage you to play your part in the transformative process which is taking place. Guyana needs all hands on deck, including the members of the Diaspora who possess the skills and the resources which are needed to fulfill our ambitions over the next ten years.”