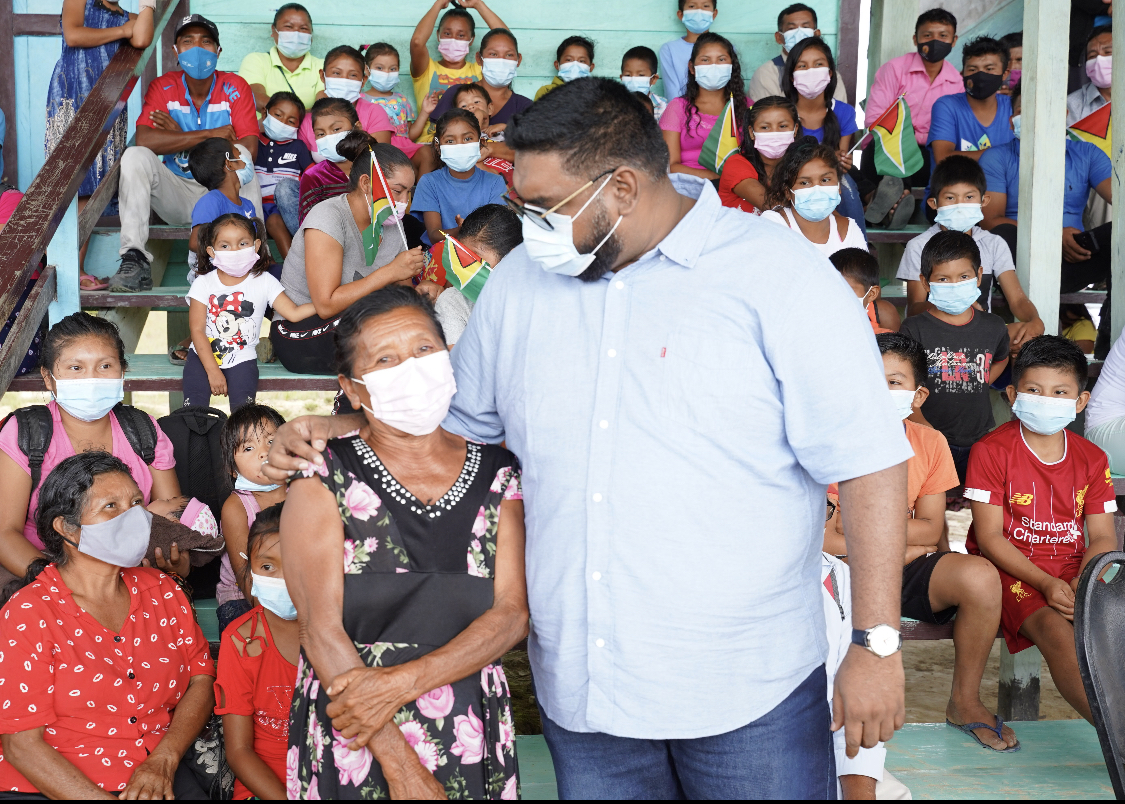 -Extension to dorms other projects possible in 2021

Georgetown, Guyana – (December 23, 2020) Residents of Kato in Region Eight (Potaro-Siparuni) have praised His Excellency President Irfaan Ali and his team for their proactive approach to concerns affecting the mountainous community.

The Head of State and a high-level delegation, including the Chief of Staff of the Guyana Defence Force (GDF) Brigadier Godfrey Bess, the National Security Advisor Captain Gerry Gouveia and other government officials,visited the community on Tuesday to interact with residents and to listen to their pressing concerns.

The President implored the residents to identify key areas which can be addressed in the swiftest possible time and which will have the most impact.

After consultation, it was decided that residents had need for improved education, infrastructural works, an upgraded water system, agricultural development and enhanced recreational and sport activities.

President Ali said that he intends to get the ball rolling early in 2021.

“By the end of the first quarter next year we will ensure you get a 75 horsepower four-wheel drive tractor and trailer, that’s the first one. For the second one I will talk to the Minister of Finance and the budget team when I get back to put the extension of the dormitory in the budget; the third one is the water system; as soon as we go back we’ll have a meeting with the Army, GWI and our staff at OP to put together a team to come to work with you locally in putting in the water system from the spring to come down,” the President announced.

He also put systems in place to assist the local farmers.

He asked the Vice Chairman of the Region to submit a list of agriculture produce from the communities, including Kato, to determine what the government can purchase for consumption.

The residents were eager to express their appreciation for the President’s swift actions following the official programme.

In her remarks Sharon Salvador, the Headmistress of the Secondary School said, “I am very happy that he [the President] is here.” She added that she was also glad that he kept his promise of revisiting the community, which he made while on the campaign trail.

“As a resident of Kato village I know now that things will be put in place for the improvement of our communities.”

Jenessa Gomes the Community Health worker and resident was also elated with the visit, “It is a pleasure having the President in Kato… he said he was coming back and he kept to his promises. In the past we were having problems with water, it was an issue before; he said he is doing the water, the roads are very bad. In the past they said they were doing the roads and nothing was being done and with the rain it is getting worse, transportation is also a big issue. I think he said he is going to do something about that.”

Mr Trevor, the overseer of the region said that it was a privilege to have an open discussion with the President.

“Based on our conversation, I can say that it was a very fruitful and productive one. In terms of our request for water delivery, and upgrading the transportation system and secondary school; it was of a very good nature and I expect that we will see results out of this in the coming weeks.”

Meanwhile the Deputy Toshao, Gerald Rodrigues said, that he was pleased that the President took time out to listen to his concerns.

“I am happy… I put forward my proposal to the President and I am so happy that he gave me assurance that my concerns will be looked into. I am very grateful for putting up my proposal to him for the benefit of my sub region and the community. We raised these concerns at various forums but never got this kind of response but the President gave his assurance that he would ask his team to look into our concerns.”

Meanwhile, the Village Toshao Clifton Perreira welcomed the contingent to the community and expressed his appreciation for the intervention.