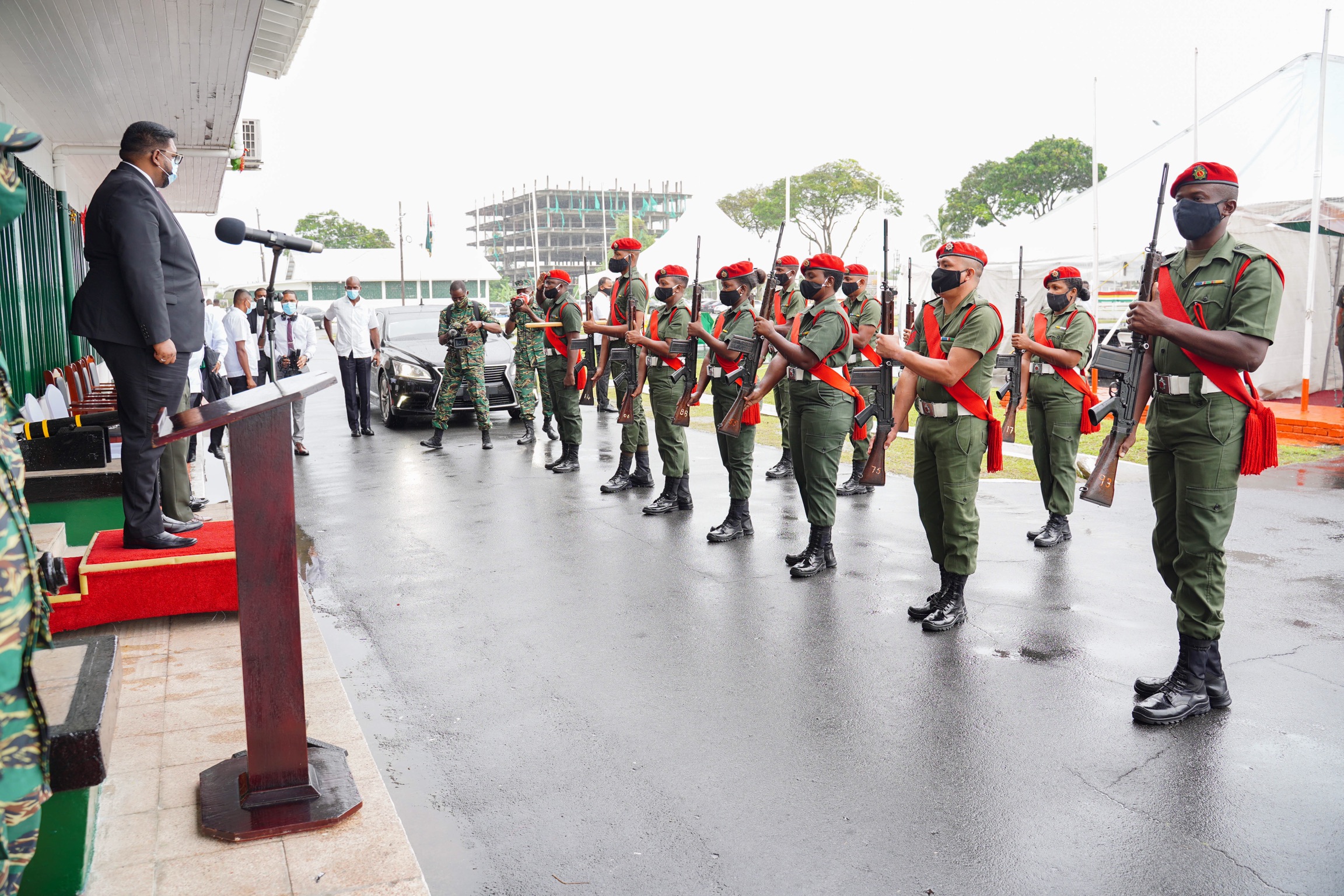 His Excellency Dr Irfaan Ali told hundreds of ranks of the Guyana Defence Force (GDF) that the country must continue to stand united in defence of our territorial integrity and sovereignty.

The Head of State was at the time speaking at the GDF’s annual Christmas Lunch at Base Camp Ayanganna.

In his feature remarks, President Ali reminded the ranks of the earlier judgment from the International Court of Justice (ICJ) that said it has the jurisdiction to hear Guyana’s case seeking the validation of the 1899 arbitral award establishing the boundary with Venezuela.

The President explained that the decision by the ICJ removes an “important hurdle” in resolving the long-standing controversy between Guyana and Venezuela and gives the country a chance to put its case to the court.
“I take this opportunity once again to thank all the stakeholders, our technical staff, the lawyers, successive governments, and importantly all Guyanese for their unified stance on this issue. It indeed shows us what unity can do for us as a country, what coming together can do for us as a country.”

He further reminded the ranks of Government’s commitment to providing housing and educational opportunities to them, as well as improved health care services.
“We see you owning your own house lots… own your own homes and come next year we are going to commence this process,” President Ali explained, while noting that the Government will ensure that there are special housing programmes right at the headquarters of the GDF to facilitate the ranks.

He also highlighted that the ranks of the GDF will be able to be part of a special programme to ensure that they benefit from the 20,000 scholarships that the Government will be making available for citizens.

Additionally, in order to better facilitate the ranks, President Ali explained that a system will be set up to have the ranks select scholarship awardees based on merit and performance.

The Head of State reasoned that these opportunities will be provided not only to improve the institution but also to move it forward.
“We have some exceptional talent, great brain power in the Guyana Defence Force but we have to utilise that talent and our brain power for national development. And I’ll assure you this is the direction we are going to go towards.”

This is why, he explained, there is a clear outlined strategy for enhanced roles for ranks of the GDF and officers in community development; and overall national development.

He stressed that the ranks will become part of the national security architecture and will be utilised to give logistical support to the Government.
“I want to assure you that we have already started the discussion on how we can make things better, and whilst I have had a lot of this discussion at the top, be assured that in the coming year I’ll be visiting all the units to hear from you, to listen to you and to understand your perspective on the improvement of the Guyana Defence Force.”
President Ali told the ranks that despite the COVID-19 pandemic, the Government was still able to provide a two-week tax-free bonus that will be paid before the end of the year.
He proclaimed that this will only improve because “there is no other direction for our country and our people than a forward, upward direction”.

The President charged the ranks to not only recommit to Guyana, but also their oath of office, to the people and to give their best to the country and citizens.
“I have seen the respect and regard the population give the uniform you wear, the honour they give the uniform you wear. But equally, we must earn and show we uphold our oath, we must earn and show that we also bring dignity and honour to the uniform we wear. And I ask you today to recommit yourself to the country.”