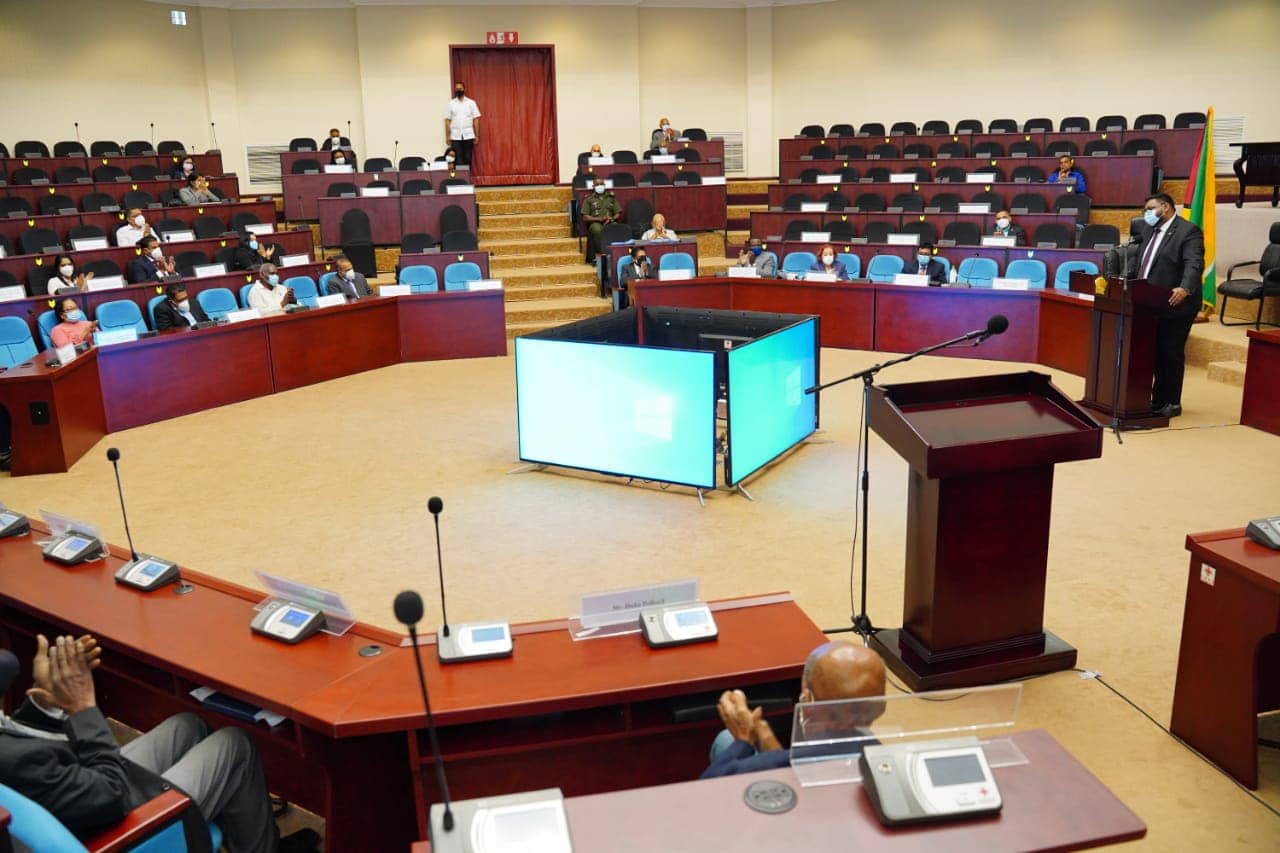 Says results testament to what we can achieve as a people

Georgetown, Guyana (December 18, 2020)— President Irfaan Ali feels that the International Court of Justice (ICJ) ruling this morning should be celebrated by all of Guyana and should be seen as a healing point for the country.

The President, members of his Cabinet, former Speaker of the National Assembly Dr Barton Scotland, former Minister of Foreign Affairs Carl Greenidge and other officials were at the Arthur Chung Convention Centre to view the historic ruling by the ICJ that it has jurisdiction to hear Guyana’s case seeking the validation of the 1899 arbitral award establishing the boundary with Venezuela.

A jubilant eruption resonated around the venue when the announcement was made on the visual monitors and President Ali instantly called and thanked Sir Shridath Ramphal – Guyana’s first Attorney General – who led Guyana’s arguments and Paul Reichler of international law firm Foley Hoag, who represented Guyana.

The President said it was a privilege to speak to Sir Ramphal, but noted that the victory was one that took hard work and dedication from many persons, over many years.

“I want this morning to go beyond our lawyers and our legal team, I want to thank all of those who played such an integral part of this process, the names are too many to mention, many of whom are in this room.”

President Ali pointed out that despite political differences Guyana’s Governments over the years have been steadfast in their desire to protect our sovereignty and resolute in defending our territorial integrity.

The President noted that the ruling was a great victory for Guyana and it should be used to unite the country going forward.

“This victory is testimony to what we can achieve as a people when we are united and this should be a healing point for our country, there is no compromise on our sovereignty, we are together on this. And it is with this same spirit that I think we should be together on the development and future of our country.”

The President also thanked the United Nations for choosing the court for the resolution of the case and was hopeful that Venezuela, who had opted to not participate, would reconsider its decision.

“I express the hope now that the court has ruled decisively in favour of the jurisdictions to rule on merits that our neighbours would consider participating fully in the proceedings.”

Minister of Foreign Affairs Hugh Todd also called the ruling a victory for Guyana. He said that it was also a victory for multilateralism, indicating that Guyana likes to be on the right side of the law.

The Minister said that although Guyana respects the Venezuelan people, it is imperative that Guyana protects its territorial integrity and sovereignty.

Despite the ruling, the Minister noted that there was still a lot to do, but was confident that an end to the process is in sight.

Meanwhile former Minister of Foreign Affairs Greenidge was also happy with the decision, he thanked the advisory committee, Cabinet ministers and foreign affairs officers who worked on the matter.

As a result of today’s ruling the court would proceed to hear the merits of the case, it will decide and judge on Guyana’s claim, which could result in the permanent fixture of our established boundary with Venezuela.