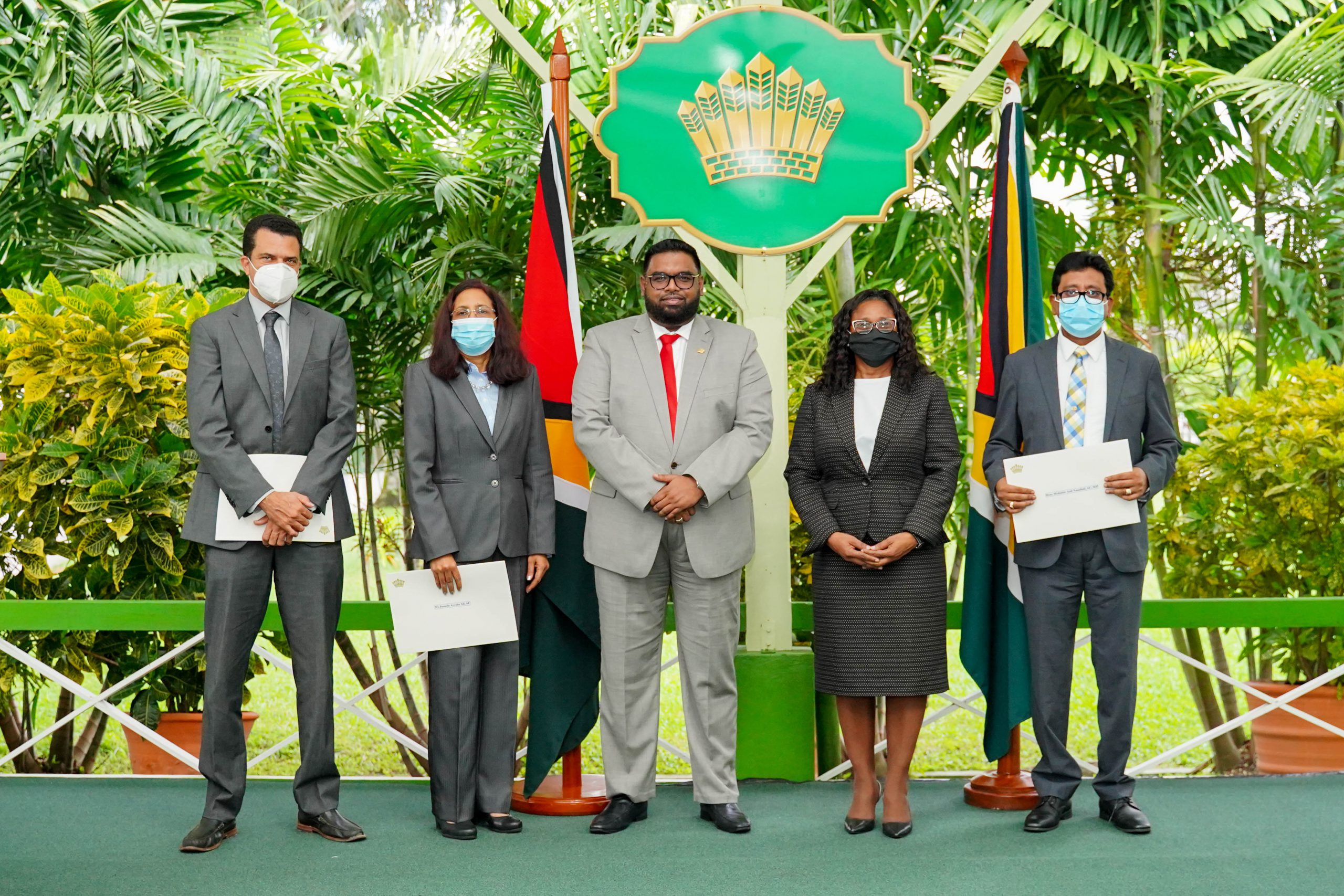 Georgetown, Guyana (December 17, 2020)—His Excellency Dr Irfaan Ali officially elevated three legal luminaries to the status of Senior Counsel, effective from October 30, 2020 while acknowledging their “high standards of excellence and experience in the legal profession”.

The three Senior Counsel, Attorney General and Minister of Legal Affairs, the Hon Anil Nandlall, Mr Timothy Jonas and Ms Jamela Ali took their oaths in the presence of the Head of State, Government officials and their family members at a ceremony held this afternoon at the Biribi Benab in State House.

“Today I am pleased, as President of the Cooperative Republic of Guyana, to confer the title of Senior Counsel on three eminent members of the legal profession. Their records of excellence and sterling service exemplifies the high standards to which the legal profession aspires. The conferment of Senior Counsel on these three legal luminaries is meritorious and deserving.”

President Ali reminded the new Senior Counsel that their title has long been associated with standards of distinction.

“The conferment of ‘Silk’ is a mark of quality and thereby a means of enhancing public trust in our legal system. Such appointments will repose greater confidence in the efforts to ensure a more efficient and effective system.”

The Head of State noted too that public confidence in the administration of justice will only be enhanced by the presence of persons who embody the high standards and traditions of excellence and service, within the legal system.

Such standards, he stressed, are therefore reinforced by such appointments which are based on merit and which can inspire greater respect for and confidence in the legal system.

The President added that an effective and efficient legal system is essential to the social contract between citizens and society, who look to the legal system to secure peace, to deter violations of the law and to protect their individual rights.

He said that without such guarantees, society would be disorderly and unstable.

“It therefore remains an obligation of all – government, citizens and particularly members of the legal profession – to work to ensure an effective and efficient legal system, where Justice must be affordable, accessible, swift and fair. These are the foundational principles which should and must guide justice administration in Guyana and which will enhance public confidence in our justice system.”

President Ali congratulated the newly sworn in Senior Counsel and wished them continued success in their careers as he presented them with their instruments of appointment.

On October 28, 2020 the Head of State had announced that the appointments of the Senior Counsel were based on “their demonstrable knowledge of and learning in the law and on account of their exemplary erudition and diligence in the practice of the law and by virtue of their distinguished contributions to the growth and development of Guyana’s jurisprudence and constitutional democracy.”

The honour of silk is conferred on distinguished lawyers. This status is recognised by the courts and gives recipients privilege and respect.

Since members wear silk gowns of a specific design, the Senior Counsel are usually referred to as having attained ‘silk.’

The appointments follow today’s ruling by High Court Judge Nareshwar Harnanan that the President has the authority to appoint lawyers to Senior Counsel status.

The case was brought by Jonas who had challenged four Senior Counsel (SC) appointments that were made by former President, David Granger.

The proceedings filed by Jonas come more than a year after his Senior Counsel appointment was rescinded by former President Granger shortly after he announced his affiliation with A New and United Guyana (ANUG) – a political party which was formed to contest the March 2, 2020 General and Regional Elections. Jonas had described the move as “vindictive politics”, noting that such actions have “tarnished the whole image of Silk”.

Jonas was seeking an Order of Certiorari to be directed to the Attorney General to quash the decision by the former President to elevate Attorneys-at-Law Jamela Ali, Roysdale Forde, Mursalene Bacchus, and Stanley Moore as Senior Counsel.

The decision was first announced on December 31 and appointments were effective in January this year.

Jonas had argued that the former President’s decision was entirely void and of no effect.

While Jamela Ali was appointed by the former President, she did not acknowledge the role as a result of the pending legal challenge.

Reacting to the conferment, Mr Jonas praised President Ali for acting transparently and consulting the Chancellor of the Judiciary for confirmation of his appointment. Mr Jonas explained that when he was told in October that he was nominated for Senior Counsel he had indicated to the Head of State that he would not accept unless the judges gave their imprimatur.

“To my surprise he called me the next day… and he said he had received written confirmation form the Chancellor that the judges had approved my nomination and therefore I told him that I was willing to go again, subject to the pending litigation,” Mr Jonas explained.

He added that in December 2018 he was “appointed and disappointed” after he had received a call indicating that he was nominated for silk by the previous administration but the decision was quickly rescinded after his political party – A New and United Guyana (ANUG) – was formed.

“That kind of political interference is unacceptable. This President has demonstrated that he is better than his predecessor because he knows I do not support him politically and yet he was willing to accept the advice of the judiciary and do the right thing. I will give him credit for that,” Mr Jonas explained.

He further noted that while he is happy to finally achieve the marquee achievement in his lengthy career, he is disappointed that his mentor – Miles Fitzpatrick – is not alive to witness his achievement.

Mr Nandlall also related that he was ecstatic to finally be able to reach the “hallmark of any Lawyer’s career”.

“It is a point that establishes that the lawyer has reached a particular level of competence recognised by his peers, by the bench and by society. And that is a remarkable achievement. It is what every law student aspires to and what every lawyer aspires to. So it’s great reaching this status,” he said.

Mr Nandlall added that he always knew that he would have achieved the status of Senior Counsel but it was hard worked that pushed him to the pinnacle of a lawyer’s career.

“So it’s the culmination of years of hard work, but I am also cognisant of the responsibilities that are now upon my shoulders. Silk has certain responsibilities to carry oneself in a particular manner to display a certain level of rectitude and decorum, to be able to guide the junior lawyers, to be able to give pro-bono public legal advice to the less fortunate who can’t have access to justice like the rich and the powerful, and these are obligations which I plan to discharge to the best of my ability,” the Attorney General added while noting that he is anxious to embark on the new phase of his career.

Mrs Ali also echoed similar sentiments and said it makes her “absolutely happy” to be conferred the title of Senior Counsel after 31 years.

“I am going to continue to do the work that I do, give my best legal services, continue with my work in mediation in order to improve the administration of justice as well as arbitration and to continue publishing and do the best I can in the legal profession. I am going to continue doing my best whether I was conferred or not,” she said.