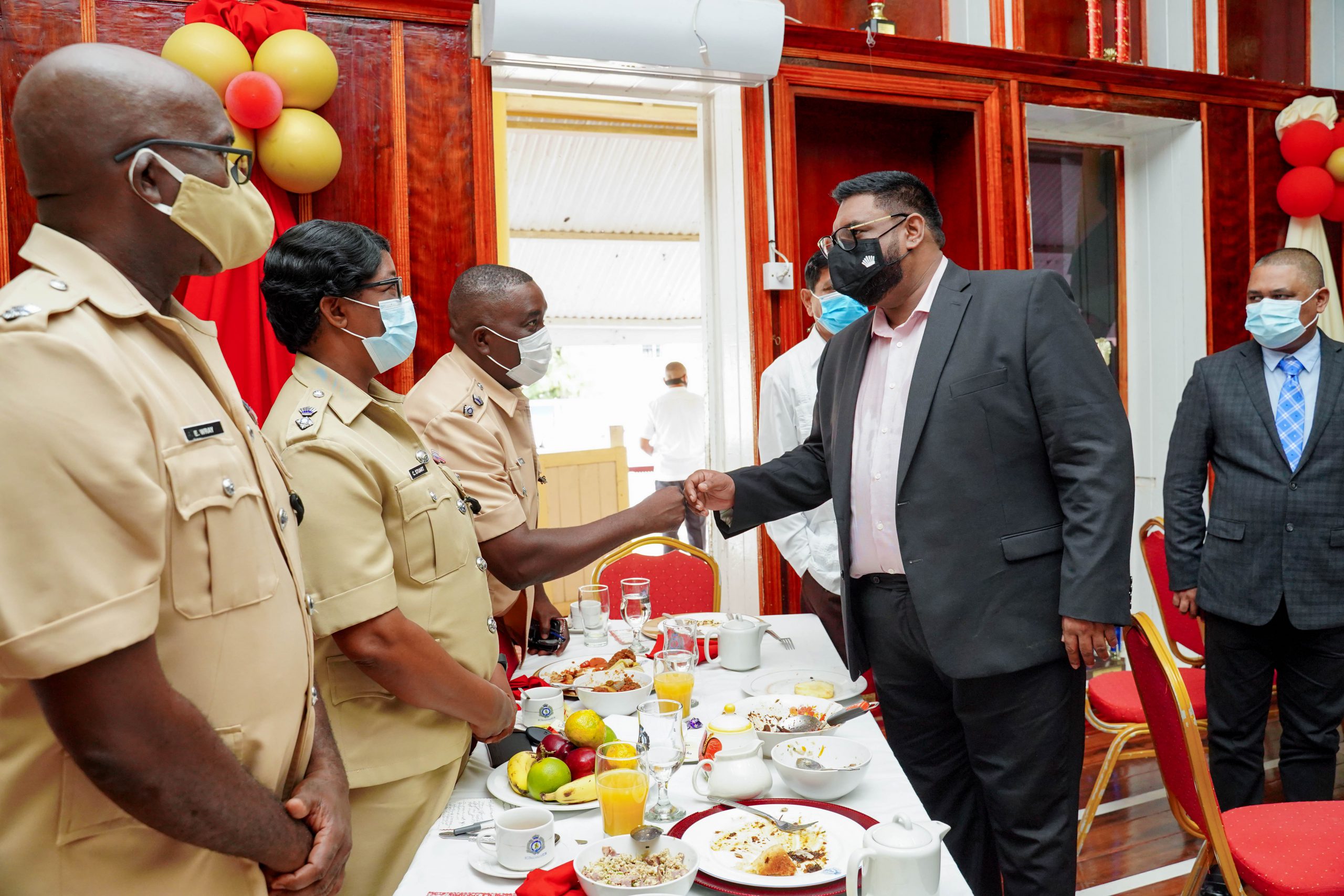 – Says Special Housing Programme will be initiated to enhance their welfare

Georgetown, Guyana (December 16, 2020) His Excellency Dr  Irfaan Ali told senior officers of the Guyana Police Force (GPF) that enhanced professionalism within the force will result in notable  improvements in the way they are viewed by the citizens of Guyana.

The President was at the time delivering remarks at the Annual Commissioner’s Breakfast, which was held this morning at the Officers Mess, Eve Leary.

“For you who serve in the police force, professionalism is the embodiment of everything you do. And I’m not asking for anything beyond that, beyond that professionalism that would see a remarkable improvement in the way the population views you, views your uniform, and the Government.”

He said this is critical as the force’s performance and the Government’s performance go hand in hand and are inseparable in the eyes of the population.

He urged the senior officers to build a legacy of success which is marked by teamwork, trust and commitment.

The President assured the officers that their welfare and that of their families are paramount to the Government and that they will see noticeable improvement in their livelihoods over the next five years, he however noted that this must go in tandem with enhanced performance.

“We expect to see marked improvement in performance. A lot of professionals believe that we should go on a case outcome basis for incentives in the police force, similar to a production incentive in all the industries. I don’t believe this to be the only way forward. Because we must never give the impression that our only driving force to resolve a case is incentives and rewards.”

The President then reminded the officers that their primary driving force should be their oath, commitment to office and their love for country.

Meanwhile, the President announced that his Government will work on a special housing programme to enhance the lives of all police.

“Part of our programme to ensure we enhance the welfare of not only the senior officers, but all ranks, is to ensure that we work on a special housing programme that will not only see ranks having access to house lots, but to ensure that we help them to qualify so that they can get loans and grants to build their homes. These are important things that add to performance, that adds to job satisfaction.”

The Head of State noted that capacity building in the force is integral to ensuring that members are equipped to benefit from all of the opportunities to come.

More importantly, the Head of State said that the institutional mechanism will be strengthened to ensure that given the high risk nature of their jobs, ranks will have the confidence in executing their duties knowing that their families will be taken care of and looked after.

“This is critical to job satisfaction… you will have confidence in yourself in going out there, knowing that there is a system that backs you up.”

He reminded them that they, along with all men and women in uniform, will also benefit from two weeks of tax-free bonus before the end of the year.

“We have announced this and of course you will benefit from this before the end of the year. We have also announced many initiatives that you are benefiting from in the COVID relief aspect of things .But we’re also looking at additional support that can enhance your welfare and improve your living conditions. As I said when I started, I assure you, your life will be better off, year after year over the next five years.”

In closing the Head of State thanked the members of the GPF for their service and urged them to be proud of their call to duty.

In his remarks, Commissioner of Police (ag) Nigel Hoppie provided an overview of the GPF’s performance over the last year and assured President Ali of the police force’s commitment in fulfilling its mandate. He said too that the force remains committed to learning from their challenges, improving professionalism and enhancing public trust and confidence.

Minister of Home Affairs, the Hon Robeson Benn was also a part of the annual Commissioner’s Breakfast.