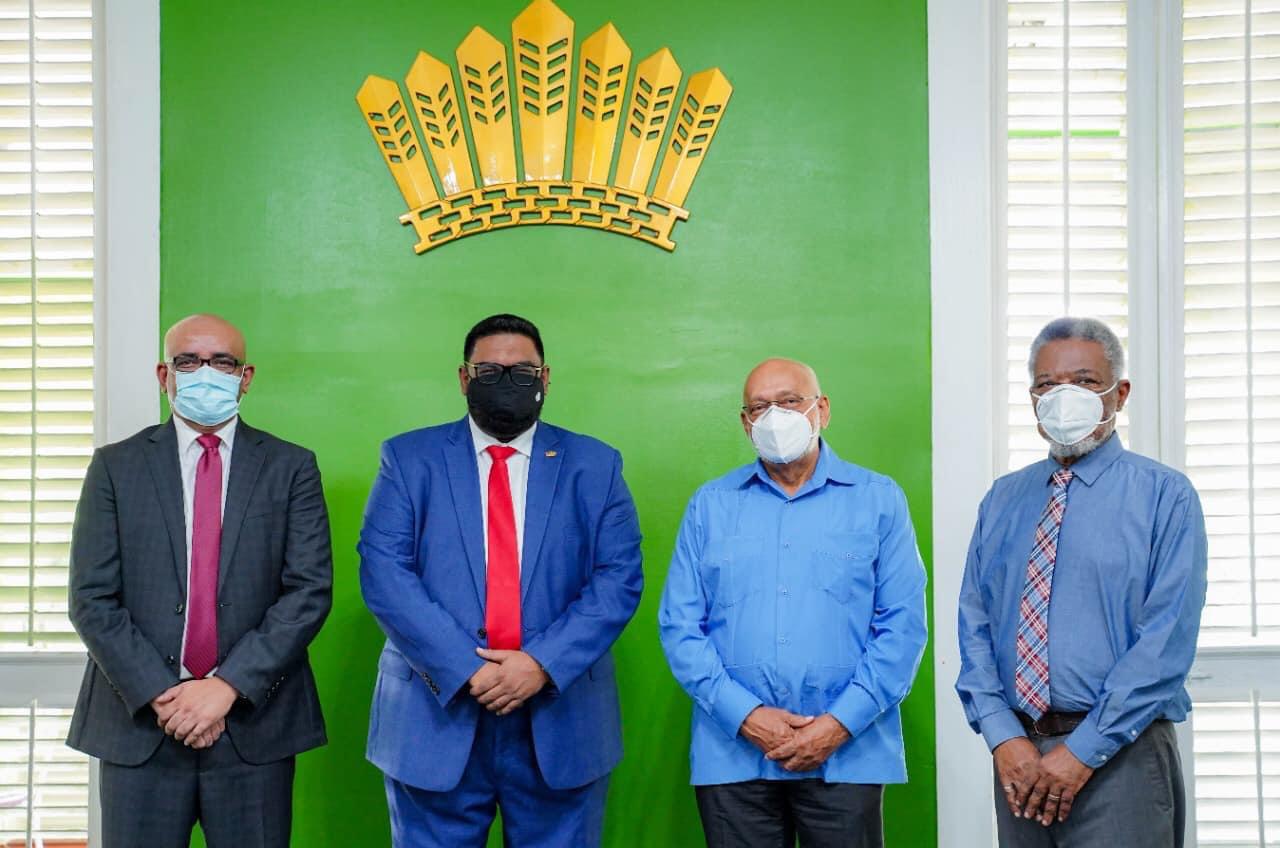 Georgetown, Guyana (December 15, 2020) His Excellency Dr Irfaan Ali said that today’s meeting with the former Presidents of Guyana was fruitful as key issues of national, regional and international importance were addressed.

Due to the headway following the initial discussions, it was decided that the group will now reach quarterly.

The Head of State made this announcement following the three-hour long engagement which was held at State House between himself, former Presidents Dr Bharrat Jagdeo, Mr Samuel Hinds, and Mr Donald Ramotar.

Notably absent from the high-level meeting was Mr David Granger.

According to President Ali, key areas discussed included border security, Guyana’s sovereignty and Electoral and Constitutional Reform, which he noted were of high importance. In addition, the former Presidents also discussed environmental concerns and spoke at length about the current Low Carbon Development Strategy (LDCS) framework.

“We have the Low Carbon Development Strategy as our framework and the former Government had a green strategy paper…  So engagement on the environment, covering issues of climate change, climate adaptation, mitigation, these are all issues that would have been encompassed on the discussions on the environment.”

On the absence of former President Granger, the Head of State expressed the hope that Mr Granger would understand the necessity in attending the meeting and being part of the discussions.

He noted that the former President would again be invited when the group meet in the first quarter of next year.

“It is a national effort in ensuring that we harness the ideas of our former Presidents who are still available to us.”

According to President Ali, job creation invariably came up in all the discussions.

He explained that the former Presidents also shared ideas and strategised on ways that would ensure strong local content and strong local participation, which would in turn guarantee our human resource base opportunities in oil and gas.

He said too that the participants also deliberated on national security concerns and examined strategies to enhance Guyana’s security sector.

Electoral and Constitutional Reform and National Unity were topics for much discourse during the engagement.

“Those are all the things that came up in the discussions; the whole issue of governance and how do we strengthen governance and ensure that governance is more accountable and responsive, easier to access.”

President Ali emphasised that today’s engagement would not bea “one off” occurrence, but rather the first of many high-level discussions among the former Presidents, which will allow for the sharing of information and more importantly dialogue to help chart the country’s development agenda.

“This is not a one off engagement, this is an engagement that will occur once every quarter and will involve all the former Presidents.” It is focused at a very strategic level. It is not at an implementation level.”

Alluding to the impact of the meeting, Former President Samuel Hinds said, “I think this was a good first step. And, yes, there needs to be [an] agenda … For me, I think this is more an opportunity to meet and talk freely and easily.”

Presidents agree that Constitutional, Electoral Reform should be people driven