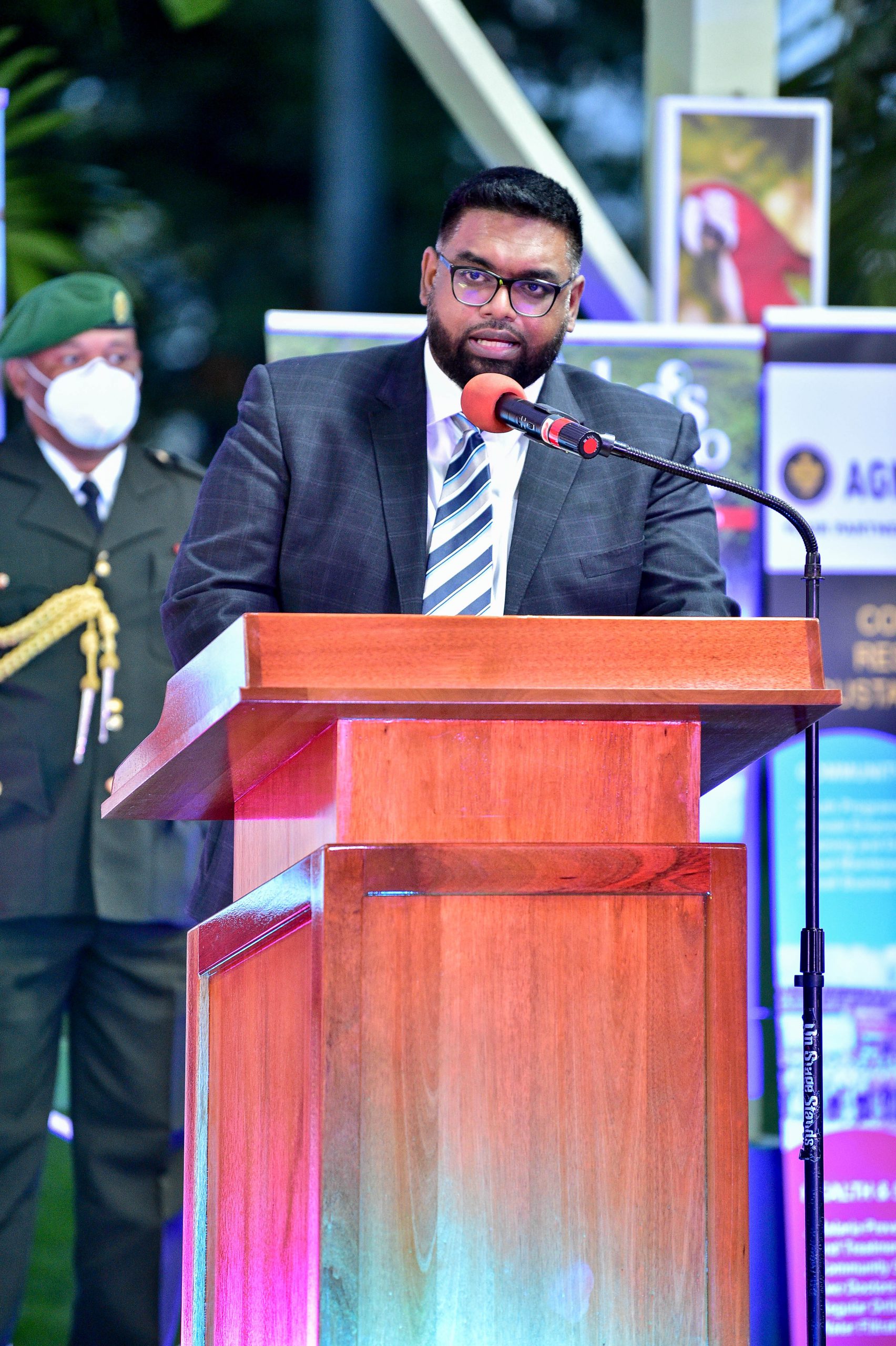 -Economy will transcend oil and gas

Georgetown, Guyana (December 2, 2020) His Excellency Dr Irfaan Ali said that local manufacturers and service providers will continue to stake their claim to national development while Government moves to fashion a transformative economic agenda.

The Head of State made this charge during his keynote address at the Guyana Manufacturing and Services Association’s (GMSA) 25th annual Awards Ceremony at the Baridi Benab at State House.

The President said that better times are ahead and that the business community should be excited.

“Development will leap-frog over the next decade.  Our manufacturers and service providers will be integral to the writing of this glorious chapter in our country’s history”

He acknowledged that despite the challenges of the past, manufacturing rebounded, which should be seen as a stark reminder that “strong people and resilient sectors outlast difficult times.”

President Ali outlined his government’s plans to boost manufacturing services as well as plans for the emergence of the ‘new economy’.

He pointed out that while oil production will provide the resources to accelerate this process, economic transformation did not start with the discovery of oil or the start-up of oil production. He said that his administration had initiated the realignment of Guyana’s economy decades before.

“We laid a solid foundation for economic take-off.  And today, despite the slippages, we are about to reap the rewards of the efforts we made to retool manufacturing and to stimulate and diversify services. Economic transformation will intensify over the next 10 years.  My present mandate is for five years, but I am thinking well ahead of those five years.”

The President said that the plans which are being implemented encompasses economic transformation in five foundational areas: higher levels of and sustained economic growth; the modernisation of the primary sectors – agriculture, fisheries, forestry and mining; the installation of transformational infrastructure, including for the support of manufacturing and services; rebalancing of the economy to boost value-added production; and improving efficiency, encouraging innovation and ensuring greater competitiveness.

‘’I want to assure our Guyanese brothers and sisters that while a lot of attention has been and is being placed on oil and gas, over the last three months we have seen remarkable interest, transformative interests in agriculture, fisheries, forestry and mining and you will see the results of these interests next year. We have been trying greatly to integrate the local private sector with multinationals, with large scale investors. And I’m proud to say to you that in the coming year we will all be happy at what will unfold; the level of collaboration; the level of integration and investments that will be made.”

The Head of State also announced that his government has commenced discussion on having a world class, world rated oil and gas Institute and training centre in Guyana, which will not only provide training for Guyanese, but for others across the region.

The President cautioned against becoming too dependent on imports while he pointed to the importance of his administration’s policies geared towards ensuring that the resources derived from growth are deployed in part to reinforce local manufacturing and services.

The economy’s expansion, he added, will open the floodgates to business opportunities.  It will also enlarge fiscal space to better address deficiencies in our productive sectors.  As part of this exercise, he said Government will promote policies to expand, strengthen and diversify manufacturing and services.

“I want to say today to the President of the Manufacturing and Services Association that your engagement with CARICOM must be bold.  It is time we break down the barriers to trade. It is time we stake our place. And whilst we have the capacity to invest in food security, the private sector needs to push hard on all the barriers that prevent our goods and services from entering a free market, an open market a unified CARICOM.”

President Ali said that the private sector and the manufacturing association have integral roles to play in every aspect of development.

“The private sector must be bold enough to recognise where there are challenges, where there are shortcomings. We have to come together, you have to form consortiums. The family approach to the business will fast disappear with a scale of opportunities that will come and the only way we can benefit from the scale of opportunities that will come is if we understand that we have to work together. We have to work together to improve our competitiveness.”

President Ali also revealed that today a Ministerial technical team was involved in renegotiating the partial scope agreement with Brazil to have greater quotas for Guyanese goods, more access and to expand the products that have access.

MODERNISATION OF THE PRIMARY SECTORS

He assured all that manufacturing and services will become a mainstay of the ‘new economy’ and that the traditional sectors, which continue to be a lifeline for tens of thousands of Guyanese, will not be neglected.

“Agriculture remains the stronghold of local food security. The traditional sectors are a vital market for manufacturing and services.  It therefore makes good economic sense to maintain these sectors and to modernise them so that they make an even greater contribution to national output and, in the case of sugar, rice and timber, to value-added production.

President Ali also announced that the Wales Development Authority will be tasked with the development of not only agriculture, but agro processing facilities, manufacturing and industrial development and will benefit from fiscal incentives to attract investment.

“In addition to this, we are in discussion with Brazil and Suriname on the new Deep-water Harbour and the road link to Brazil, the development of an energy corridor.” The President said that the Government is also looking at ways in which Guyana and Suriname will find synergies moving forward. “And of course, Brazil will be a key part of this. These are the bold initiatives that are already on the table to drive the transformation, to drive the change that is so necessary to create wealth and grow and expand our economy.”

President Ali said that his Government has already initiated discussions with developers to understand the full needs for the oil and gas sector and to determine what is required to service the sector. This he said is important in creating wealth and opportunities.

The President pointed to massive infrastructure developments, the development of the housing sector and the advancement of ICT.

In this regard, President Ali also announced that through engagement with QUALFON, a new investment in Tuschen (Region Three) will see the employment of 120 persons at a new call center.

President Ali proudly announced that the National Competitiveness Council will be resuscitated, and that the private sector would be playing a key role.

“Increasing growth and diversifying the economy alone do not guarantee prosperity. The key to success is competitiveness. The small size of our country’s internal market means that Guyana’s economy can only grow to the extent that it becomes more export-oriented. In order to become a global player Guyana’s goods and services must become more competitive. The high cost of energy has been a major challenge and constraint to the competitiveness of local manufacturing—we will fix this problem.”

In closing, the Head of State reiterated that manufacturing and services will be key pivots of the ‘new economy’.

He also acknowledged that President Ali assumed office under a high level of optimism especially among the private sector. Mr Nokta conveyed gratitude for the Budget Relief measures that came with the tabling of the $329.5 billion in the National Assembly.

“Mr President, the GMSA wishes to commend you and the government for not only presenting a budget so quickly after taking office, but also putting in place measures to combat COVID-19, open up the economy and restore economic activity….The measures provided much needed impetus to restore investor confidence and were a clear demonstration of Government’s commitment to restoring economic activities in the shortest possible time.”