Enhanced collaboration and integration between Guyana and Suriname- President Ali 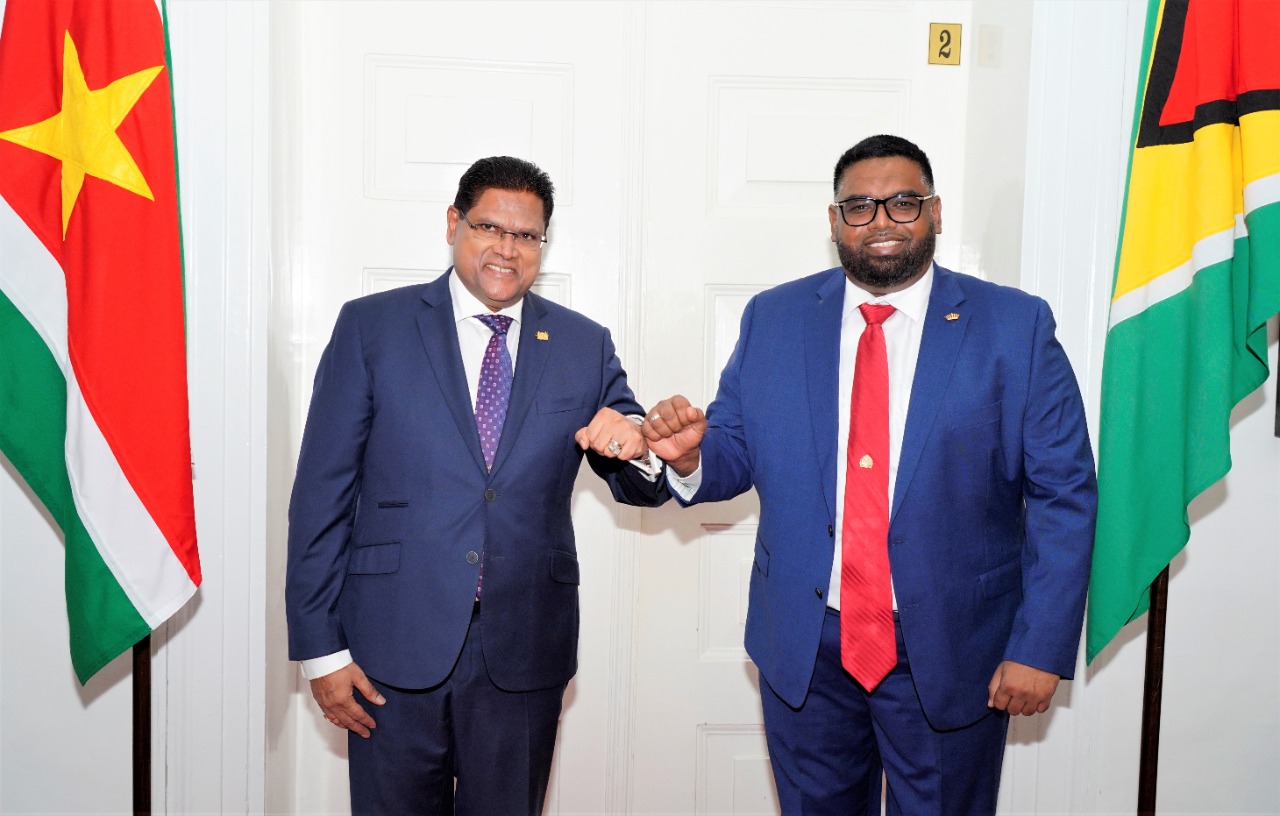 Paramaribo, Suriname (November 24, 2020) His Excellency Dr Irfaan Ali said that Guyana and Suriname have taken the important step to formalise a new cooperation mechanism which establishes a framework for dialogue to guide future collaborative efforts aimed at improving the lives of citizens.

The Head of State made this announcement earlier today at a joint press conference held in Paramaribo, Suriname, with the Surinamese President, His Excellency Chandrikapersad Santokhi.

“Guyana and Suriname share a mutual desire for an invigorated relationship through enhanced and sustained dialogue and a practical and effective programme of cooperation. During this visit we have already had the opportunity to review the progress made on issues we had agreed upon in August. We also discussed several other areas for possible cooperation. We have taken the important step by formalising a new cooperation mechanism.”

President Ali said too that immediately following the press briefing, the joint working groups were expected to meet and activate the work programme.

The President outlined other areas of collaboration during his visit, including transportation which is integrally linked to trade and tourism.

“In view of the critical role the ferry service plays in the movement of goods and people, we have agreed that issues affecting the resumption of the ferry should be urgently resolved. Our ministers will sign a memorandum of understanding for the construction

of a bridge across the Corentyne River. Once constructed, not if constructed, the bridge will serve as a permanent physical link between the people of Guyana, and Suriname. But more importantly, that link to the rest of the South American continent.”

He said too that important discussions were also advanced in areas where the neighbouring countries can jointly promote business and tourism opportunities.

In addition, President Ali noted that the proposed road alignment will also create within its vicinity, possibilities for free trade zone and enhanced land value, which will not only reduce the cost of doing business but improve the ease of doing business.

The Guyanese Head of State also pointed to the importance of collaboration in the wake of the COVID-19 Pandemic, to ensure that the protocols and guidelines are strengthened while the countries’ economies restart.

President Ali said that with enhanced synergy, both countries will be able to benefit from the burgeoning oil and gas sector.

“Yes, we are small countries, small population, small human resource base, small investment portfolio. But if we bring synergy to what we do, then we can have greater benefits, greater local content, and more resources flowing into the local economy.”

As such, he reaffirmed his Government’s commitment to the pursuit of the various bilateral initiatives agreed upon, thereby advancing the relationship between the two countries.

He also announced the establishment of a Guyana and Suriname business facilitation unit to manage and enable collaboration between the countries’ private sectors. The council, he explained, will also promote investment and business opportunities for agriculture, tourism and fisheries among other sectors.

“Both Guyana and Suriname recognised the importance of engaging the private sectors in our strategic plans for development.”

In outlining the commonalities between the neighbouring countries, President Ali pointed to shared opportunities ahead.

“This is what will lead to a lasting sustainable relationship that will ultimately benefit the people of our country. A relationship based on mutual respect, shared values, development focused, people focused. A Focus on integration and regionalisation of our people in an open and transparent manner … whilst recognising our individuality, based on trust and joint action. This is what we are achieving together.”

President Ali highlighted the importance of focusing the collective energies in a positive direction which will ultimately benefit the citizens of both countries.

He stated that tomorrow (November 25) the two countries will celebrate 45 years of diplomatic relationships and that the meetings were testament to the path that the leaders want to forge.

“Once again, to President Santokhi and the people of Suriname, we thank you graciously for hosting us, and we look forward to welcoming you again.”

In his statement to the press, President Santokhi acknowledged the importance of the “fruitful meetings” which were used to address areas of development and common interest which he said binds the two countries.

He also pointed to the importance of critical areas discussed, including the hosting of the first meeting of the Strategic Dialogue Cooperation Platform.

“This is the materialisation of our aspirations to energise the collaboration between our two countries and to personally give direction to the cooperation between Suriname and Guyana.”

Other areas of discussion included the establishment of a joint investment committee.

President Santokhi noted too that President Ali’s first visit abroad reflects the strategic bond and friendship between the two nations.

“It is of the utmost importance as small border nations to maintain good neighbourliness, to join efforts and to form strategic alliances.”

Guyana and Suriname moving ahead with developmental agenda