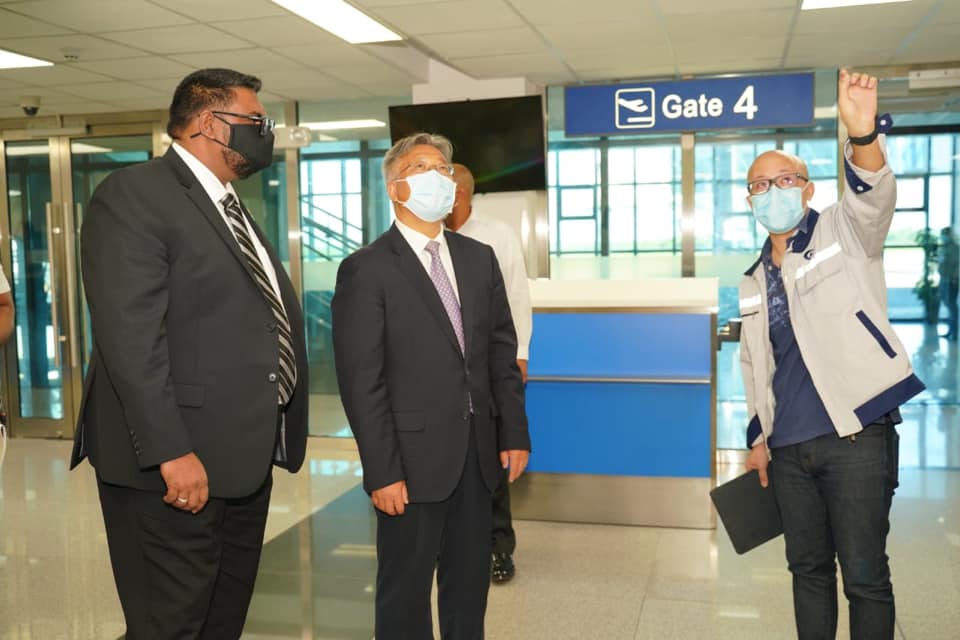 Georgetown, Guyana – (September 21, 2020) His Excellency, President Irfaan Ali has made it emphatically clear that the Government of Guyana will only accept the CJIA Expansion works, as it was outlined in the original contract. The Head of State made this assertion during a meeting with the Chinese Ambassador, Cui Jianchun and representatives of China Harbour Engineering Company (CHEC), the Project Consultant and the Project Manager, which was held at the CJIA this afternoon.

“I am holding everyone responsible; the contractor, the consultant, the project management team…this is not acceptable for the Guyanese people. In this current position it is very clear from all that I have seen and heard, and from all the questions asked, it is very clear that something is horribly wrong. The right decision at this moment is that we cannot accept this, “President Ali stated, following an update from the Project Manager of the CJIA Expansion Project, Ms. Carissa Gooding.

During the presentation, Gooding along with the project consultant failed to answer key inquiries as posed by the Head of State, which included the outline of the original contract, and the details of the revised scope of works and costs attached.

“We need answers as we have decisions to make,” President Ali stated.

The representative of CHEC also informed the Head of State that after the contract was signed; there were other works which needed to be done following an assessment.

The Head of State enquired as to who made the decision to pay the contractor for delays, and was informed that this decision was made under the former Government.

He said, “This tells a damning story… there are more questions than answers from this presentation.”

The original contract would have seen the completion of 17,000 square feet of work, but currently there is only an existing 6,000 square feet – a difference of 11,000 square feet. In addition, key aspects of the project were either omitted or poorly completed.

President Ali said that an investigation is likely to be launched into the entire airport expansion project. He also pointed to the importance of a joint approach to the realisation of the project. He maintained that the works completed do not reflect the monies spent.

Meanwhile, the Chinese Ambassador, Cui Jianchun, agreed that the provisions in the original contract have to be honoured. He pointed to the importance of the meeting and pledged that he will play his part to ensure that the project is completed.

Following the project update presentation, the Head of State along with the representatives from the Cheddi Jagan International Airport and the China Harbour Engineering Company (CHEC) toured the facility to inspect several areas including the departure area and an air bridge.

As part of the original contract, the CHEC was expected to tear down the existing terminal building, and construct a new one which could accommodate eight air bridges. But what the contract actually did was facilitate the refurbishing of the terminal building and installation of only four air bridges. There are also a myriad of other issues plaguing the facility including a malfunctioning sewerage system.

Statement on behalf of the Chairman of the Group of 77 and China by H.E. Dr Mohamed Irfaan Ali, President of the Cooperative Republic of Guyana on the occasion of the 75th Anniversary of the United Nations