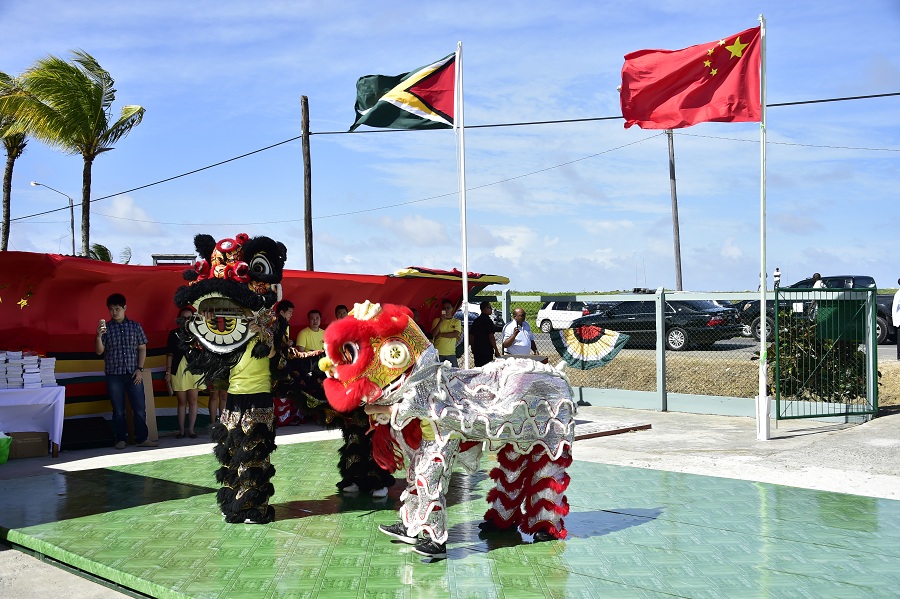 Georgetown, Guyana – (January 12, 2018) President David Granger said that continuous immigration of Chinese to Guyana attests to the excellent relations between the two countries and pledged that his Government will continue to work with this major international partner to advance a common vision of increased investment, infrastructural development, integration, international trade and the development of information communications technology. The Head of State made these remarks at a ceremony to commemorate the 165th Anniversary of the Arrival of Chinese Indentured Immigrants to Guyana.

The event, which was organised by the Government in collaboration with the Chinese Association of Guyana, was held at the Windsor Forest Primary School, West Coast Demerara, where a monument has been erected in honour of the first set of Chinese immigrants who arrived in Guyana on January 12, 1853.

“Chinese are still arriving today, not as labourers but as investors, visitors, workers, as entrepreneurs…They are welcome again as they were welcomed in 1853… Chinese entrepreneurs are extending their influence and expanding their involvement in the commercial, construction, hospitality and mining sectors. They are continuing to contribute to Guyana’s growth,” the President said.

He noted too that the intensification of cooperation between Guyana and China, particularly in the areas of defence, education, economic development, health, infrastructural development and security, promotes mutual benefits for both Guyana and China. This, he said, is a fitting tribute to Chinese ancestors on this 165th anniversary of their arrival.

Over the years, the strong, comprehensive programme of bilateral cooperation has resulted in Guyana benefitting from the services of the Chinese medical doctors and technicians, the donation of equipment to the health sector, the educational work of the Confucius Institute, the support given to the Bertram Collins College of the Public Service, the donation of scientific equipment to the tune of $50M to the Cyril Potter College of Education, infrastructural support for the expansion and renovation of the Cheddi Jagan International Airport (CJIA), the widening of the East Coast Demerara Public Road and the donation of vehicles and other equipment to the Guyana Police Force and the Guyana Defence Force.

“The Cooperative Republic of Guyana and People’s Republic of China will continue to advance our common vision of increased investment, of infrastructural development, of integration, of international trade and information communications technology…Chinese indentured immigrants undertook the arduous 15,000 km journey from China to Guyana one hundred and sixty-five years ago. These early immigrants and those who followed forged the unbreakable bonds of blood, which continue to bind our two peoples and our two republics…I am proud of the relationship which we have preserved between the two countries,” President Granger said.

Minister of Social Cohesion with responsibility for Culture, Youth and Sport, Dr. George Norton, in remarks, said that he is committed to ensuring that no effort is spared to continuously integrate the Chinese community into the social cohesion and development process of Guyana as a matter of policy. He noted too, that now that youth and sport are under the remit of the Social Cohesion Ministry, he will be working with the Chinese Embassy and the Chinese Association of Guyana to explore possibilities for sporting initiatives.

“Chinese input to Guyana’s development cannot be underestimated…today marks the first celebration of this nature of Chinese Arrival Day in Guyana’s history but it is certainly not the last. I will ensure that this day remains a prominent feature on the calendar of national events in this country,” Dr. Norton said.

Meanwhile, Chargé d’ Affaires at the Chinese Embassy in Guyana, Mr. Chen Xilai said that the Chinese community is deeply appreciative of the designation of January 12 as Chinese Arrival Day by President Granger. This, he said, is a demonstration of the Government and the wider Guyanese society’s respect and recognition of the contributions that people of Chinese origin have made to Guyana. “It also demonstrates the great importance that Guyana holds towards sustaining cordial relations with China…The preservation of the inherent Chinese traditional culture has assisted in enhancing the richness and diversity already present in the Guyanese culture. The Chinese living in Guyana treat this nation as their second home,” he said.

After the ceremony, members of the Chinese Association of Guyana donated a quantity of items to the Windsor Forest Primary School including books, stationery, cleaning supplies and sporting equipment.

Chinese indentured immigrants arrived in British Guiana, aboard the ship Glentanner, on January 12, 1853. The first 262 were joined, five days later, by an additional 85 indentured immigrants who disembarked from another ship, the Lord Elgin. Unfortunately, more than half of the passengers who were onboard the Lord Elgin died from sulphurated hydrogen poisoning while en route to Demerara. A third ship arrived two months later with another 300 immigrants.