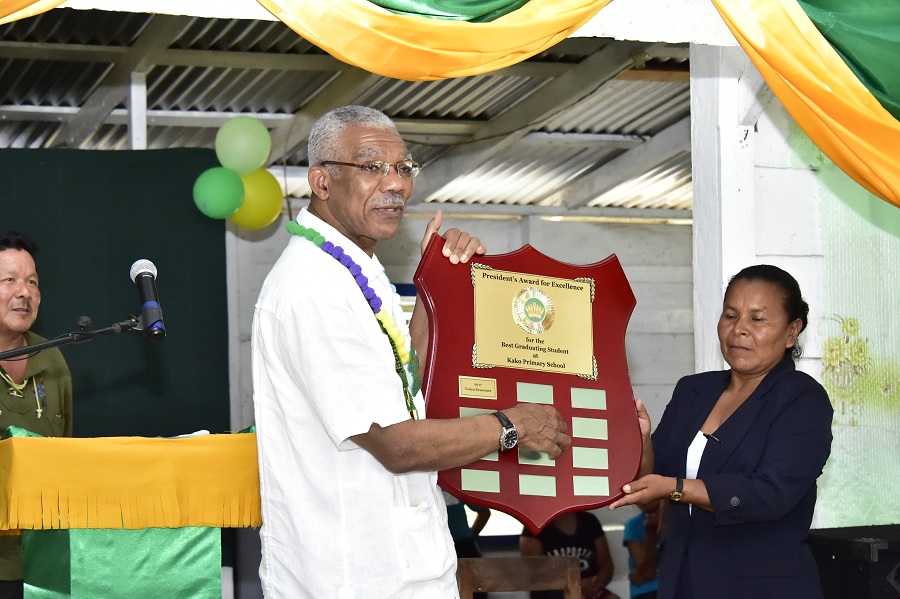 Georgetown, Guyana – (November 23, 2017) President David Granger said that education is gateway to equality, which will pave the way for employment and empowerment. Speaking during a visit to Kako Village in Cuyuni-Mazaruni today, he said that it is for this reason that his Administration has been placing so much emphasis on boosting teachers’ capacity and enhancing education delivery and access through increased budgetary allocations and the introduction of innovative programmes such as the Buses, Boats, Bicycles + Book and Breakfast (Five Bs) initiative.

The Head of State visited the Village to join the residents and students in celebrating the 29th anniversary of the Kako Primary School, where he told them that as President of Guyana, he is a partner in the development of their village and the country as a whole.

In this regard, he urged the Toshao, village councillors, members of the regional authority and residents to inform the Government of any impediments to access to education so that urgent steps can be taken to remove them. “If there is anything keeping child from school let us know and we will try to solve that problem,” he said.

President Granger spoke of the importance of education in securing meaningful employment, noting that in this age of technology, people must advance their skills so that they can not only be employable for also be able to create employment for themselves and for others. Technology, he said, can help them to venture into agro-processing, whereby they can process their ground provisions, fruits and vegetables and seek competitive markets in and out of the country rather than having to take their raw produce out of the village to sell risk spoilage and such disadvantages. The President said this is why the Government is working to ensure that communities like Kako get reliable energy supply, which is vital if residents are to move in the direction of agro-processing.

Kako Village is a beautifully maintained community, with well-manicured lawns and green spaces, testament to the care villagers take in their surroundings. In fact, President Granger dubbed Kako ‘the green village’. He reminded residents, particularly the children, of the importance of the environment and the need to ensure that it is sustainably managed. “I want children to learn to protect the environment…each one of us has a duty,” he said.

The Head of State also urged the residents to ensure that they stay informed on what is happening in their country and what programmes and projects are being undertaken for their benefit. “We want you to be educated and empowered. You must be able to exercise your rights as citizens by being fully informed,” he said.

Meanwhile, Minister of Public Affairs, Ms. Dawn Hastings-Williams who is a proud product of Kako Village and also attended the Kako Primary School, urged the children to keep studying and to ensure that they attend school regularly, noting that the institution continues to churn out individuals, who went on to excel in their various fields such as head teachers and health workers, who have not only served Kako but other hinterland communities.

At today’s event, the President presented the Head Teacher, Ms. Stephanie Krammer-George with a Presidential Awards Shield on which the names of the school’s top students each year will be engraved. He also handed over a laptop computer to the school. Meanwhile, the school’s top National Grade Six Assessment (NGSA) students for 2017, Ms. Tonya Krammer received the President’s Award for Excellence, which includes a shield, a laptop computer and a certificate. As a fierce advocate for the environment, the President was happy to award Mr. Romario Hastings with a laptop computer for completing a Bachelor’s Degree in Environmental Science from the University of Guyana.

The President and Minister Hastings-Williams handed over a quantity of equipment to the village including a music system and sports gear and with the Christmas season fast approaching, they also distributed toys to the children of Kako.

Regional Chairman of Region Seven, Mr. Gordon Bradford and several regional officials were also in attendance at today’s event, which culminated with the cutting of the ribbon to officially commission a new dining hall for the students of the school.