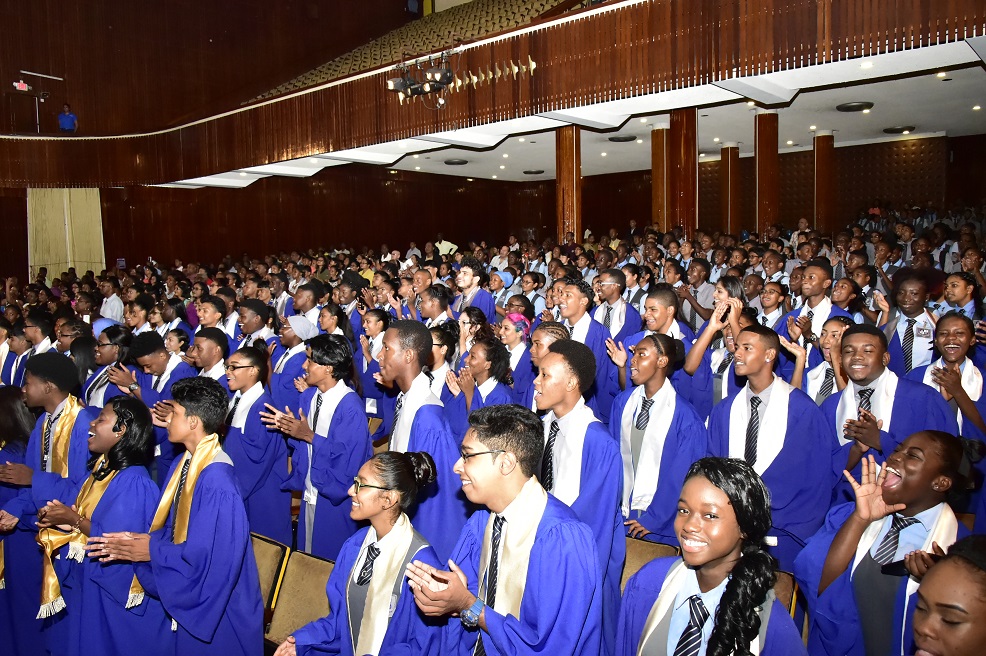 Georgetown, Guyana – (November 17, 2017) As Guyana embarks on a ‘green’ development trajectory with an emerging oil and gas industry, President David Granger, today, told the graduates of the St. Stanislaus College that Guyana needs their skills, expertise and knowledge, particularly in the areas of Science, Technology, Engineering and Mathematics (STEM), to develop and become one of the most prosperous countries in this hemisphere.

Delivering his address to the students, parents and teachers at the graduation ceremony held at the National Cultural Centre (NCC), President Granger said that the St. Stanislaus College, though having a broad-based curriculum, has been building a reputation for Science. He noted that while the College’s early administrator, from 1928, established laboratories and encouraged instruction in Science; it has enjoyed a solid performance in the Science and Technology subjects at the Caribbean Secondary Examinations Certificate (CSEC) and Caribbean Advanced Proficiency Examinations (CAPE) assessments in recent years.

The Class of 2017, he said, can contribute much to this country’s development. “Cohorts of youth, like this class, can convert our country’s resources into riches, our promises into performance and our potential into production. The Class of 2017 will inherit the biggest, most beautiful and bountiful country in the Caribbean Community – the ‘green state’ – that is rich in natural resources and the habitat of some of rarest flora and fauna on earth. The ‘green state’ is one that will preserve its biodiversity, protect its environment and promote renewable energy use. The Class of 2017 can combine its human capital with the country’s natural capital to drive the development of the ‘green state’,” the Head of State said.

President Granger, who in addition to the ‘Boats, Buses, Bicycles plus Breakfast and Books’ or Five B’s programme, has established the National Endowment for Science and Technology (NEST) aimed at boosting the Science and Technology laboratories in schools, said that as the country develops, there will be a greater need for specialists.

“The country needs biologists, botanists and zoologists to document and study its rich biodiversity; engineers to erect infrastructure in its hinterland and to install hydroelectric, wind, solar and biomass energy plants and Information and Communication technologists to extend communications services; geologists and gemmologists to provide services for the sustainable management of our extractive sectors and agriculturists, chemists, physicists and physicians to promote food security and enhance human health and well-being,” he said.

St. Stanislaus College was selected as one of thirteen high schools, which benefitted from presidential grants of one million dollars each to improve their Science and Technology laboratories under the NEST initiative. This endowment, he said, is not a fluke or gimmick but it is his commitment, which is aimed at ensuring that the skill sets needed to develop the country are honed and encouraged.

“I told your principals, last June, that Science is not a sideshow. It is essential to our country’s development. I have been actively promoting Science, Technology, Engineering and Mathematics (STEM) education and I encourage schools, students and teachers to pay more attention to the STEM subjects, which will help young people to become innovative and equip them with the skills to contribute to the country’s development. I said then, “We need the arts and humanities but we also need Science and Technology and… [all] I ask is that we give a special encouragement to children who are gifted in Science and Technology; we shall give special facilities to schools and provide the resources for children to enter the field of Science and technology”,” the President said.

Meanwhile, in his charge to the students, the President urged them to remain faithful to the College’s longstanding principles, values and standards, even as he noted that St. Stanislaus College has been a provider of quality education for more than 150 years. The institution continues to maintain its proud traditions, values and standards and has been one of the pillars of educational excellence, he said.

“Tradition cannot be contrived. Tradition sustains the College’s standards – the authoritative bases that define how students behave and how that behaviour is measured especially standards of scholarship transmitted over the past century. Tradition embodies the College’s values – the important moral principles and qualities that shape the students’ character and promote camaraderie and esprit de corps. Tradition reflects the College’s intellectual origins. Its Polish logo of crosses and horseshoes and its Latin motto – ‘Aeterna non caduca’ – which translates, roughly as: ‘for the eternal, not the ephemeral,’ tell a tale of both the past and future,” he said.

Meanwhile, Headmistress of the institution, Ms. Paulette Merell, in her remarks, said that she is proud of the school’s performance at the recently sitting of the CSEC and CAPE assessments. She informed that the school recorded a 92 percent overall pass rate. Moreover, the class of 2017 attained an impressive 95 percent pass rate in Mathematics and English.

Mr. Ishwadat Boodramlall graduated as the Valedictorian with 13 subjects; 12 ones and one Grade Two and received the President’s Prize, which includes a laptop, a plaque, a certificate and a gift voucher of $20,000.

The ‘College’ was established as a Catholic grammar school for boys on May 1, 1866 by the Society of Jesus (Jesuits), a Roman Catholic religious order with a long and strong tradition in education. The College’s headmasters, between 1866 and 1980, save for a short period between 1869 and 1872, were all Roman Catholic priests who inculcated in students the values and standards of academic excellence.

Message of Condolence by His Excellency, Brigadier David Granger, President of the Cooperative Republic of Guyana on the passing of Ms. Sandra Valerie Jones, AA