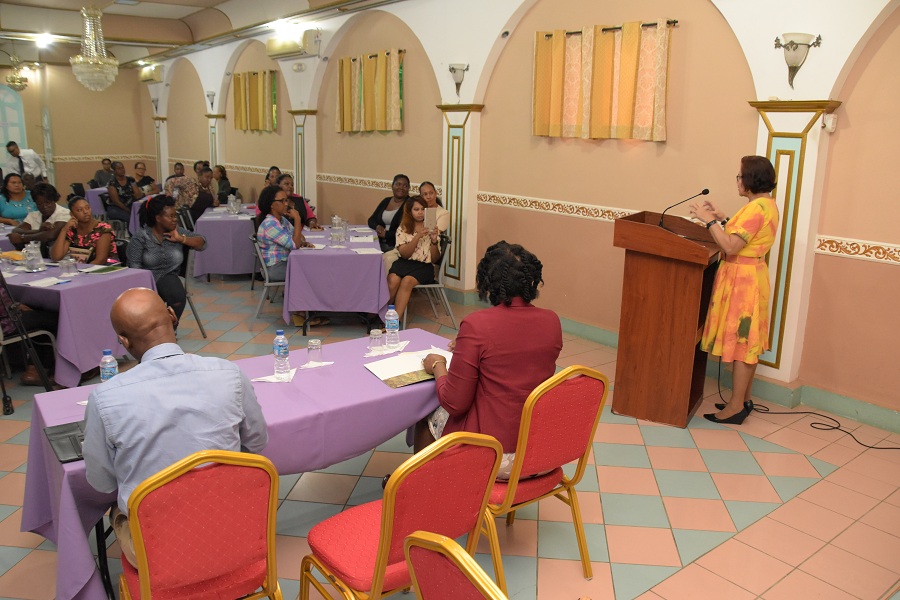 Georgetown, Guyana – (November 06, 2017) First Lady, Mrs. Sandra Granger, this morning, launched the first Training of Trainers workshop for 33 selected graduates of the Self-Reliance and Success in Business Workshop, who will now be certified to facilitate such sessions countrywide. This is aimed at scaling up the reach of the successful programme, which has seen more than 790 small business owners and prospective entrepreneurs benefitting from its empowerment curriculum. The opening ceremony was held at the Regency Suites in Georgetown.

Mrs. Granger noted that the programme, which is mainly aimed at women, but has attracted the participation of some men, is designed to empower communities. “We felt it was necessary to have the Training of Trainers workshop because you are really in the communities… If your peers…know that you have additional training you should be able to help and give guidance when they encounter some problems while they…set up and manage their businesses. The main focus of this exercise is to put the power in the communities,” she said.

The First Lady also encouraged the participants to invest themselves fully into the programme. “I want to ask you to pay close attention to what you are being taught and instructed in during this week. Be present… participate, learn, [and] ask questions… I’m hoping that you can come together, have your minds meet, and, to quote Sir Shridath Ramphal… ‘let all ideas contend’,” she said.

First Lady, Mrs. Sandra Granger gives brief remarks to the participants of the First Training of Trainers Self-Reliance and Success in Business Workshop, held at the Regency Suites in Georgetown.

Senior Facilitator at Interweave Solutions (Guyana) Incorporated, Mr. Wayne Barrow told the participants that the programme is a long term investment. “We are so happy to be part and parcel of this project. This is a lifelong project… We will train you as Interweave Ambassadors… You will have a great knowledge of the materials that will be presented,” he said.

Mr. Barrow urged the participants to avoid lecturing excessively, during their future workshops, and to, instead, create an environment for open interaction and brainstorming. “We [Mr. Barrow, Lead Facilitator, Mr. Sanjay Pooran, and Assistant Facilitator, Ms. Cyrstal Baptiste] were trained similarly… We use the word [facilitator] because you are guiding people to extract the best ideas from them… It’s not about you. It’s not [solely] about your knowledge. It’s about you getting the best out of every team… that will present themselves before you,” he said.

Supply, East Bank Demerara resident and owner of Jones’ Fresh and Organic Vegetables, Ms. Jenelle Jones, who had attended the Timehri North Self-Reliance Workshop, said that she was able to take small steps to expand her business following the workshop. “[The workshop] helped [us] to manage and at least plan how to go about everything very easily and without the rush. We were studying [that we] have to get this big [amount] of money to start, but the workshop [taught us] that we can start [with] very little [steps],” she said.

The Training of Trainers programme, which is funded by the Ministry of Social Protection, will train a total of 66 women, during two, one-week-long, sessions.