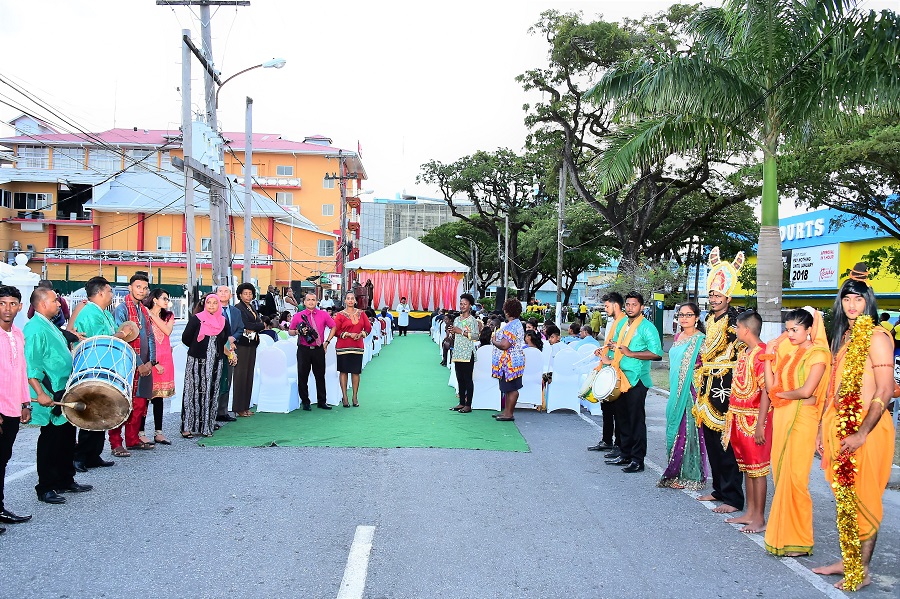 Georgetown, Guyana – (October 17, 2017) President David Granger has charged the Ministry of Communities to encourage the 10 Regional Administrations to work with the Hindu community and other social organisations to host important cultural and religious observances such as Diwali. This, he said, has the potential to break down barriers in communities and promote greater social cohesion and a better understanding and appreciation of various festivals. The Head of State made these remarks, this evening, at the Ministry of Social Cohesion’s Diwali celebrations, which was held on Main Street in front of the Department of Culture, Youth and Sport.

“I pray that the significance of this festival will not be lost and the significance of the light of the diya (lamp) would not be lost on the Guyanese community and that it could show us the path so that we can be guided to a more tolerant, a more cohesive society just as Ram and Sita were guided by the light of the diya to the Kingdom of Ayodhya in the North (India),” he said.

The President pointed out that even though Diwali was brought to Guyana by the Hindus some 179 years ago, it was only in the last 50 years that it became a national holiday. This, he said, is one of the most integrative features of the country’s post-Independence experience whereby people learn to accept each other’s ‘otherness’ without trying to smother one another with a particular religion.

Meanwhile, Minister of Social Cohesion, Dr. George Norton said that he is happy that a wide cross-section of Guyanese united to celebrate this important festival, not just Hindus. “Religious festivals such as these not only help us to preserve our cultural heritage, but are also vehicles for fostering social cohesion in our multi-ethnic, multi-cultural society. Diwali presents the opportunity for all Guyanese to commit to working together with a greater understanding of each other so that we can build a Guyana which is recognised worldwide as unified country,” he said.

The event was attended by several Cabinet members, members of the Diplomatic community and Guyanese from all walks of life, most of whom stopped to take in the scenes as they were walking down Main Street.

Remarks by His Excellency David Granger, President of the Cooperative Republic of Guyana, at the National Tree Planting Day held at Hosororo Village Barima-Waini (Region One) October 8, 2017