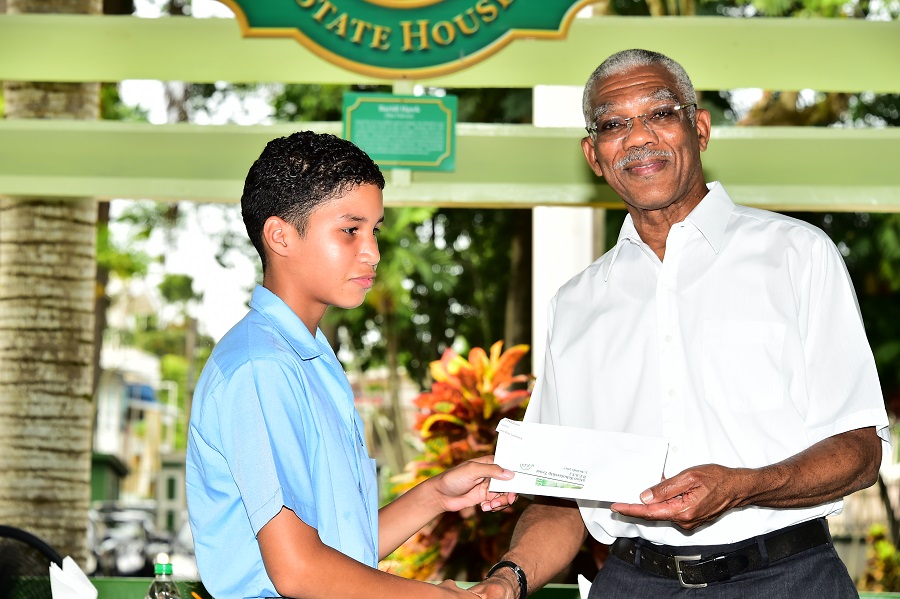 Georgetown, Guyana – (October 12, 2017) President David Granger, today, announced that the Burnham Education Scholarship Trust (BEST) has extended its mandate from ensuring just access to secondary education to support, as far as funding allows, to tertiary education. He made these remarks at the sixth Annual BEST Bursary Awards ceremony, where two students from the 2012 batch of awardees received cheques to cover the cost of their first year of tuition at the University of Guyana (UG) and book vouchers totaling $50,000 each. The other awardees received their $30,000 book vouchers as well as $10,000 each in honour of the 60th Anniversary of the People’s National Congress Reform (PNCR).

Speaking to awardees at the event, which was hosted at the Baridi Benab at State House to allow the students to visit the official residence as has been allowed for hundreds of students across the country since 2015, President Granger said, “We reward success and as long as you continue to perform well, you will continue to get assistance… If we can help you to get through the University of Guyana we will be doing a great deal of good for this Republic,” he said.

The Head of State lauded the Board of Directors of BEST, noting that they have been very effective in ensuring that this initiative remains an innovative scheme by examining ways and means of keeping abreast with the changing needs and demands of the education sector in Guyana. He also spoke of the Chetwyn Learning Centre, which aims at ensuring that beneficiaries of BEST have access to Information Communication Technology (ICT).

“BEST is not a passive scheme that remains the same year after year. Innovation is essential to economic development. Innovation is the watchword of the BEST,” the President said.

He also urged the awardees to continue to strive for excellence, pointing out that the programme has already resulted in tremendous academic success. This year, one of the awardees, Mr. Nicholas Headley of Pomeroon-Supenaam (Region Two) placed in the country’s top 10 at the Caribbean Secondary Education Certificate (CSEC) examinations with 15 Grade Ones and Two Grade Twos. The other eight students of the batch also performed creditably.

Meanwhile, Chairman of BEST, Mr. Allan Munroe said that President Granger, who is the patron of the Trust, has always demonstrated an interest in and concern for education, recognising its important role in national development. “Every cent of hard-earned money spent on education is a wise investment in the future,” he said. He added that BEST helps students to inculcate skills, values and attitudes, which will enable them to serve and develop the country.

Trustee Member, Ms. Yvonne Harewood-Benn said that one of the major objectives of BEST is to encourage excellence in education and to assist young people to serve their country. “Think of your country. All along the line education is been the key focus. It is the engine of growth and development. It makes for upward mobility in most societies,” she said.

The BEST is a non-governmental, non-profit organisation, established to support educationally talented children of members of the PNCR from the 10 Administrative Regions. The Trust is managed by a Board of Trustees, which is responsible for the yearly selection of awardees. Selection is based on the results of the National Grade Six Assessment (NGSA). The awards are in the form of book vouchers worth $30,000 each. However, at the discretion of the Board, additional funds can made available when necessary for meals, transportation and uniforms.

US$1.5 M secured for completion of Green State Development Strategy