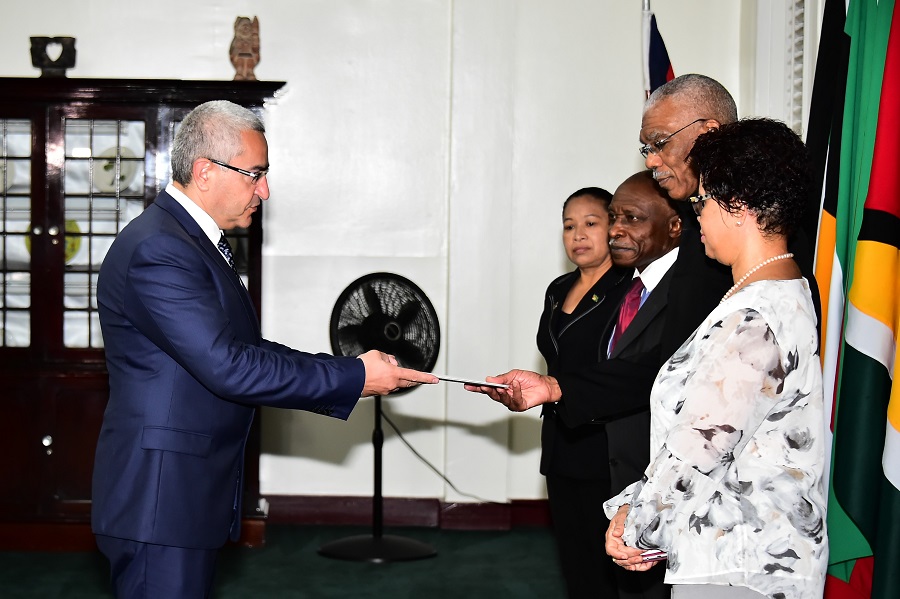 Georgetown, Guyana – (October 4, 2017) President David Granger expressed his Government’s willingness to explore deeper cooperation with its bilateral partners, particularly in the areas of e-governance, electronic services, oil and gas and renewable energy generation, agriculture, culture, education, environmental protection, forest management, information technology, investment, public health and various other fields of economic enterprise. The Head of State made these remarks, earlier today, when he accredited two new Ambassadors to Guyana, Mr. Elkhan Polukhov from the Republic of Azerbaijan and Ms. Marianne Feldmann of the Republic of Austria.

While accepting Ambassador Feldmann’s Letters of Credence, President Granger said that the relationship between Guyana and Austria have been cemented by their active engagement in the the Caribbean Forum and the European Union (CARIFORUM-EU) and the Community of Latin American and Caribbean States-European Union (CELAC-EU) mechanisms. Guyana and Austria established diplomatic relations in April 1973.

“These engagements have facilitated our collective pursuit of programmes of cooperation and the advancement of our mutual interests. A solid foundation has been established for the intensification of cooperation between Guyana and Austria…. Guyana commends Austria for the importance it attaches to collaboration with the Caribbean sub-region through the Memorandum of Understanding between the Austrian Federal Government and the Caribbean Community,” the President said.

The Head of State also took the opportunity to commend Austria for the support that has been rendered to the Caribbean Disaster Emergency Management Agency (CDEMA) in the aftermath of recent hurricanes through the Austrian Development Agency. He said the assistance provided is invaluable in responding to the increasing incidence and intensity of natural hazards.

Meanwhile, Ambassador Feldmann said that while bilateral trade between the two countries is of a very small scale, there is massive potential for growth, particularly in the area of clean energy. “Austria has been the catalyst for the Caribbean Centre for Renewable Energy and Energy Efficiency, which is being created together with UNIDO [United Nations Industrial Development Organisation] and which will be headquartered in Barbados,” she said.

She also informed that Austria will be signing a Memorandum of Understanding (MoU), which will pave the way for Austria to send an expert on clean energy to the Caribbean, who will be of service to all countries in the Region.

Guyana and Azerbaijan have enjoyed cordial bilateral relations since September 1995 and President Granger told Ambassador Polukhov that the commonality of interests between the two countries is manifest in their shared membership of the Non-Aligned Movement and Organisation of Islamic Cooperation.

He also informed the Ambassador of Guyana’s ‘green’ development trajectory, which places emphasis on the protection of the environment, the preservation of biodiversity, the provision of eco-tourism and eco-educational services and the promotion of practical measures to ensure climate adaptation. “Guyana will place an additional two million hectares of its territory under conservation. We are committed to a low-carbon, low-emission trajectory of development. Guyana looks forward to your appointment becoming a catalyst to strengthen relations between our two countries,” he said.

Ambassador Polukhov assured the President that he will, during his tour of duty, explore fully, the opportunities for bilateral and multilateral cooperation between the two states. “I will use all my energies to expand the relationship between our countries and deepen mutual cooperation in the fields of our interests,” he said.