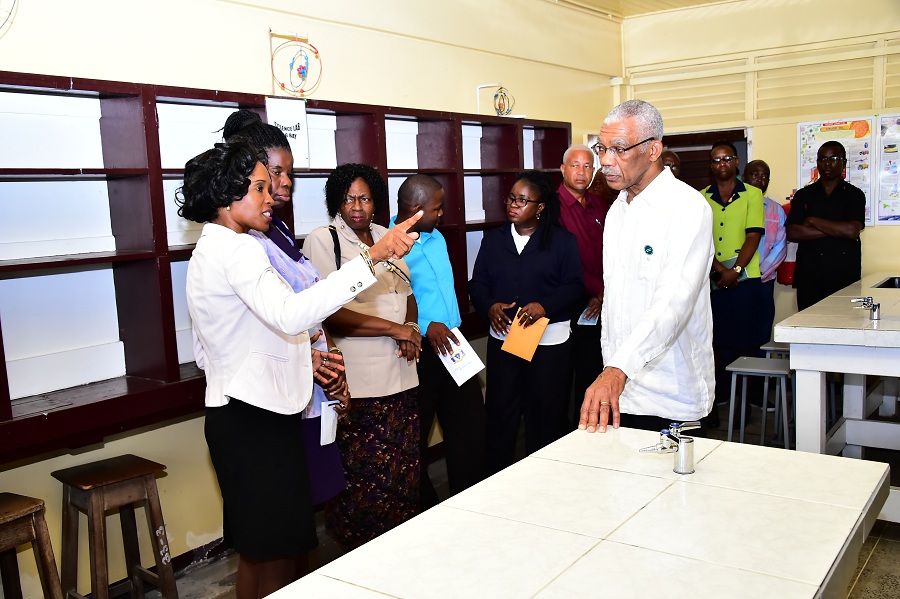 Georgetown, Guyana – (September 14, 2017) President David Granger, today, charged the students of President’s College to cultivate a strong sense of discipline during their school years. At the school, which he called the “youngest Princess among the Queens” because it is the youngest leading premiere school in Guyana, he told the students that if they do not attain discipline during their time at the institution they can potentially ruin the ensuing phases of their lives. “If within the six or seven year period you do not develop this discipline and you do not adopt a certain code of conduct you can damage the rest of your life so this is an important part of your life,” the President said. He made these remarks at the school’s 32nd anniversary celebration.

The President also alluded to the many ways that the students can gain discipline, noting that it does not necessarily come by way of punishment from teachers, but it can be developed through their friendships. “Discipline does not have to be enforced by the teachers…; discipline can come from peers, your equals. Sometimes if you take a look at the other students in the class, you can come to realise that your behaviour or conduct is out of order. So discipline does not have to be imposed by harsh punishment from your teachers but it can come from yourself and your peers and of course your home,” the Head of State explained.

He told the students that though his Government is very committed to assisting in maintaining the high standards of the school, students too must hold themselves accountable and he encouraged them to develop a sense of responsibility and respect for the institution which they are attending and the facilities and equipment that are at their disposal such as the dormitories, the library, the sporting equipment and the laboratories. The President reminded that there is a significant cost attached to keeping one student at President’s College compared to other secondary schools in the region.

Speaking of his desire for students to become more technologically-inclined, the President said that through initiatives such as Science, Technology, Engineering and Mathematics (STEM) and the National Endowment for Science and Technology (NEST) programmes, the Government will continue to ensure that students at the College are provided with the necessary opportunities which will generate greater interest in the sciences. In June, the school received $1M under the NEST programme, which was spent on upgrading its science laboratory.

Principal of the school, Ms. Carlyn Canterbury, in her remarks, said that President’s College opened with a mission to provide a place for education, learning and research of the standard required of a secondary school and assured that they will strive to continue to do so. She noted too, that the school’s mission and vision is so defined that it captures what was relevant at the time of its establishment as well as what is relevant at present and what will be relevant in the future in terms of education. Ms. Canterbury also said that the school will work towards adding to its mission by striving to promote the advancement of business through business education.

After the remarks and a short cultural programme, the President participated in the ceremonial cake-cutting to officially mark the school’s 32nd anniversary. He subsequently took a tour of the school’s science laboratory where he spoke to teachers of the department and inspected some new equipment that was purchased.

Miss Vashti Rambarran, a fifth form student, said that during her years at the institution, she has seen tremendous dedication from both the teaching and non-teaching staff. She said that each year, the school has been improving and the results gained at the Caribbean Secondary Education Certificate (CSEC) examination is proof of that.

Master Enuck Allicock, a scholarship student from Upper Takutu-Upper Essequibo (Region Nine), said that President’s College is one of the best learning institutions that he has attended so far. He too spoke of the professionalism and dedication of the staff at the College.

President’s College, which is located in South Golden Grove, East Coast Demerara, was established on September 11, 1985. The school was founded by the late Executive President Linden Forbes Sampson Burnham. It first opened its doors to a student body of seventy-two students.