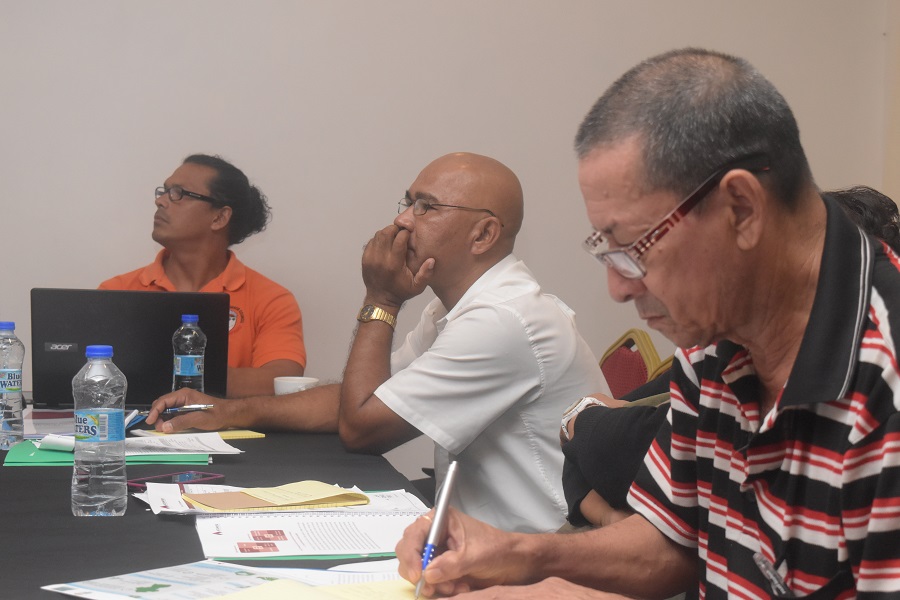 Georgetown, Guyana – (September 12, 2017) The Office of Climate Change (OCC), which falls under the purview of the Ministry of the Presidency, today, opened a three-day workshop at the Herdmanston Lodge, which will focus on building the capacity of community leaders and private and public sector stakeholders to apply and access funding from the Green Climate Fund (GCF) for projects which promote low emission and climate resilience development.

The Green Climate Fund was set up in 2010 at the 16th Conference of Parties in Cancun, Mexico and is now the world’s largest dedicated climate fund, which is intended to be the centerpiece of the global efforts to mobilise $100 billion per year in climate finance by 2020. As of March 2017, the GCF has raised the equivalent of US $10.3 billion in pledges. It has as its main goal, support to developing countries in achieving a paradigm shift towards a low emission and climate resilient development pathway by funding transformative projects and programmes on adaptation and mitigation to climate change.

Head of the OCC, Ms. Janelle Christian, in her remarks, said that for Guyana, the Ministry of the Presidency has been appointed to act as the GCF’s National Designated Authority (NDA). The NDA plays a crucial role in facilitating, supporting and creating an enabling environment for GCF processes within the country. She also noted that various barriers currently hinder Guyana’s NDA at effectively undertaking its fund-related responsibilities, including low levels of awareness and understanding among NDA personnel of the GCF operational policies and their respective roles and responsibilities in relation to Guyana’s engagement with the GCF.

Members of the Indigenous community at today’s presentation

“It is against this background that the Government of Guyana and the Caribbean Community Climate Change Centre (CCCCC) has received funding from the GCF and has commissioned to implement the project ‘GCF Readiness Preparation Support Project for the Enhancement of Guyana’s capacity to access and deliver international climate finance through targeted institutional strengthening’,” she said.

Ms. Christian said that the GCF will specifically support countries to implement their programmes as articulated in the National Determined Contributions, the National Adaptation Plans, the Technology Needs Assessment and all National Strategies and Plans that would have been elaborated by those countries for addressing their climate resilience and addressing the adaptation and mitigation priorities.

“Guyana started the engagement with the Green Climate Fund back in 2015 and we have been working since then with the CCCCC, which is a regional accredited entity to the GCF… It has a role to implement the ‘no objection’ procedure on funding proposals submitted to the Fund to ensure consistency of funding proposals with national climate plans and priorities and provide leadership on the deployment of readiness,” she said.

Participants have welcomed the workshop, noting that as Guyana continues to forge ahead in pursuit of a ‘green’ economy, training sessions such as these would be helpful for citizens and organisations to make their own contributions. Senior Economic and Financial Analyst at the Ministry of Finance, Dr. Valas Gobin, in an invited comment, said that he will be utilising his training and knowledge gained in his department to coordinate with other agencies, including public, private and non-governmental organisations, to guide them in the direction where they would be able to get a better understanding of accessing funds for the GCF.

“I am looking forward to the rest of the session where they will tell us how we will be accessing those funds. The Green Climate Fund is accessible to all agencies, both government and private, or at least that’s the model that they are working with so hopefully we can help to direct projects or advise agencies on how they can access these fund for specific projects that contribute to the country’s programme,” he said.