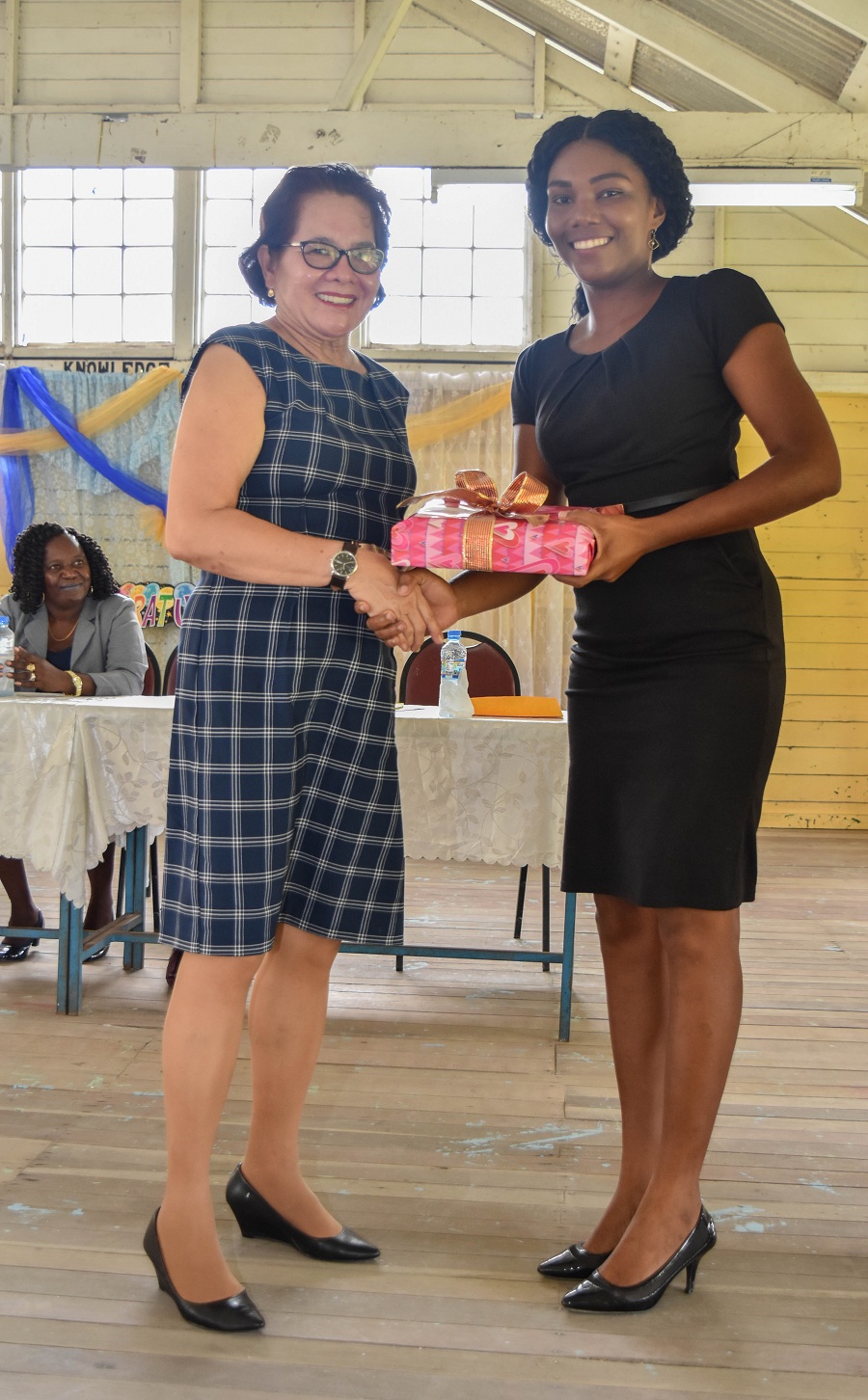 Georgetown, Guyana – (September 11, 2017) Twelve students, who have shown significant improvement in their academic performance over the past year, today, graduated from the 2016-2017 Lusignan Youth Development Initiative (LYDI) remedial programme, which is held under the auspices of the Office of the First Lady at the Lusignan Primary School, East Coast Demerara. The programme caters to low achieving Grades Two to Five students of the Lusignan Primary School and, based on the graduates improved test scores, has now been expanded to include tuition for Grade Six students, which will start from this afternoon.

First Lady, Mrs. Sandra Granger commended the teachers and the students for the commitment and discipline they displayed during the programme. “I want to thank the teachers and staff, who took up the challenge… because this arose from a concern about the number of children, who were struggling in school and we are happy to say that some of you have improved your performance and we look forward, over the years, for the children of Lusignan performing excellently when they get to the Grade Six exam,” Mrs. Granger said.

The programme, which had also been implemented in the Buxton/Friendship areas, was started in Lusignan on October 3, 2016 with 80 students, who were considered under-achievers. Of that number, about 70 attend the thrice-weekly classes regularly. Improved test scores were most significant among those students, who demonstrated a high level of commitment and had the support of their patents. This includes one student whose percentage rose from 40 percent to over 60 percent during the year.

The First Lady encouraged the students and their peers to remain focused on their studies. “I think that the children of Lusignan have the talent to do very well in education and I’m sure that with the help that you are receiving from the Teachers and Head Mistress and school, you will do very well as the years go by and as you graduate from one grade to the next,” she said.

Meanwhile, Coordinator of the LYDI, Ms. Nicola Halloway said the programme’s long-term goal is to raise its numeracy and literacy rates to 90 percent and to improve scores at the National Grades Four and Six Assessments. “The teachers, who are working with [the students] in the afternoon are not their class teachers. From the class teachers we would have seen some of them would have moved from unsatisfactory [scores] because they were below the 50 percent mark, to satisfactory and today is evident of that. Those that were honoured, recognised today would have shown some level of improvement,” she said.

Mr. Brentnol Halley, whose son Jamal, graduated as the Most Improved Grade Five pupil in the programme, praised the initiative and noted that he intended to enrol his son in the Grade Six class. He said that Jamal has improved in several subject areas. “I’m very grateful because I know that this programme helped my son Jamal a great lot since last year October. He was a slow learner and since the initiative he is doing well… in school. I want to thank the First Lady and the teachers at the Lusignan Primary School for this programme… I see a little improvement in Mathematics; I see improvement in his Writing, which has improved a great lot and I want to thank the teachers for putting their best foot forward to help my son,” he said.

Similar sentiments were expressed by Ms. Bibi Ebrahim, whose daughter Fareeza graduated in first place in the Grade Four programme. “This is a great programme. [She] has improved a lot in Maths and Social Studies,” she said. Ms. Ebrahim also said that she will enrol her daughter in the Grade Five remedial class.

The twelve students were each given gift vouchers, of varying sums, which can be redeemed for books and school supplies at Austin’s Book Services in Georgetown.

The First Lady’s remedial programme for primary school students compliments the measures that the Government and the Ministry of Education have embarked upon to improve the education outcomes of the nation’s students. In August, 33 children graduated from the Buxton Youth Development remedial programme, which caters for high and low achieving grades two to six pupils drawn from the Buxton, Company Road and Friendship Primary schools. This programme is hosted at the Friendship Primary School.