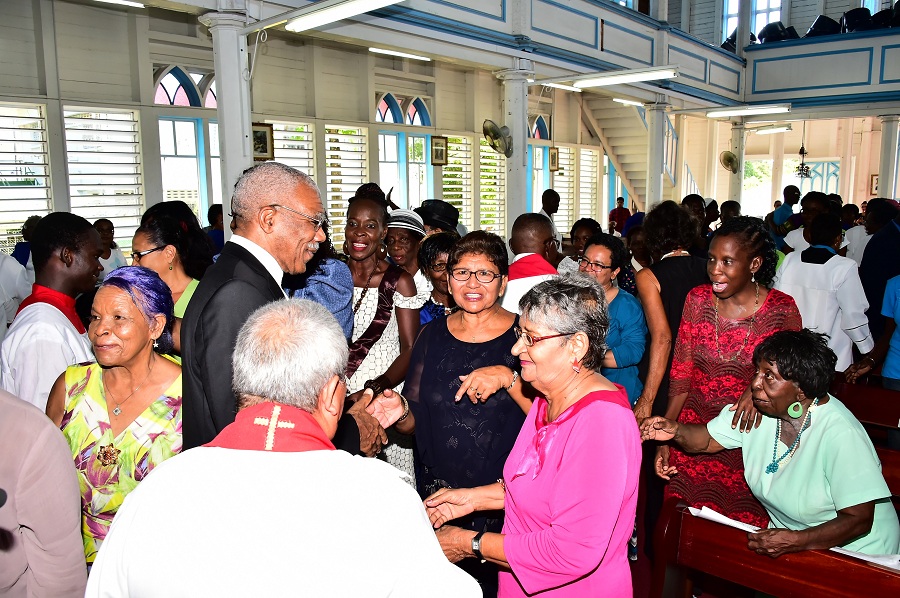 Georgetown, Guyana – (August 28, 2017) President David Granger, yesterday, pledged the Government’s support for ongoing educational programmes being implemented by the Diocese of Guyana even as he noted that religious organisations can play an integral role in the development of communities and by extension, the country. Therefore, the State looks to them for partnership in the eradication of poverty, the fostering of social cohesion and the creation of a better life for all Guyanese.

The President made these remarks at a special church service held at the Christ Church Parish on Waterloo Street to celebrate the 175th anniversary of the establishment of the Diocese of Guyana. He said that the Diocese has been making strides in education since its establishment and this coincides with his goal of improving access to education for all the children of Guyana. “The Diocese, through the foresight of our first Bishop, established Queen’s College as early as 1844 and, later, the correctly-named Bishop’s High School, both of which still reflect the high standards set by their Anglican founders. The Diocese can be assured of my Government’s support for the Church’s educational efforts, as I have supported Hindu and Islamic schools, through the National Endowment for Science and Technology (NEST),” he said.

President Granger said that the Diocese has always played a role in the promotion of peace, assisting the poor and impoverished and bringing people of different backgrounds together. “The Diocese came into existence on August 24, 1842 with the consecration of Right Reverend William Austin as the first Bishop of Guiana… The Diocese deserves our gratitude for its service to women, youth, the poor and needy. We applaud the episcopacy, clergy and laity for the propagation of the Gospel in Guyana… The State looks forward to working with the ‘Diocese’ towards making Guyana a better place and to providing a good life for all in the years ahead,” the President said.

The Head of State noted that the Diocese occupies a prominent place and plays a pivotal role in public and private life as he noted that Anglicans constitute almost seven percent of Guyana’s population. Anglicanism, he said, has transcended race, class and creed and has deep roots in almost all communities, with churches in every hinterland and coastland region, pioneering missions among Africans, Amerindians, Chinese and East Indians.

“Growing up in Essequibo, Berbice and Demerara, I never had to travel more than 30 minutes from my home to reach an Anglican Church, so ubiquitous were they then. The Diocese of Guyana is home to some of Guyana’s most historic churches – the most spectacular of which, the Cathedral of St George, adorns our $100 currency note. The Diocese has been the spiritual home of my own family for over a century. I was baptised here 72 years ago, confirmed, and married here 47 years ago and still worship here. My father, born 111 years ago, and my children worshipped here. My grandchildren were baptised here,” President Granger said.

Minister Norton to take up responsibility for Culture, Youth and Sport -Minister Henry confirmed as Minister of Education

Remarks by President David Granger at a fact-finding visit to the Kuru-Kuru Training Centre July 20, 2017