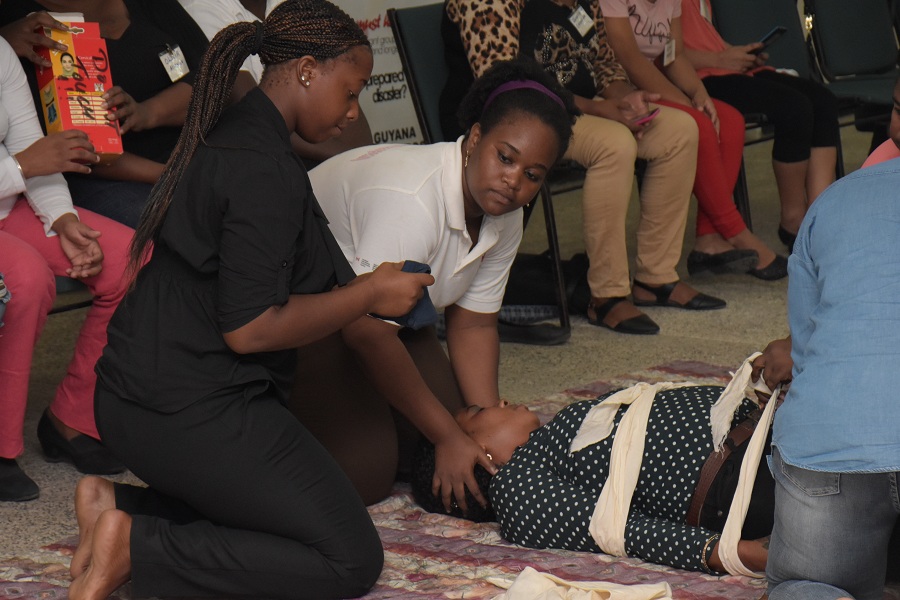 Georgetown, Guyana – (August 25, 2017) First Lady, Mrs. Sandra Granger, this afternoon, commended the 35 graduates of the five-day First Aid Cardiopulmonary Resuscitation (CPR) and the use of the Automated External Defibrillator (AED) training for persevering and completing the programme and equipping themselves with life-saving skills. Several of the graduates also pledged to become Guyana Red Cross Society (GRCS) volunteers at the closing ceremony, which was held at the GRCS’s Barrack Street, Kingston headquarters.

The First Lady was pleased that some of the graduates expressed an interest in becoming volunteers and noted that she is sure that their newly-acquired skills will serve them well. “You came together as a very diverse group, so you also had to learn how to work as a team and to respect and give way sometimes, where you might have felt that you were right or you were in a better position to do something; to understand that sometimes you have to think as a group to be able to succeed and this is something I think will come into play when you become volunteers of the Red Cross because nobody is going to be acting on their own at that time,” she said.

Under the guidance of Guyana Red Cross Society trainer Ms. Melisa Alstrom (second left) Ms. Mika Clarke (first, left) demonstrates how to fold a cap to be used to stabilise a casualty’s neck, when treating a suspected head and spinal casualty, at the closing ceremony of the First Aid component of the First Lady’s Care for the Elderly workshop.

General Secretary of the GRCS, Mrs. Dorothy Fraser also applauded the graduates for committing to becoming Red Cross volunteers. “Even when you leave here, practice your skill,” she said, adding that those who’ve agreed to become volunteers would soon have an opportunity to work in the field.

The participants were drawn from various organisations, including the Women Across Differences (WAD), the Buxton Day Care Centre and the Lusignan Learning Centre. Several of them expressed gratitude to the First Lady for sponsoring this workshop, which was a component of the ‘Care for the Elderly’ workshop. In an invited comment, Ms. Mika Clarke said, “I participated because I love caring for the elderly. I have an aunt at home that I wasn’t fully able to take care of her, but now I am fully aware and have the qualification to take care of her. I’m very happy and grateful and thankful to the First Lady. I am volunteering to do First Aid with Red Cross and from then onwards.”

Ms. Toshana Lovell, also in an invited comment, said that as a young mother she thought it was important to learn First Aid. “I participated in this workshop to be a better person because… I didn’t have any experience in child care so I participated in this course to be a better mother and to care for other persons. I have plans to come and register as a volunteer,” she said. Similar sentiments were expressed by Ms. Tajwattie Harrilall, who said, “I decided to participate because I wanted to have more experience caring for the elderly and taking care of people who are in need”.

The training is a collaborative effort between the Office of the First Lady and the Ministry of Social Protection. GRCS First Aid Coordinator, Mr. Devaughn Lewis, Trainer Ms. Melisa Alstom also attended the ceremony.