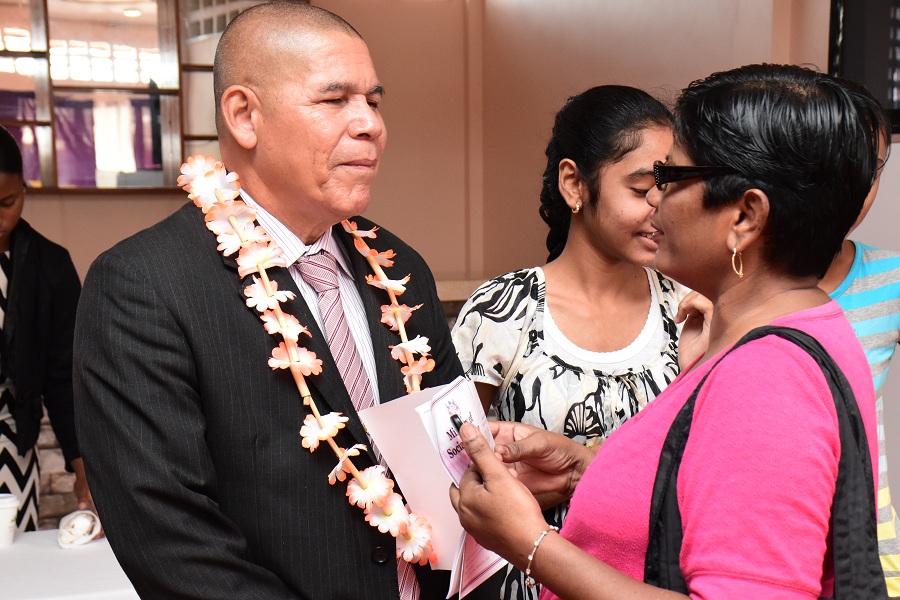 Georgetown, Guyana – (August 23, 2017) Minister of State, Mr. Joseph Harmon, today, charged Regional Democratic Council (RDC) councillors of Essequibo Islands-West Demerara (Region Three) to take up their roles as the drivers of the social cohesion process in the region, at the Ministry of Social Cohesion’s Sensitisation Workshop for councillors and other key stakeholders. One hundred and fifty-six stakeholders, including representatives from the Neighbourhood Democratic Councils (NDC), representatives of the Guyana Police Force, Ministries of Communities, Education and Health, organisations and groups such as the Den Amstel Dynamic Network, the Central Islamic Organisation of Guyana, the Hindu Swayamsevak Sangh (Hindus for Selfless Service), Youths with a Purpose, the Zeelugt Sports Club and others attended the workshop, which was held at the Barnwell Hotel, Barnwell, West Coast Demerara.

Minister Harmon said that social cohesion is enshrined in the Guyana Constitution and the Government is obligated to ensure inclusiveness, solidarity and the diversity of our people and to harness their energies towards building a unified nation. The RDC, he said, has a vital role to play in this endeavour as they are the organs of change which must advance this approach to unity in the region.

Minister of Social Cohesion, Dr. George Norton interacts with this stakeholder before the opening of the Sensitisation Workshop for Regional Democratic Councillors of Essequibo Islands-West Demerara (Region Three) and other key stakeholders.

Minister Harmon also said that while the Ministry is executing its Social Cohesion Strategic Plan 2017-2021, the RDC, NDC councillors and other stakeholders must embrace it, for the benefit of their constituencies. “Social cohesion is not a nebulous concept…it is life. It is what you do in your communities, it is people working together, playing together for the benefit of their communities. You live it. You live in communities that require you to work together if you are to have the full benefit of what the region has to offer or what the Government, at the level of the State, has to offer as well,” he said.

Minister of Social Cohesion, Dr. George Norton emphasised this point, noting that the RDC has the power to effect change and to ensure that services are rendered equally across the region. “At the regional level, the role of the RDC cannot be overemphasised… Much of the development in a region is overseen by the RDC, which has the power to effect change… We need to work together as a people, regardless of ethnicity, gender, age, sexual orientation, political affiliation, socio-economic status [being] differently abled and other differences to build Guyana,” he said.

Several stakeholders requested assistance from the Ministry to implement programmes that would promote solidarity in their districts. Ms. Shanas Sattar and Mr. Erick Sukhlall, both of the Parfaite Harmonie Golden Jubilee Youth Group and Ms. Tanya Hooper of the Goed Intent Sisters Youth Developers also requested assistance to advance programmes aimed at keeping youth gainfully occupied. Stakeholders also raised concerns about crime, blocked drainage structures and the need for community groups to be developed and maintained.

Today’s workshop is the second workshop that the Ministry has held this week aimed at mobilising councillors to make the vision of a unified Guyana a reality. On Tuesday, August 22, 21 RDC and NDC councillors and administrative heads of the RDC of Demerara-Mahaica (Region Four) participated in a Diversity Education and Inclusion Workshop aimed at empowering them to play active roles in fostering unity within their constituencies. During the two-day session, which was held at the RDC office in Beterverwagting, East Coast Demerara, the councillors also developed a number of community projects to be implemented over two months that will enhance the lives of residents.

Minister Norton commended the councillors on the level of support that they provided to each other while drafting their plans. He noted too that if they continue to demonstrate these attributes throughout the project cycles, they would not only improve their communities but would have put social cohesion into practice by demonstrating an appreciation for each other’s skills, talents and diversities. “You are now more knowledgeable of the various forms of diversity and ways in which you can be inclusive as you carry out your various tasks… As councillors, you have a duty not only to share the knowledge that you’ve gathered here … but also to put it into practice and to effect the changes in Region Four,” he said.

Similar sentiments were expressed by Programme Coordinator at the Ministry, Ms. Sharon Patterson, who said that the councillors can play a vital role in fostering solidarity in their communities. “The focus is really where you take this knowledge … your own role in the social cohesion process,” she said.

Meanwhile, Chairperson of the Cane Grove NDC, Ms. Neemawattie Baldeo said that the members of her NDC are very co-operative and “we want to embark on community self-help projects and sports, which will bring our youths together, our older folks together, in general, the entire community and we want to [meet] with other NDCs so that we can share our experiences [and] probably gain some experience as well,” she said. Meanwhile, Ms. Ulita Moore of the Better Hope/La Bonne Intention/Plaisance/Beterverwagting/Industry/Triumph NDC said that they will be embarking on a self-help project that will involve the cleaning, clearing and desilting of drainage structures in four constituencies in each NDC, said that she is looking forward to the exercise.