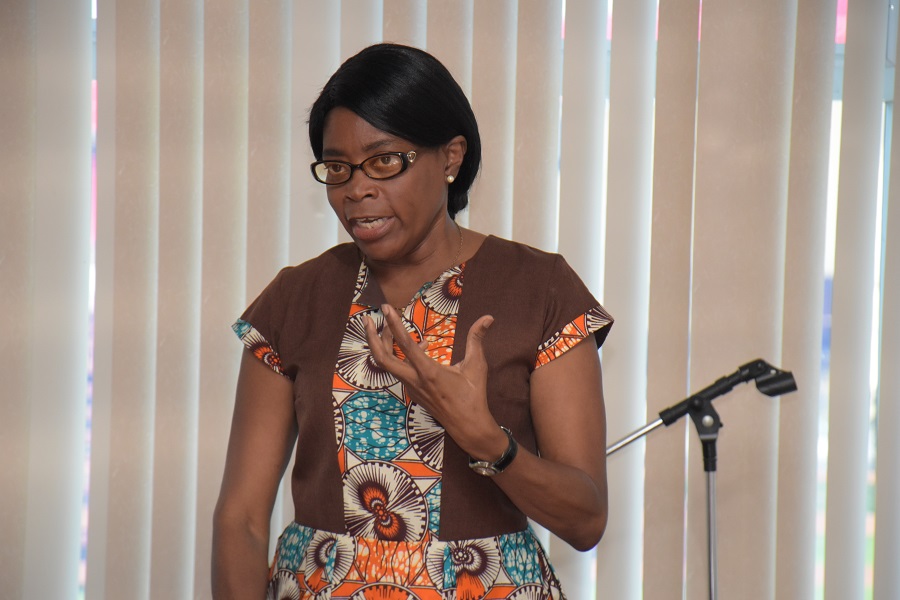 Georgetown, Guyana – (August 12, 2017) The Ministry of Social Cohesion, today, hosted another sensitisation workshop featuring a diverse group of participants representing various organisations, with the aim creating linkages and helping them to better understand Social Cohesion as an approach to community and national development. Programme Coordinator of the Ministry of Social Cohesion, Ms. Sharon Patterson facilitated the workshop, which was held at the Georgetown Racquet Centre on Woolford Avenue. This meeting will be followed up with a two-day training session slated for August 15-16, 2017 at the same location.

Ms. Patterson said that these workshops are geared towards enabling the stakeholders to examine their roles in promoting a harmonious Guyana. During her presentation, Ms. Patterson informed participants that as part of its long-term approach, the Ministry will be hosting other sensitisation events using the Whole School approach, which involves visiting schools in the ten administrative regions and speaking to both students and teachers about the importance of cohesion and harmony.

“There are programmes for in and out of school young people… We have done quite a lot of work with the religious community and some Parent/Teachers’ Associations. We will also continue our regional sensitisation sessions. Our training will continue in diversity education. It has scaled up as we move to training and mediation at the community level, negotiations, conflict management and other peace building initiatives,” Ms. Patterson pointed out.

Programme Coordinator of the Ministry of Social Cohesion, Ms. Sharon Patterson during her presentation at the workshop.

During the interactive session, concerns were raised by the participants, which were addressed by the Programme Coordinator. Ms. Valini Kirton-Leitch, who represented the Society Against Sexual Orientation Discrimination (SASOD), asked what the Ministry is doing to address discrimination against marginalised groups, including the Lesbian, Gay, Bisexual, Transgender and Queer (LGBTQ) community

Ms. Patterson in response said that SASOD was integrally involved in the consultation process. She added that the Social Cohesion Ministry has an inclusivity mandate and is working to ensure that no group is omitted and is currently engaged in dialogue with an international organisation to gain support to adequately address issues facing the LGBTQ community. She noted too that this matter is addressed in in the strategic plan.

Representative of Dubraj’s Tassa Troupe, Mr. Rajesh Dubraj called for more consultations with cultural and religious groups, since he believes that certain groups, which are integral to advancing cohesion, were excluded from the process. Ms. Patterson committed to having discussions with these groups and Mr. Dubraj offered to support the Ministry in identifying some of these groups.

Chief of the Guyanese Organisation of Indigenous Peoples (GOIP), Ms. Mary Valenzuela called for workshops to be held in the far-flung Indigenous communities, since persons there are unable to travel to the central locations of the interior to attend sensitisation workshops and other programmes. “There are so many Indigenous communities in these regions… Do you have plans in going deep South to make contact with these far-flung communities? Because you find that if you have a workshop or any programme it is mostly in a central community,” she asked.

Ms. Patterson said that the Ministry recognises the challenges for citizens in the sub-regions to travel to the locations where events are held. However, she assured that plans are afoot to address these concerns. She noted that the Inter-Village Social Cohesion Exchange Programme is geared at resolving this issue in the long-term, but she acknowledged that the process will take some time to be fully implemented.

In June, Minister of Social Cohesion, Dr. George Norton announced that over the next six months the Ministry of Social Cohesion will be working to develop and strengthen the capacities of community leaders and other stakeholders in several parts of Guyana, so that they would be better equipped to address matters related to social cohesion. Since then numerous workshops were held all across Guyana.

On July 11, 2017 the Councillors of the Mayor and City Council (M&CC) of Georgetown benefitted from a sensitisation meeting at the Chambers of City Hall, and on July 26, 2017, ninety-two stakeholders at the Moraikobai/Saint Francis Mission in the Mahaica-Berbice Region (Region Five) participated in the Ministry of Social Cohesion’s sensitisation workshop. In addition the Ministry collaborated with several other ministries in order to address needs in five areas; health, education, sport, neighbourhood security and social security within that community.

These sessions are integral as the Ministry continues to advance the work outlined in the Strategic Plan for Promoting and Enhancing Social Cohesion in Guyana 2017-2021 which, among other objectives, seeks to promote inclusive growth and reduce socio-economic inequalities in terms of income, ethnicity, social class or group, gender, geography, and demography; strengthen peoples’ participation, integration and sustainable development through enhanced governance mechanisms, and policies that promote environmental sustainability and inter-generational equity; as well as promote social inclusion and tolerance for diversity such as race, ethnicity, class, geography, sexual orientation, ability, religion, and culture.

Representatives of the Salvation Army’s Men’s Social Centre, the Indian Action Committee (IAC), the Georgetown Chamber of Commerce and Industry (GCCI) and the Mayor and City Council (MCC) were among those who were present at the workshop.