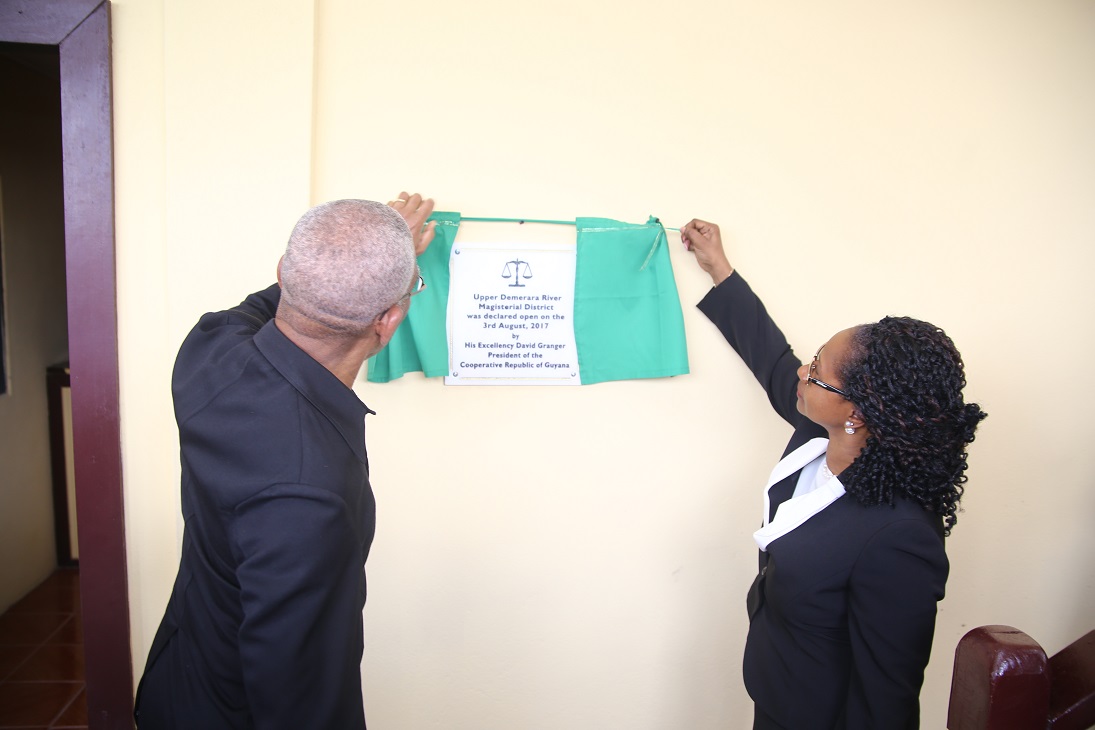 Georgetown, Guyana – (August 3, 2017) President David Granger said that the opening of Guyana’s 10th Magisterial District is not an instruction of the Executive. It is an initiative of the Judiciary and that in itself is a manifestation of the independence, which this critical branch of Government enjoys under the current administration. Speaking at a ceremony to mark the constitution of the Upper Demerara Magisterial District, the Head of State noted, though, that this initiative falls in line with Government’s push to improve access to justice for all Guyanese. The event was held at the Linden Magistrate’s Court.

In Guyana, the Summary Jurisdiction (Magistrates) Act empowers the Chancellor of the Judiciary to divide Guyana, or any portion thereof, into magisterial districts; constitute, in any part of Guyana, a magisterial district or districts; distinguish the districts by name and number and vary the limits of any district. “This Magisterial District brings the administration of justice closer to the people. It is aimed at timelier and less costly justice. It makes justice more accessible for this Region’s residents. This is a model, which can be replicated in each of Guyana’s ten administrative Regions. If citizens cannot come to the court, the court must come to the citizen,” President Granger said.

He told members of the Judiciary, who were present at the event, that the Executive Branch supports fully, the establishment of this new District as it is in keeping with the Government’s vision of enhancing delivery of and access to justice across the country. This Magisterial District will remove the need for residents of Linden, Ituni and Kwakwani to travel to Vreed-en-Hoop and New Amsterdam to access legal services.

“Access to justice, including ease of access, is every citizen’s legitimate expectation. Residents of their home regions should not have to travel long distances to access public services, including legal services in other Regions… Access to justice is difficult to achieve for the majority of this region’s 50,000 residents… The State has taken one small step, today, to abandon the archaic colonial system of counties, which existed from time immemorial and to adopt a rational system of regional administration,” the President said.

Speaking on how access to justice has expanded over the years, Chancellor of the Judiciary (ag), Justice Yonette Cummings-Edwards informed that in the first two decades of the 20th century, there were only four local magistrates in Guyana. Today, there are a total of 24, all of whom are Guyanese. With regard to this new Magisterial District, she said that in addition to regular court sittings, Municipal Courts will be introduced, which will assist the efforts of the Mayor and Town Council to protect the town’s environment. Moreover, Youth/Children’s Court will also be introduced, which will focus more on rehabilitating young offenders.
The sentiments expressed by the acting Chancellor and President Granger were echoed by President of the Guyana Bar Association, Mr. Kamal Ramkarran, who said that this new District means that justice has come home of the people of the Upper Demerara community. “This is a welcomed and important step to further improving access to justice. This new Magisterial District also means that as the needs of the people of the Upper Demerara River require in future there will be more courts and more magistrates in the District,” he said. —PTO—

Meanwhile, President Granger said that the Government is keen on ensuring that law and order is maintained in all communities and in this regard, will work to complement the work of the Judiciary by establishing police divisions in every Regional Democratic Council (RDC).
“Many residents in rural regions and the hinterland face everyday challenges to which they seek remedies. Residents, including victims of domestic abuse are trapped in loveless relationships with their abusers; mothers are denied access to their children because they cannot take their husbands and/or children-fathers to court… The law should be a great leveler. It should not be a weapon for the strong and powerful against the poor, weak and vulnerable. It emphasises citizens’ basic human right to have legal recourse and redress for wrongs committed against them and their property and for the preservation of public order,” the Head of State explained.

The Chancellor informed residents that Magistrate Clive Nurse will be resident the community and that hearings will now be held five days per week with the exception of the first and third Fridays of each month when sittings will be held in Kwakwani. Prior to this, the Court only sat one day per week in Kwakwani.

Apart from the residents, police too have been inconvenienced because to file a case in Linden, they have to travel to Vreed-en-Hoop, while residents in Kwakwani had to travel to Berbice. The Chancellor explained that this created an untenable situation, particularly for single mothers, who were forced incur high transportation costs just to uplift spousal and/or child support payments. “This hardship obtained because of the issue of jurisdiction. Kwakwani fell in the Berbice District and Linden fell in the Demerara District, but at the opening of this new court three years ago, Justice Carl Singh [former Chancellor] recognised the need for the new District and started the process for its creation,” she explained.
Subsequently, a survey was conducted by the Guyana Lands and Surveys Commission to define the boundaries and persons from Linden were trained at the Georgetown Magistrate’s Court, who will be working in the new District.

Attorney-at-law, Ms. Leslyn Charles, who is also a Lindener, said that while the building that once housed the Christianburg Magistrates’ Court held deep historical significance for the residents of Region 10, it has become wholly inadequate for court proceedings. However, the new Linden Magistrate’s Court, which was constructed on Burnham Drive in 2013 after the Christianburg Court was destroyed by fire, has all the modern amenities which, coupled with the constitution of a new District, will bring tremendous benefits to the residents of the Region. “For one thing, it will provide several new jobs in new career focus areas for young people in a town that still struggles to provide alternatives to the traditional bauxite industry jobs,” she said.

The ceremony ended with a ceremonial ribbon-cutting and the unveiling of a plaque by President Granger at the Court. The event was attended by members of the Judiciary, residents of the Linden community and officials from the Regional Administration and the Town Council.