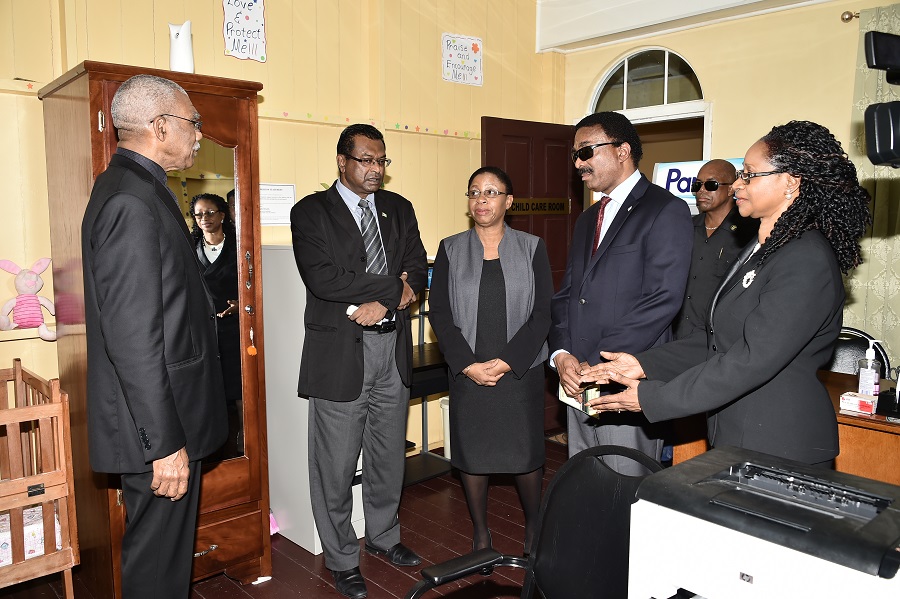 Georgetown, Guyana – (July 28, 2017) President David Granger said that the construction of the new wing of the High Court of the Supreme Court of Judicature is an investment that stands as testimony to the Government’s commitment to improving access to justice; noting that it will help to overcome the cost and complexity of litigation by providing access to specialised courts such as the civil, commercial, family and land courts, to deal with specialised cases. The Head of State made these remarks at the commissioning ceremony of the said wing which was held today at the Victoria Law Courts on Avenue of the Republic and Charlotte Street, Georgetown.

The President explained that equality before the law and equal protection under the law, which is protected under Article 149 (D) (1) of the Constitution of Guyana, can be guaranteed to citizens only where there is access to justice. “Access to justice ensures that citizens’ rights are protected, especially the right to a fair trial within a reasonable time; citizens can be heard, can exercise their rights and challenge discrimination; costs can be reduced by ensuring speedy trials and by the quick settlement of disputes… The opening of the new wing of the High Court, therefore, is the opening of a new chapter in our country’s quest to improve the administration of justice and to expand access to justice for all,” President Granger said.
The President’s contention was supported by President of the Guyana Bar Association, Mr. Kamal Ramkarran who said that “the opening of this new wing is only the latest in a series of developments which have transformed the face of legal practice in Guyana. These developments show clear commitment by the Government and the Judiciary to a significant improvement to and delivery of justice.”

President Granger noted that a fully functional judiciary and the establishment of an inexpensive and timely system of administrative justice are also important factors that allow citizens to enjoy access to justice. In this regard, in addition to providing the necessary resources for the establishment of a new head office for Land and Commercial Registries and the new High Court wing, the Government has moved to ensure that vacant judicial offices are filled. In the last two years, the Judicial Service Commission has been appointed; a new acting Chancellor and Chief Justice were sworn into office; High Court and Court of Appeal judges and an Ombudsman were appointed and the Public Service Appellate Tribunal was reconvened.

“These appointments were in keeping with our desire to ensure the smooth administration of justice and that the public has access to justice in a timely and inexpensive manner,” President Granger said.

Chancellor of Judiciary (ag) Justice Yonette Cummings-Edwards informed that the new structure is accompanied by the new Civil Procedure Rules and the Family Proceedings and Procedure Rules. These new regimes are aimed at expediting hearings which would lead to the faster disposal of cases. “Since these new rules have been implemented, within the last five months, we have to date 1,258 cases being filed and almost half of these cases have been disposed of already,” she said.

Turning his attention to the Judiciary, the President reiterated his Government’s intention to ensure that the independence of this critical branch of government is safeguarded. The enactment of the Fiscal Management and Accountability (Amendment) Act shortly after the Administration acceded to Office in 2015 is a clear indication of this commitment.

The new wing comprises three civil courts and the Land Court, which was housed in the Maraj Building on Charlotte and King Streets before moving to Brickdam. Justice Cummings-Edwards said that the new wing has allowed for all of the divisions of the High Court to be housed at one location. “This allows for easier physical access for litigants and attorneys-at-law, it allows for easier management of the court and the registries and the saving of cost and expenses,” she said.

The Acting Chancellor informed that the vision for the construction of this new wing was initiated by former Chancellor of the Judiciary Justice Carl Singh. She even suggested that the wing be named ‘Chancellor Carl Singh’s Wing’.

Justice Cummings-Edwards also informed that plans are afoot to create an ‘E-Judiciary’, whereby all of its operations are digitized. She said that this will further improve access, delivery and dispensation of justice.