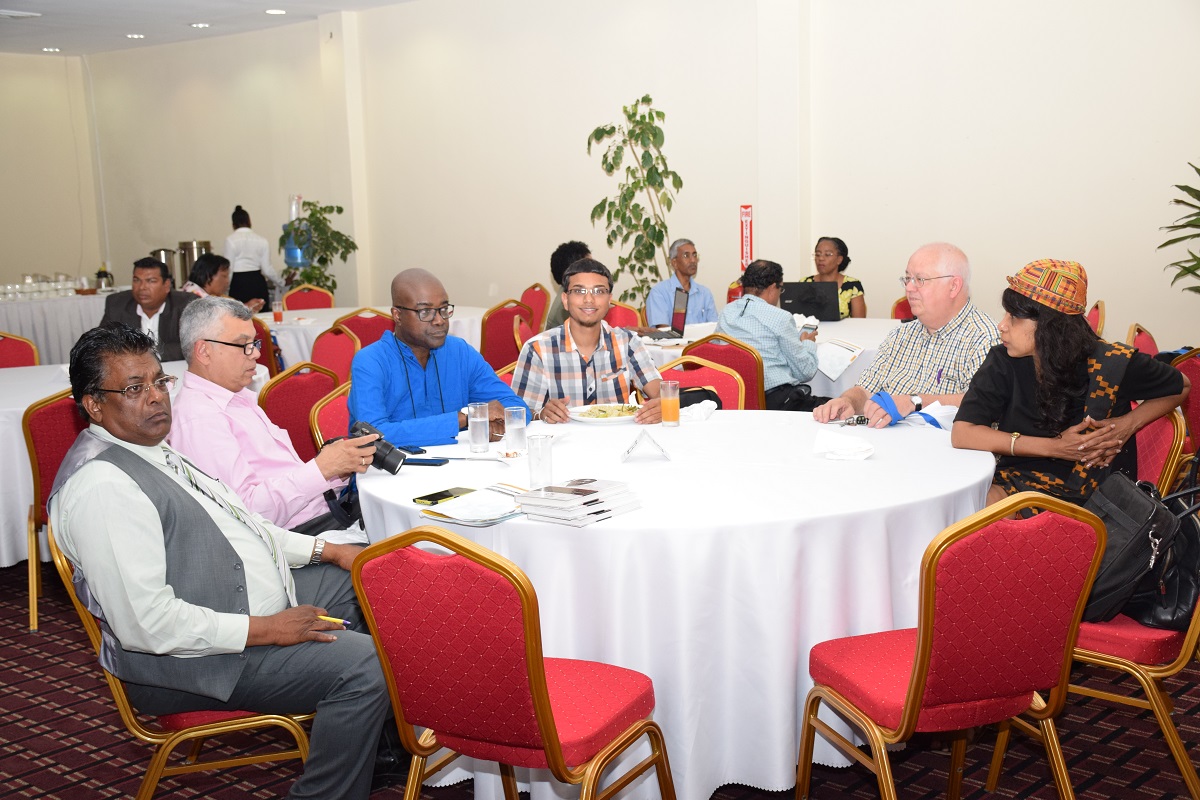 Georgetown, Guyana – (July 26, 2017) Minister of State, Mr. Joseph Harmon, today, said that the Government of Guyana is committed to working with and engaging the Guyanese diaspora as, he noted, it possesses valuable skills, resources and talents, which can contribute to the growth and development of the country. The State Minister was at the time delivering an address at a special lunch for the University of Guyana’s Diaspora Engagement Conference of the Education Resource Ambassadors, at the Ramada Princess Hotel. The Conference is being held from July 23 to 28, under the theme, “Dreaming Diaspora Engagement, Doing Diaspora Engagement.”

Minister Harmon said that the Government of Guyana recognises the crucial past, present and future roles of members of the diaspora in the nation’s affairs. “Our administration led by President Granger has used every opportunity to emphasise the importance of the diaspora to our country’s development. Our administration also recognises that the Guyanese diaspora include some of our brightest, most talented and best trained people, who possess enlightened work ethics from being in more developed societies and that it constitutes a vast reservoir of resources and talents needed here at home to help to confront the challenges of development,” he said.

It is for these reasons, he said, the administration has sought ways and means of meaningfully engaging the diaspora, including the further development of the Guyana Diaspora Project, which was initially launched in 2012. This was done, he said, with the expressed objective of streamlining, in a sustainable way, the interaction and relationship between the Government of Guyana and the Guyanese Diaspora.

“I wish to underscore the fact that our on-going sustainable thrust to engage the diaspora goes way beyond obligatory efforts at fostering national identity and highlighting our cultural diversity abroad. Instead, the Government of Guyana’s enhanced diaspora engagement efforts also include, critical national development pursuits that seek to harness the expertise, resources, capacities and goodwill of the diaspora, which comprises our country men and women across the globe and who perhaps, outnumber us who reside in Guyana,” the Minister of State said.

Minister Harmon said that the Government of Guyana is extremely mindful of the importance of each of the constituent groups that make up the Guyanese diaspora, whether in the Caribbean, North America, Europe, Africa, Asia or elsewhere. Further, the Minister said that diaspora engagement in today’s world has taken on proportions that have evolved out of the complexities of an international arena in which rights and privileges are sacrosanct. Similarly, national Governments, not excluding Guyana, have had to be cognisant of these global shifts and take appropriate action at the local levels.

“It is in this context that diaspora affairs have not only grown in complexity and influence but also in relation to the demands on and the expectations of the national governments. As such we are a Government committed to ensuring a level playing field for Guyanese abroad, wherever they may be and that at all time, our stated and functional diaspora strategy reflects this policy in a transparent and even handed manner,” he said.

Minister Harmon, in providing an update on the New Diaspora Engagement Strategy and Action Plan, which is being developed with the help of the International Organisation for Migration (IOM), said that it will be made available to the participants for them to give their thoughts and suggestions. This Plan will formally guide the Government’s relationship with the diaspora.

The Action Plan is expected to address the concerns, which members of the diaspora have and have had over the years. This comprehensive policy document, Minister Harmon said will not be a dormant white paper but will instead, be a policy guide that will require stakeholders to adhere to principles based on international and other proven best practices and will be predicated on the unavoidable pervasive precepts of accountability and transparency. This, Minister Harmon said, is a clear demonstration of the Government’s commitment to including and engaging the diaspora.

“I have to no doubt that its culmination in the establishment of the Diaspora Engagement Centre will help to provide more structured and meaningful engagement of our people in the diaspora. I also think that the expressed intention to provide a neutral arena of engagement will be most useful,” he said.

Vice Chancellor of UG, Professor Ivelaw Griffith, in brief comments, said that the engagements over the past few days have been very fruitful. He noted that the participation and interest of the Government and its Ministers, is also heartening even as the University is playing its role in bridging the gaps, which exists.