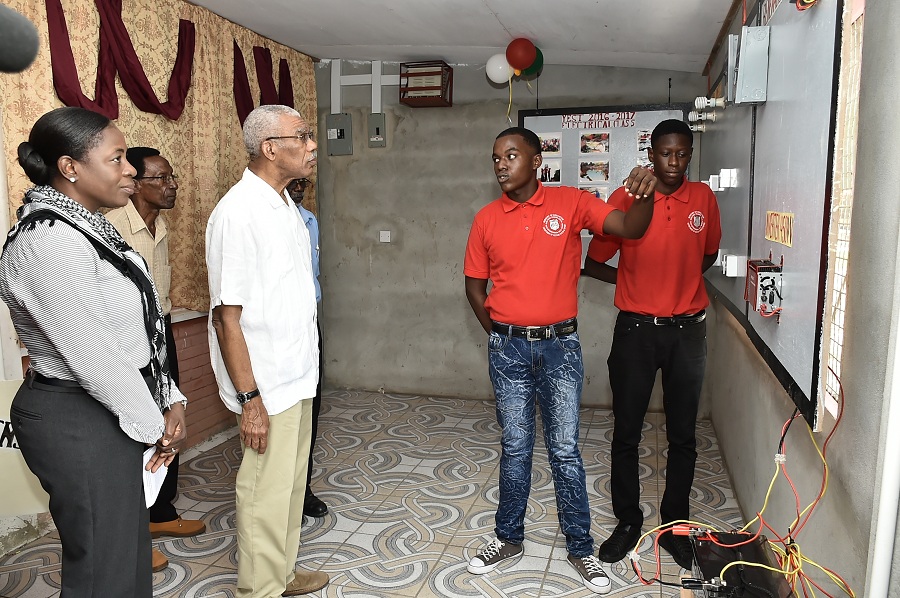 Georgetown, Guyana – (July 20, 2017) President David Granger, today, conducted a fact-finding visit to the Kuru Kuru Training Centre (KKTC) located on the Linden-Soesdyke Highway to meet and interact with students and instructors with the view of ensuring that the programmes being offered by the facility are adequately tailored to the developmental needs of the country and improve the employability of the young apprentices. The Head of State was accompanied by Minister of Education, Ms. Nicolette Henry. This visit follows the President’s earlier engagement with the young people housed at the New Opportunity Corps. Over the next few weeks, further visits will be conducted at other institutions that cater to youth development.

The President explained that his Government is not interested in a partially educated nation. “We will continue to improve this programme to make sure that more young people from all over the country can get back into the world of work by a form of assistance, which we will provide to the Ministry of Education. This is what the Ministry of Education is all about… We are interested in seeing the maximum number of students attend the University of Guyana so that this becomes an education nation. We are interested in ensuring that every single child is literate and numerate and that every single person in this country is employed. This is our aim and despite the limitations that we have your Minister, the Ministry and the staff of KKTC will continue to work to ensure that you get the best possible education,” he said.

The Head of State told the students that on January 1, 2018, the Government will be launching the Guyana National Youth Corps, which will be responsible for coordinating the youth programmes that are being administered through the various sectors so as to ensure that they are being conducted in a manner that will offer Guyana’s youths the best opportunities for self-development.

Speaking of the intrinsic link between education and gainful employment, the President noted that too many youths are at a disadvantage in the job market simply because they were unable to complete their formal education. “We have been trying to get children to stay in school so that they are not deprived as adults. Without a formal education you are very likely to be unemployed,” he said.

With Guyana transitioning into a ‘green’ state, President Granger urged the students to pay particular attention to the way they treat the environment; noting that the environment can play a major role in creating the good life that citizens seek. He also urged them to make a conscious effort to lessen their dependency on fossil fuels by developing their capacity to harness power for renewable sources of energy.

Following to the President’s remarks, the students were given the opportunity to speak openly of their experiences during their time at the Centre. Many of them, who will be graduating tomorrow, have indicated their intention to pursue higher studies, which the President was extremely pleased about.

Mr. Chris Bowman, a student from West Demerara, said that when he enrolled at the institution he knew nothing about electrical installation. Today, he is skilled in this area and he looks forward to pursuing higher education at the Government Technical Institute (GTI).

Another student, Colin Sealy said that he completely endorses the President’s call for the increased use of renewable energy. Mr. Sealy, who described himself as “multi-skilled”, also plans to further his studies at GTI and subsequently, the University of Guyana. Ms. Charlene Junor, who hails from Mahdia has completed the business course. She too plans to further her studies and before setting up her own catering business.

Mr. Neilon Lewis, who is part of the motor mechanics class, said that in addition to gaining a skill, he has gained life-long friendships, referring to his dorm mates as his brothers. Mr. Lewis is now looking forward to joining the Guyana Defence Force’s Cadet Course.

The KKTC provides skills and vocational training programmes in a number of areas including business studies, carpentry, electrical installation, joinery, masonry, motor mechanics, plumbing and sheet metal, welding and fabrication. The programmes run for a duration of 10 months and cater for youths between the ages of 16 and 25, particularly those who were unable to complete their formal education.