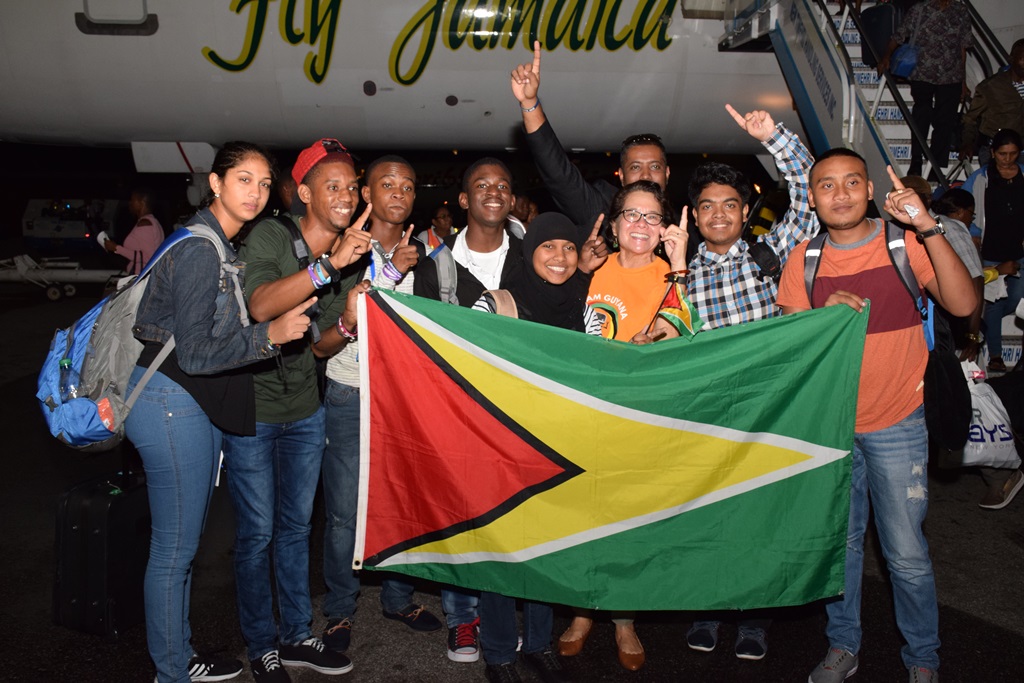 Georgetown, Guyana – (July 20, 2017) First Lady, Mrs. Sandra Granger, last evening said that the recent success by the Science, Technology, Engineering and Mathematics (STEM) Guyana team at the 2017 First Global Challenge in Washington, D.C is a testimony of what investments, particularly by Government and the Private Sector in STEM education can yield for young Guyanese. The team, which placed 10th out of 165 countries overall, was enthusiastically received by the First Lady as well as several other Government officials last evening at the Cheddi Jagan International Airport, after three days of fierce competition in the United States.

In an invited comment on the side-lines of the welcome reception, Mrs. Granger said that despite being exposed to Robotics training just months ago, the team was able to compete among countries such as Russia, China and the United States, even topping the points board on Day One of the competition. She noted that despite encountering severe challenges, the team was able to overcome and this must be commended.

“I think that the way our team has performed by coming 10 out of 165 countries, has shown what can be done when we consider that we have not had Robotics in this country for even a year and our young people have come together, worked as a team, demonstrated their skills and have also become very good Ambassadors for our country because we saw how they interacted with the other teams and supported even their rivals to bring a different level of sportsmanship. The Guyana team was skipping breakfast to help the other team build their robot and so these are the things that our young people did that have made us proud. They not only knew what they were doing in the Robotics aspect but they were mature, they were very sportsman like, they were very generous and I think that they did themselves and their countries proud,” First Lady, Mrs. Granger said.

First Lady, Mrs. Sandra Granger poses with the STEM Guyana team upon their arrival at the Cheddi Jagan International Airport

This, she said, demonstrates what can be achieved by the young minds of Guyana once the opportunities are presented and all the necessary investments made. Since her husband’s assumption to the Presidency in 2015, Mrs. Granger has been placing heavy focus on training programmes particularly in the area of Information and Communication Technology (ICT), which are being run parallel to the President’s National Endowment for Science and Technology (NEST) programme, which provides funding to schools for investment in STEM.

Mrs. Granger explained that she is determined to ensure that every town, village and community is now targeted so that every child can become exposed to the possibilities of STEM education. She noted that once facilities and opportunities are made available, more children will be drawn to these areas of study and this can only lead to the further growth and development of the country.

“My concern has always been that young people can see all the possibilities and STEM offers them those opportunities; that they can see themselves developing and getting into a profession that they will love. Any child today is absorbed in technology so you have to stimulate that interest and maintain it and through STEM. My main focus is to get it to every child and I mean every child in the rural areas, the hinterland, the towns, in our less well-endowed communities and challenged homes, to give them that opportunity to see that they can do it and that has been our experience wherever we go with the Robot kits and so the aim is to get every kid in Guyana into Robotics,” she said.

Mrs. Granger said that overseas- based Guyanese, Ms. Karen Abrams must be commended since the journey to the First Global Challenge began with her bringing the Robotics Camp to Guyana in August 2016. “The first person to be commended here is Karen Abrams who had the idea of bringing Robotics to Guyana because while she is a transplanted Guyanese her heart is very much here and she recognised how important it was for our kids to be versed in STEM and Robotics. The data show that computer science will be required for 75 percent of the jobs in the near future so she came to me with the idea and it just went from there. My office has been privileged to provide the support needed when she set up the first Robotics Camp and there was also interest and support from Guyanese in the diaspora and from local corporate bodies who supported it from the inception,” Mrs. Granger said.

With the recent success, the First Lady disclosed that talks have begun with Ms. Abrams to set up leagues and clubs in Guyana, which can promote and grow Guyana’s interests and talents in Robotics.

Ms. Farnaz Khan, the team Manager, in an invited comment, said that the Guyana team is proud of its accomplishments since its challenges were numerous but they were determined to make the nation proud.

“The boys stayed up till about 3 ‘O’ clock in the morning to ensure that all was well and then on the second day, there was a connection problem. Despite the connection problem and about a minute delay, we did well and reached tripled digits. The last game on the Monday was another great experience and we saw Guyana on top but Tuesday, that’s when we faced a lot of problems not with our robot but the countries we were paired with. There wasn’t proper communication and Ivory Coast did not have a proper mechanism. We tried to help them build their Robot in two hours but unfortunately we could not finish it and when their Robot reached on the field, it shut down and so Guyana was the only one who helped the country to most of the points so that’s how we dropped from the points table,” she explained.

Ms. Khan said that the inspiration for the Robot was drawn from all across Guyana, particularly the Koker system, the rice combines and lines used to hang clothes in some households. “Our entire robot is drawn from inspiration around Guyana and Guyanese culture. We used the Koker system here in Guyana to design our pull up mechanism for the robot and we were able to score top points in all six rounds for that; the conveyor, which was placed in front to collect the balls, that inspiration came from combines used in the rice fields and in Guyana we use clothes line so we used something like that to hold the shafts apart in the robot,” she said.

One of the other participants, Christopher Nelson, said that he now looks forward to bringing his experience, skills and knowledge back home to promote STEM education and development in all communities since it is his belief too that it must be made available to every child.

“We now have a responsibility to capture some of the youths into Robotics. Some Guyanese feel that getting involved in Robotics and STEM that you have to be a high flyer but that is not true and so we now have to motivate persons to come out and get involved so that Guyana can have a better future and be a better place,” he said.

Meanwhile, Director of Sports, Mr. Christopher Jones, said that the National Sports Commission is proud to have been able to lend support to the team since it recognises the importance of STEM in Guyana and recognising too that TEAM Guyana was able to compete with countries, which are far more advanced.

“Team Guyana was our beacon light of hope and essentially that beacon light went to the US and represented us and that door of people across Guyana having access to STEM has been opened and no one and no Ministry will deny access to funding for initiatives such as this and we were happy to play our part,” he said.

Mr. Lance Hinds, who represented the Minister of Public Telecommunications who is currently out of the country on state duties, said that for Guyana to compete for the very first time against 165 countries who have been doing it for some time and come out in 10th place is a momentous occasion and can only serve as a great motivation as the team competes next year and further afield.

He noted that the Ministry is committed to building an enabling environment for ICT to grow and to have an ICT ready workforce to compete regionally and internationally.

“That is the mission of the Ministry. We supported this activity and we will continue to do so and with the plans we have along with the First Lady’s office, we can only see this growing from strength to strength,” he said.

Mr. Carl Bowen, Commercial and Marketing Manager of Fly Jamaica Guyana, which provided the air tickets for the team to travel, said that company is pleased to fulfil its social corporate responsibility especially in the area of sports.

“We have been supporting healthcare, sports and education greatly in Guyana and for the last five years anyone who calls, we are able to someway, somehow help them and we are able to do this because of the support that we get from the country. It is expensive to travel as a team but we do feel a social responsibility and we will fill the gaps. We will take on that role and support the teams especially in healthcare, education and sports,” he said.