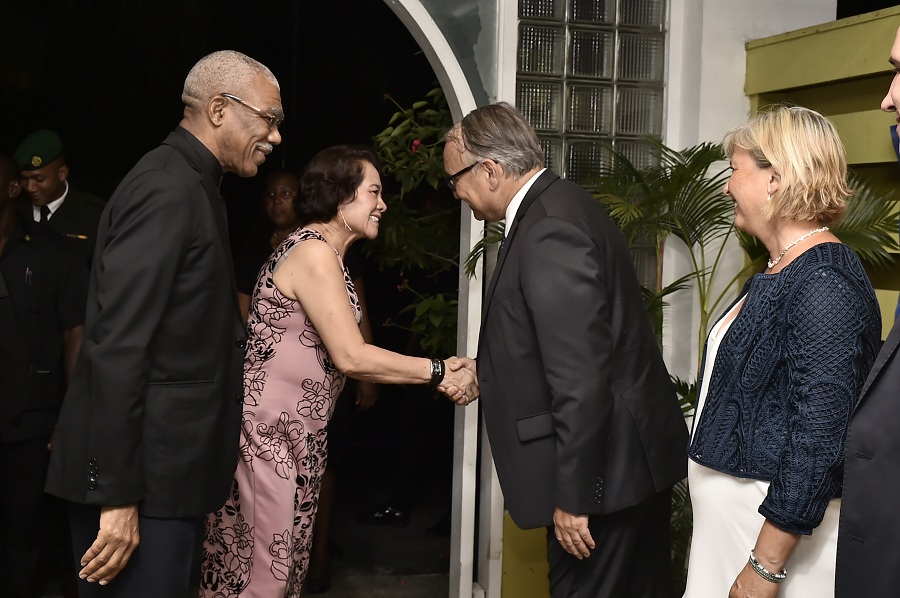 Georgetown, Guyana – (July 11, 2017) President David Granger said that as Guyana pursues its ‘green’ agenda, it looks forward to intensifying its 50-year old diplomatic relationship with France especially as it relates to environmental protection, an area in which the two countries share common concerns. The Head of State made these remarks this evening at a reception to commemorate France’s National Day held at the Georgetown Club.

“Guyana, located within the Guiana Shield; a global environmental asset, remains irrevocably committed to establishing a ‘green’ state. We will place an additional two million hectares of our forests under conservation as part of our contribution towards protecting the world biodiversity and providing climate mitigation services to the world,” the President said.

The pledge of placing an additional two million hectares of forest under conservation is one which the Guyana made in the signing of the landmark Paris Agreement in France two years ago. President Granger noted that Guyana fully supports France’s decision to take further action to advance the aims of the Agreement.

President David Granger and First Lady Mrs. Sandra Granger are greeted by Ambassador Antoine Joly as they arrive at the France’s National Day reception at Georgetown

“We will reduce our carbon footprint by embracing various sources of renewable energy generation. We will strengthen our coastal zone management to enhance our resilience against rising sea levels and flooding. Guyana looks forward to the support of the French Republic in advancing our ‘green’ developmental agenda,” the Head of State said.

Meanwhile, French Ambassador to Guyana, Mr. Antoine Joly said that the celebration of the French National Day in this country is special because it is an opportunity to celebrate the respect and friendship between the two countries and expressed satisfaction that France and Guyana both recognise the importance of protecting the environment and working to mitigate the effects of climate change. “We share the same vision of a multipolar world, which has to move forward in a better coordinated management and my Government truly appreciates the partnership, which was able to be formed on the occasion [of the signing of the Paris Agreement on climate change],” he said.

Describing Guyana and France as neighbours, the Ambassador pointed to the fact that French Guiana is part of the Guiana Shield and has a shared obligation to protect the biodiversity of that region. Ambassador Joly said, “We have to address the same challenges… that of the environment; this unique heritage, which constitutes the Amazonian forest.” The Ambassador also pointed that security and sustainable development are challenges that France, with responsibility for its overseas territory, shares with Guyana.

President Granger also used the opportunity to call on France, as a partner with Guyana, to ensure that the interests of the Small-Island Developing States (SIDS) of the Caribbean are protected even as the European Union (EU) commences negotiations on what would soon replace the Cotonou Agreement.

The President was accompanied to the event by First Lady Mrs. Sandra Granger. It was also attended by Prime Minister Moses Nagamootoo, Minister of State, Mr. Joseph Harmon, Minister of Agriculture, Mr. Noel Holder and members of the diplomatic community. France’s National Day or La Fête Nationale, commemorates the storming of the Bastille on July 14, 1789. This event triggered the French Revolution, the impact of which resonated in the Caribbean as it not only influenced the Haitian Revolution but it also intensified the struggle for emancipation and colonial liberation in the Region.