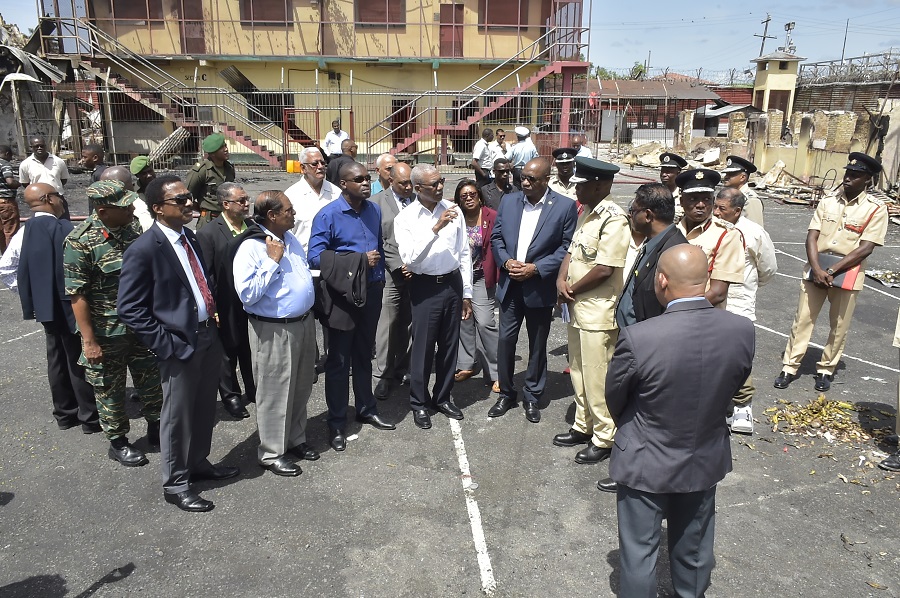 Georgetown, Guyana – (July 11, 2017) President David Granger made it clear that the Government has no intention of rebuilding the Georgetown Prison as it was previously configured and assured Guyanese that his Administration will exhaust all efforts to ensure that the prison system is more secure and not susceptible to the cycle of disturbances, which Guyana has witnessed over the years. The Head of State made these remarks today, in a brief comment to the media, when he visited the site at Camp Street. He was accompanied by Prime Minister Moses Nagamootoo, members of his Cabinet and senior officers from the Joint Services.

While there is expected to be some facility at that location, Government intends to move away from having its main correctional facility in the centre of Georgetown. “We will have to go back to the drawing board to determine whether it is appropriate to have at the centre of the City, a facility like this… We are not going to have the same type of facility here again; that much I can say at present. The devastation here is almost total and we don’t have intention of rebuilding it as it was before,” the President said.

President David Granger, Prime Minister Moses and Cabinet members today conducted a site visit at the Georgetown Prison to get a first-hand look at the damage caused by Sunday evening’s fire
​

He noted that the three major prisons in Guyana, Mazaruni, New Amsterdam and Georgetown, which were constructed by the British, might have been adequate over 100 years ago but that is no longer the case. While the Administration has been making changes, it has been constrained by the limited resources that are available. These changes include the implementation of the recommendations in the report of the Commission of Inquiry (CoI), which was launched into the March 2016 prison riot. “We were aware of the situation and we were acting on the recommendations of the CoI. We know that we had to strengthen Mazaruni; money had been provided and the Administration was actually in the process of expanding and improving those facilities when this occurred,” he said.

Over 1000 inmates from the Camp Street Prison were displaced on Sunday evening after a few of them set the facility ablaze in their bid to escape.