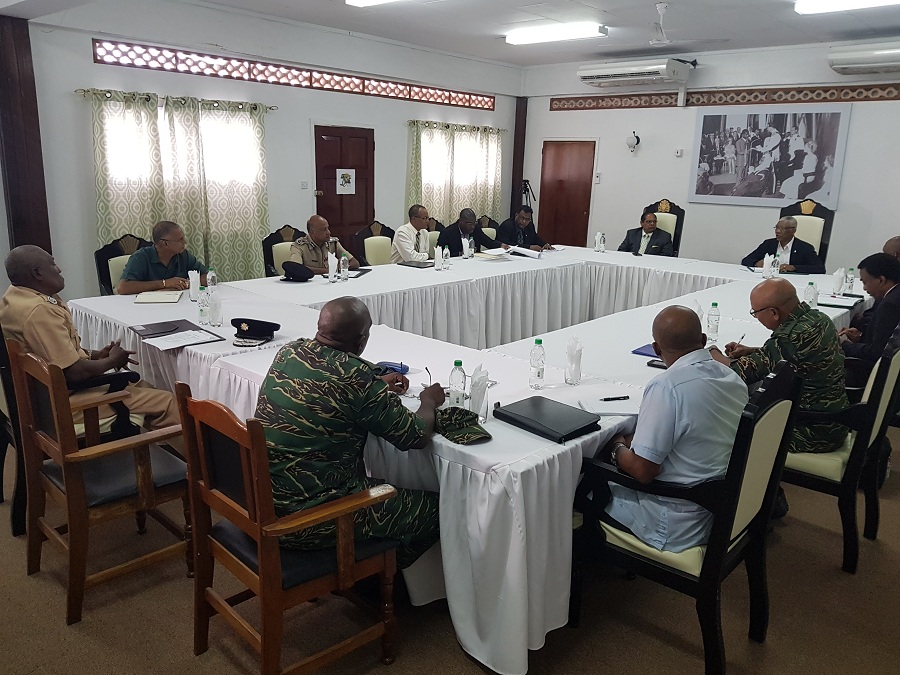 Georgetown, Guyana – (July 10, 2017) In the aftermath of Georgetown Prison riot, the Government of Guyana has approved the immediate implementation of a four-part emergency plan, which includes the construction of temporary structures to house the displaced prisoners in the short term, the completion a recovery operation to account for and accommodate every single prisoner, implementation of legal measures to immediately reduce the prison population and, importantly, the immediate recapture of the five inmates, who escaped custody.

This is according to President David Granger, who in an address to the nation this evening, assured citizens that the National Security Council (NSC), which held its second meeting since the incident at Camp Ayanganna today, will continue to remain engaged to coordinate and implement immediate measures to ensure that the situation remains stable and secure and that there is a return to normalcy.

By the end of today, close to 300 inmates should be safely relocated to various detention facilities across the country, including at Mazaruni, New Amsterdam and Timehri. The remainder will be housed at Lusignan, where temporary facilities are currently being installed by engineers from the Ministry of Public Infrastructure. Tents, in addition to the portable toilets, are being set up to protect inmates from the elements, while construction begins on three holding shelters, washrooms and reinforced gates. A budget of $18M has been approved to execute these works.

With regard to the legal measures, Minister of Public Security, Mr. Khemraj Ramjattan informed that six magistrates from different magisterial districts were at the Lusignan Prison to review the records of inmates, who are eligible for release between now and August, for the purposes of early release. They are also looking at releasing on their own recognisance, inmates, who have been incarcerated for minor, non-violent offences and reducing bail for those who could not have afforded to post the initial court-ordered sum.

Minister of Public Infrastructure, Mr. David Patterson, who was part of the meeting, also informed that his Ministry in collaboration with the Guyana Fire Service and the Guyana Prison Service will commence the process of removing debris at Camp Street and restorative works will be carried out on the brick prison located within the precincts of that facility. This building, which received minor damages from the fire, has the capacity to house about 250 prisoners.

While these measures are being put in place, President Granger also informed that “the Government is continuing to implement the major recommendations that were made by of the Commission of Inquiry into the March 2016 prison riot. These include the expansion of the infrastructure of the Mazaruni Prison.”

Minister Ramjattan is appealing to citizens who might have information on the five inmates that are on the run, to come forward and cooperate with law enforcement officers. The next 72 hours, he said, will be critical in terms of implementing the four point plan. “We should reduce the number at Lusignan from 1000 to about 450 by virtue of what we are doing administratively and also by the process of transfers… So it is a very complex set of arrangements that we are putting in place to ensure the safety of all as well as the recapture of those who have escaped,” he said.

Meanwhile, President Granger paid tribute in his address, to Prison Warden, Mr. Odinga Wickham who succumbed to his injuries last evening. “I mourn the loss of Prison Warden Odinga Wickham, who was murdered in the execution of his duties and I extend condolences to his family. We will ensure the best medical attention is given to everyone else who received injuries in the riot,” he said.

He also expressed the Government’s appreciation to the security forces, who responded resolutely to this emergency under difficult circumstances worked through the night to contain the situation and limit the loss of life.