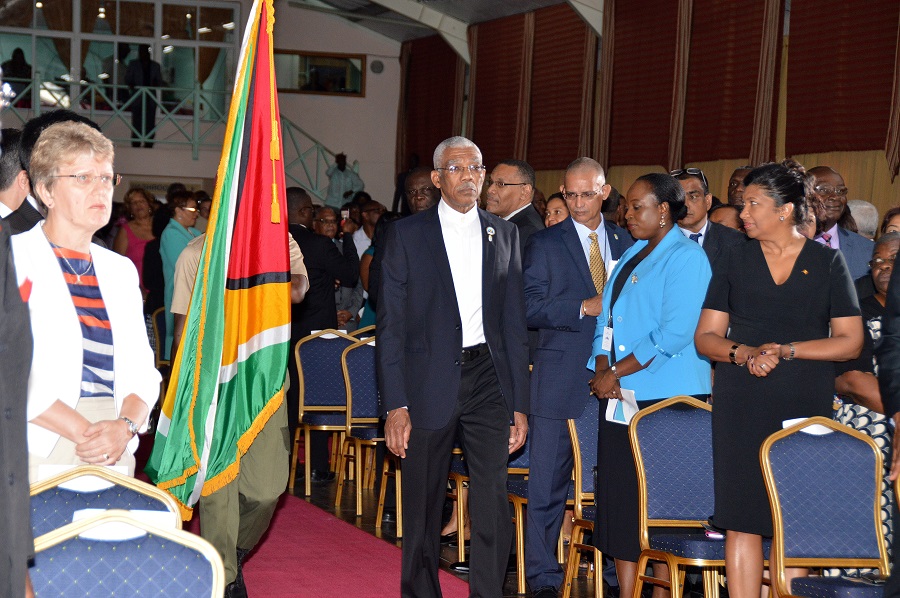 Georgetown, Guyana – (July 8, 2017) Even as Guyana welcomes the continued support of the region with regard to the Venezuelan border controversy, the country is in full support of the Caribbean Community’s (CARICOM) position on the political instability in the Bolivarian Republic. President David Granger, during the just concluded 38th Meeting of the Conference of the Heads of Government of CARICOM in Grenada, said that the events in Venezuela are a reason for concern in terms of overall regional security and added that Guyana would like to see that country returned to full democratic rule.

Referencing CARICOM’s position, as outlined in a statement by the Heads at the close of the Meeting on July 7, where “CARICOM Heads of Government… reaffirmed their guiding principles of adherence to the rule of law, respect for human rights and democracy, as well as for the fundamental principles of non-intervention and non-interference in the internal affairs of states”, President Granger, in an invited comment, said that he supports a return to order in Venezuela without external interference.

“We do not want the Caribbean to become a zone of instability… We do not want to see the perpetuation of disorder, and we hope that the Venezuelan people would return to full democratic rule and full public order as quickly as possible without the interference of third states. That is our ambition. We don’t want to intervene. Venezuela, I think, is one of the most mature democracies in the Region. It has a tradition of elections. Right now they are undergoing some instability and we want to make sure that at the end of the day, the Venezuelan people are satisfied with the outcome; it’s peaceful and they return to full democratic rule,” he said.

Guyana, as a neighbouring state to Venezuela, has particular interest in the current situation and President Granger has kept Guyana’s interests on the front burner of the regional body. “On every occasion we have to fine-tune; I would say calibrate our positions and as Chairman, around the time of Guyana’s Independence [anniversary] on the May 26, actually while other people were celebrating, I was communicating with the other Heads about the position we would take with the situation in the Bolivarian Republic of Venezuela.

Meanwhile, in the Communique issued at the close of the Heads of Government Meeting, CARICOM “reiterated the firm and unequivocal support of the Caribbean Community for the maintenance and preservation of Guyana’s sovereignty and territorial integrity”. President Granger noted at the closing press conference that Guyana has always been able to rely on the regional body on this issue. The Guyanese Head of State said, “Since CARICOM has been established, the Caribbean has always stood behind Guyana and we are very satisfied with not only the Caribbean but also the Commonwealth and other countries around the world that realised that the Venezuelan claim is completely absurd and spurious and we have always been able to rely on the support of our colleagues.”
The CARICOM Heads also joined Guyana, according to the Communiqué, in recognising the strong commitment of the Secretary-General of the United Nations (UN) to the process of coming to a final resolution to the border controversy.

“Heads of Government welcomed the appointment of His Excellency Dag Nylander as Personal Representative of the UN Secretary General in the Good Offices Process for the duration of 2017, with a strengthened mandate of mediation. They noted that “if by the end of 2017, the Secretary-General concludes that significant progress has not been made toward arriving at a full agreement for the solution of the controversy, he will choose the International Court of Justice as the next means of settlement,” unless the Governments of Guyana and Venezuela “jointly request that he refrain from doing so,” the Communiqué stated.

President Granger noted that CARICOM leaders have worked hard to, as far as possible; speak with one voice on foreign policy matters. “Foreign policy coordination is one of the pillars of the Community and as I pointed out before, it’s like a house, if you knock down the pillars the house would fall. So I attach every importance to foreign policy coordination. It’s very difficult because we’re not only a Community, but we’re independent nation states, which have to pursue what they call the national interest and sometimes it collides with the Community’s interests. So it’s a work in progress,” President Granger said.
President Granger believes that the work CARICOM has done to come to collective positions on these matters has served to test and strengthen foreign policy coordination. He reiterated the importance of such coordination during his address at the opening ceremony of the Meeting. “The Community might be an association of small states but it is larger and stronger when it is united. It must not underestimate the value of its solidarity or its strength when it speaks with a single voice as a Community. Solidarity is a source of strength. Foreign policy coordination is the sharp instrument, the cutting edge, of our diplomacy, to gain our great advantage. We should not damage it,” he said.