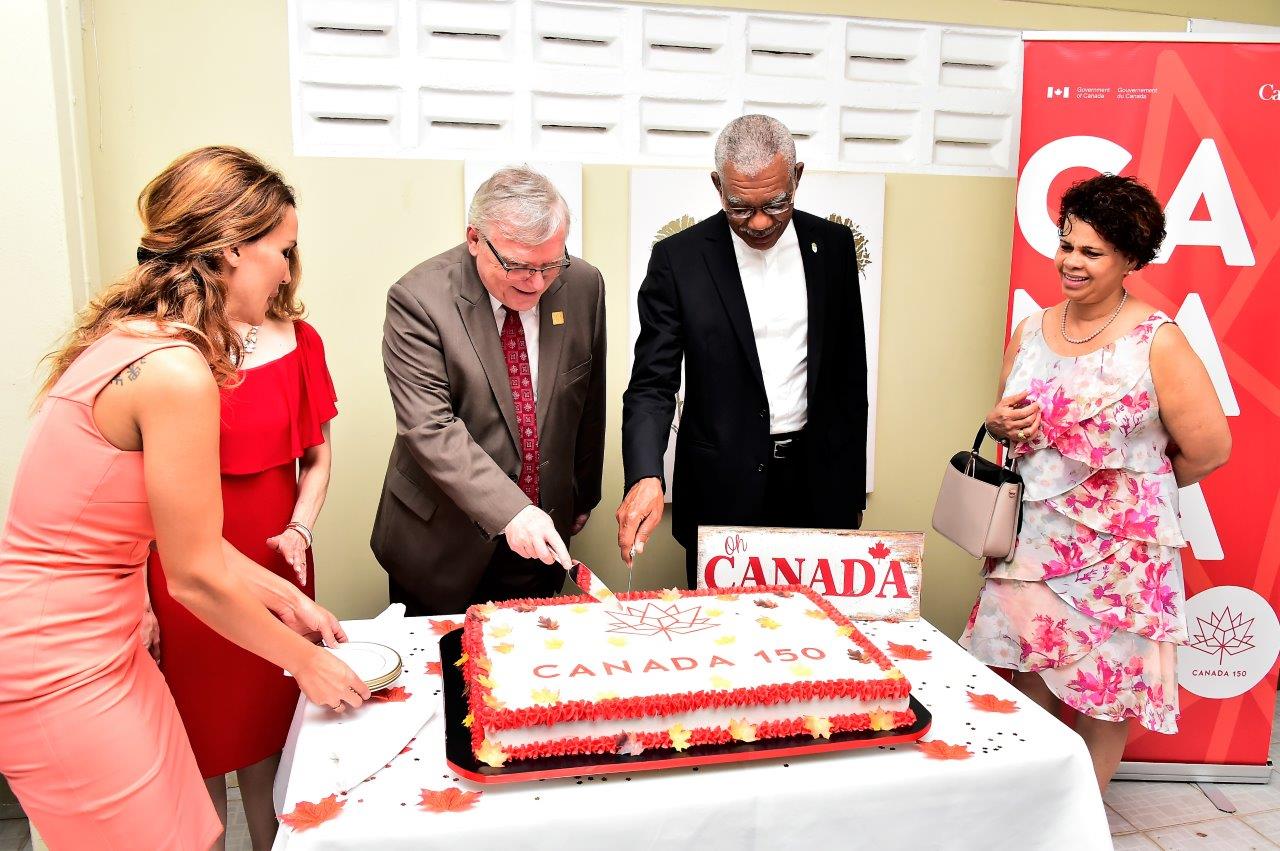 Georgetown, Guyana – (July 1, 2017) President David Granger said that as Guyana works to develop a more socially cohesive society, it looks forward to sharing experiences with Canada, a country that can serve as a model of diversity and inclusion and which is renowned for its openness to immigrants from all round the world. The Head of State was at the time speaking at a reception hosted by Canadian High Commissioner, Mr. Pierre Giroux at his Bel Air residence to commemorate the 150th Anniversary of the Canada Confederation.

“Guyana, though considerably smaller in size than Canada, is also a multi-cultural, multi-ethnic and multi-religious society. Guyana is pursuing social cohesion so that all of our peoples, cultures and religions can coexist in harmony. Guyana, in this regard, welcomes the sharing of experiences with Canada in protecting its diversity and promoting inclusivity” the President said.

High Commissioner Giroux echoed the President’s sentiment, noting that Guyana forms part of Canada’s diversity as tens of thousands of Guyanese have established roots in Canada and have integrated successfully into Canadian life and have contributed significantly to that country’s rich, multi-cultural fabric. President Granger also saluted Canada’s consistent support for Guyana’s territorial integrity and sovereignty over the years. He said that this support reflects the two countries’ shared values of respect for international law, international treaties, the peaceful settlement of disputes and the promotion of international peace and security.

He also spoke of the mutually beneficial partnerships between the two countries in terms of trade, investment, technical assistance and social development. “Canada remains the principal source of foreign direct investment in Guyana’s gold mining sector. Guyana’s National Assembly, security and justice systems have benefitted from Canada’s assistance and support. Guyana values its long-standing and fruitful friendship with Canada,” he said.

High Commissioner Giroux, whose tour of duty has come to an end, said that the warmth and hospitality, which he and his family have received made his posting in Guyana one of the most successful assignments of his career. Speaking of the long-standing friendship between Canada and Guyana, he said, “As we celebrate Canada’s 150th Anniversary of Confederation, Canadians are looking to the future with hope and optimism. Let us share this hope and optimism with Guyana and work together for a promising future.”

The Confederation of Canada was the process by which four British colonies, Nova Scotia, New Brunswick and Canada merged together to become the Dominion of Canada on July 1, 1867. Guyana and Canada have shared cordial relations since the establishment of formal diplomatic relations on May 26, 1966, the date of Guyana’s Independence.