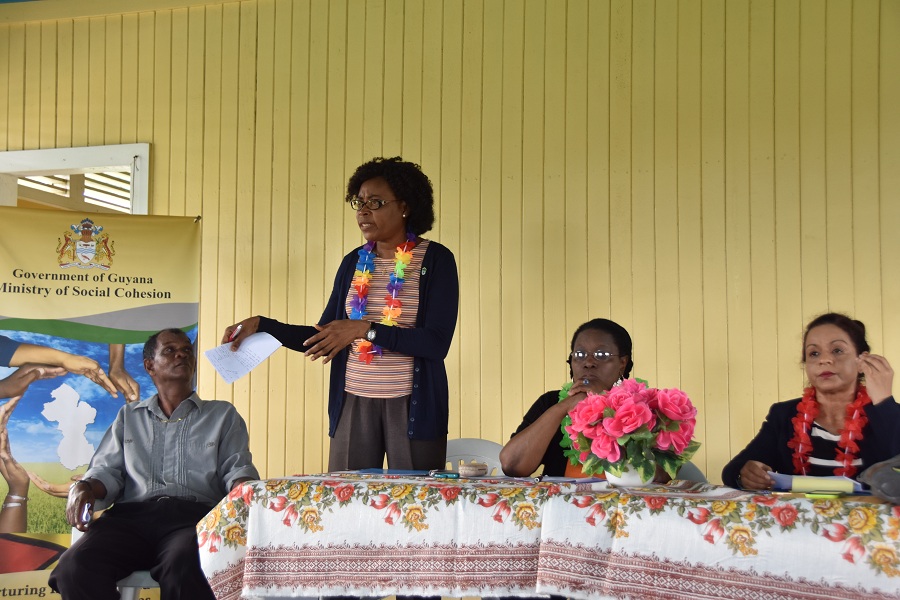 Georgetown, Guyana – (June 29, 2017) Participants at the first Social Cohesion sensitisation meeting for Regional and Neighbourhood Democratic Councillors and community leaders in Leguan, Essequibo Islands-West Demerara (Region Three) asked the Ministry of Social Cohesion to support the hosting of a Harmony Village activity on the island, similar to the one held on Main Street, Georgetown in March and the one planned for New Amsterdam, East Berbice-Corentyne on Wednesday, July 5. Fifty-five community leaders and residents participated in the session, which was held in the Leguan Community Centre.

Representative from the Department of Culture, Youth and Sport in Leguan, Mr. Harvey Gobin said that the island could consider hosting its own Harmony Village that would not only celebrate residents’ cultures but provide an opportunity for trade. “All of us here are representatives from the churches from the masjids and so on… We could… host a Harmony Village. We have farmers, we have fishermen… This could serve as a form of economic activity… It would bring in people from the other regions to view us here. It is an opportunity for the Leguan people to set up booths, to showcase Leguan,” he said.

Similar sentiments were expressed by Mr. Irvin Stanton, who asked the Ministry to assist with helping Leguan to market its products. “On this island, we produce a lot; craft, milk, farm produce. We have it all here. We don’t have a market day here. We have to carry our produce across the river or even as far as Linden. What I’m asking is if the Ministry could… bring everybody together under one roof,” he said. Several of them said that the community’s youth are a key target group and expressed an interest in creating opportunities for them to learn how to respect differences and cooperate with each other for the economic development of the island.

Programme Coordinator at the Ministry of Social Cohesion, Ms. Sharon Patterson delivering her remarks at the first sensitisation session for regional and community leaders in Leguan, Essequibo Islands-West Demerara (Region Three). Also pictured at the head table are, from left to right: Representative from the Department of Culture, Youth and Sport in Leguan, Mr. Harvey Gobin, Deputy Regional Executive Officer Ms. Jennifer Ferriera Dougall, and Technical Officer at the ministry with responsibility for Region Three, Ms. Pamela Nauth.

At the opening of the meeting, Deputy Regional Executive Officer, Ms. Jennifer Ferriera-Dougall urged the participants to use the forum to begin the process of further collaboration on the promotion of harmony in the community and at the national level. Ms. Ferreira-Dougal added that social cohesion prevents and responds to incidence of isolation, racism and conflicts and helps to foster partnerships between stakeholders that will have a significant impact on the long-term outcomes of a society.

“A cohesive community is [one] where there is a common mission and a sense of belonging for the whole community. The diversity of people’s background and circumstances are valued and those from different backgrounds should have similar… opportunities within the community. A cohesive society works towards the well-being of all its members, fights [against] exclusion and marginalisation, creates a sense of belonging and promotes trust and also offers its members the opportunity for upward mobility,” she said.

Meanwhile, Programme Coordinator at the Ministry, Ms. Sharon Patterson commended the group for capitalising on the opportunity to exchange ideas. She noted that that is among the first steps in generating new ideas and developing solutions to matters that concern them. Ms. Patterson also assured them of the Ministry’s support and noted that it has embarked on a number of initiatives, including the implementation of the National Strategic Plan on Social Cohesion 2017-2021 and has executed several projects aimed at boosting the earning potential of vulnerable and other groups.