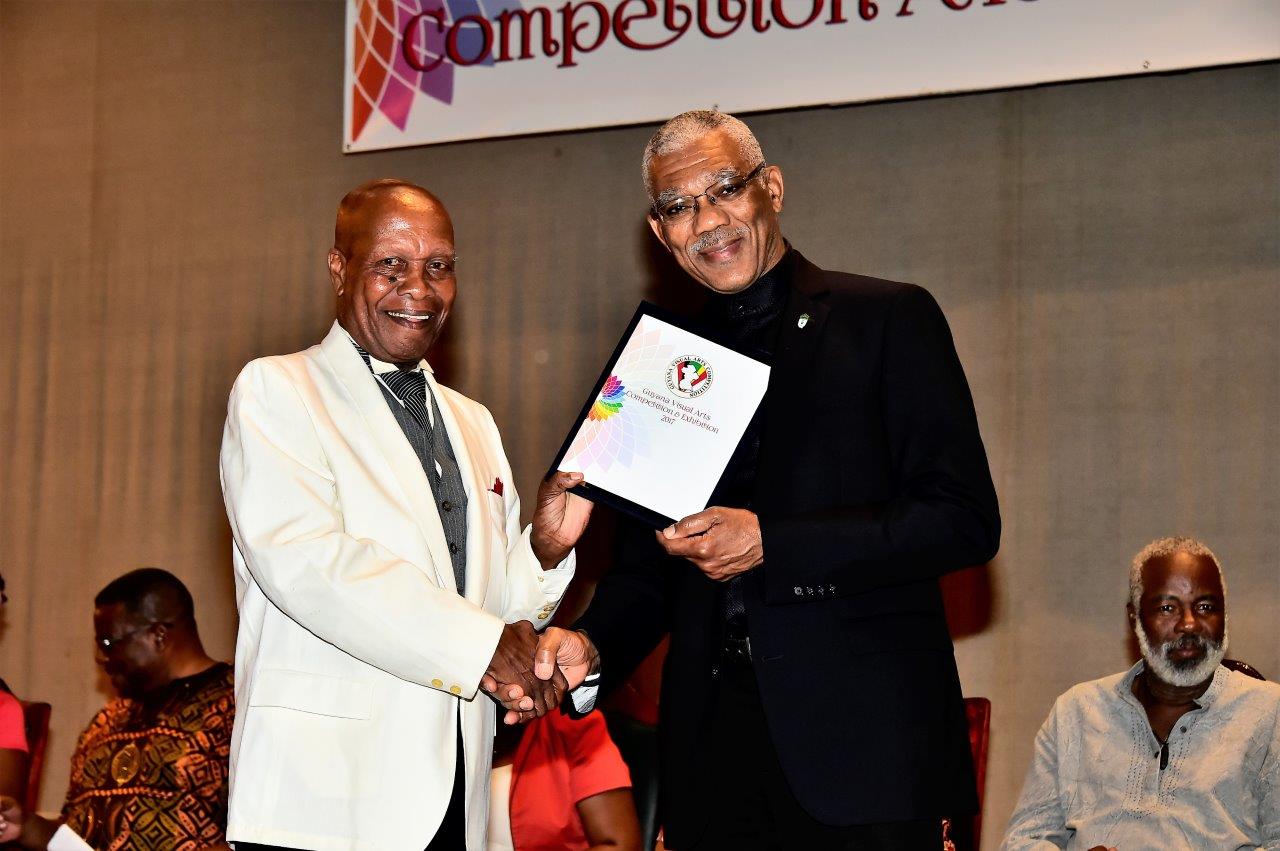 Georgetown, Guyana – (June 29, 2017) President David Granger, tonight, reaffirmed his commitment the development of the arts in Guyana and assured the visual arts community of the Government’s full support. The Head of State, who is patron of the Guyana Visual Art Competition and Exhibition, told those gathered at the National Art Gallery at Castellani House for the 2017 Visual Arts Exhibition that his commitment to promoting Guyana’s art is demonstrated by what he calls ‘art diplomacy’.

“Some of you may not be aware that I actually practice art diplomacy… When I went to Barbados’ 50th anniversary of Independence, I presented a huge painting of the Canje Pheasant and I presented a wooden carving by Winslow Craig. I have been selling Guyana’s art abroad… When I went to the Bahamas earlier this year, I presented a painting of the jaguar; our National Animal. I don’t make any bones about my patriotism and my support for the arts. If a diplomat comes to see me he is going to get a little pottery. So I try to practice art diplomacy by putting Guyanese art into the diplomatic field,” the Head of State said just before declaring the exhibition officially open.

President Granger also hinted at his intention to support art exhibitions across the country, tying this to his policy of developing the capital towns in the 10 Administrative Regions, noting that each has their own unique geographical zones that inspire the creation of the wide variety of visual art pieces in the country. “I do hope that more Guyanese children will get a chance to see exhibitions like this… There is no reason why every region should not have a capital town and every capital town should not have an art gallery,” he said.

Prior to the opening of the exhibition, the President attended the award ceremony for the Guyana Visual Arts Competition which was held at the National Cultural Centre. This competition saw over 200 entries from artists from as far as Port Kaituma in the Barima Waini Region to East Berbice-Corentyne. The competition was judged in six categories including, painting, drawing, photography, sculpture, ceramics and fine craft.

This year the management committee of the Guyana Visual Arts Competition and Exhibition presented a lifetime achievement award to Mr. Jorge Bowenforbes. This art veteran is a poet, painter and author, whose work has been exhibited in galleries in countries such as Mexico, Britain and Australia. Receiving his award, Mr. Bowenforbes said that though he has won a total of 251 awards overseas, being recognised in the land of his birth means lot more to him.

The mission of the Guyana Visual Art Competition and Exhibition is to give recognition and support to the creative work of Guyanese in the Visual Arts, and to provide a source of inspiration to Guyanese artists, thereby stimulating the development of the finest expressions of the visual imagination.