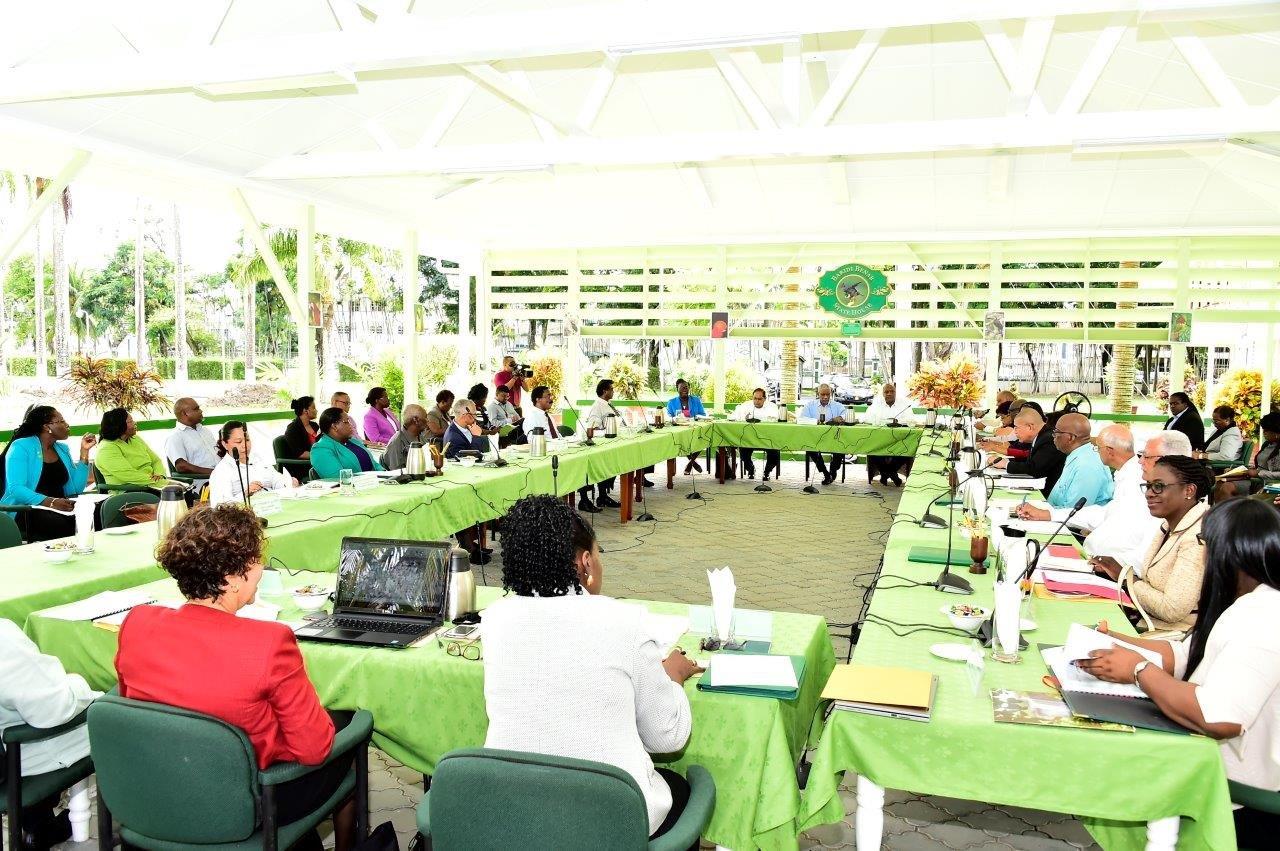 Georgetown, Guyana – (June 29, 2017) Assessments, adjustments and achievements in relation to the public sector’s work programme was the main focus at this month’s Ministerial Conference as the Government commences preparations for the new budget cycle. The Conference, which was convened today at State House, also saw the participation of Permanent Secretaries, Heads of various agencies and high-level technical and financial officers in a bid to assess and review, ministry by ministry, the status of Public Sector Investments Projects (PSIPs).

In a brief comment to the Press and Publicity Unit, Minister of State, Mr. Joseph Harmon explained that given the fact the fiscal year is already at the half-way point, it is necessary to take stock of what currently obtains, particularly as it relates to the $56B, which was allocated for PSIPs, so as to plan efficiently and prudently for 2018.

“The Finance Minister pointed out that in the absence of enhanced spending by the private sector it is the Government’s spending that will drive economic growth… We needed to ensure that the monies were spent so that the economy will be driven in a specific way… The Minister of Finance gave us some projections for the rest of 2017 and an outlook for 2018. He had his entire team of technical officers from the Ministry, so we have a very good sense of where we are now and what we need to do to complete these projects by the end of the year,” Minister Harmon said.

With regard to the 2018 National Budget, the Minister informed that the ground work has already commenced. He noted that since this is the CoalitionGovernment’s third budget, since it came into Office in 2015, they are now in better and more informed position to identify and analyse areas of expenditure and to chart the way forward in terms of expediting public sector projects.

Minister Harmon also took on the Opposition Leader, Mr. Bharrat Jagdeo’s, with regard to his criticisms of the Government’s move to have the budget presented in Parliament in November. According to a Guyana Times report, Mr. Jagdeo said that there are many downsides of having a budget presented early. Minister Harmon described the Opposition Leader’s remark as “disingenuous”, noting that as a former Minister of Finance, himself, Mr. Jagdeo would understand the value of an early budget in so far as planning and execution of Government projects are concerned.

“An early budget allows you an entire year to actually spend monies where as a late budget would not give you a complete year. In the previous administration, the budget came out in February sometimes in March. So after you go through all of the Government processes you really can’t start spending until sometime in April or May. What this meant was that in the first quarter of the year, you are spending one-twelfth of what you would have receive in the previous year,” the Minister explained.

He added that the presentation of the budget in November allows for spending for the fiscal year to commence in January of that year, since budget debates and consideration of estimates are likely to be completed by the end of the preceding year. “I believe that this is a good thing. In fact, in most civilised countries of the world the budget is finished by November… It is the certain level of competence and efficiency that we have brought to the process that is allowing us to have a budget so early. This is really what efficiency is all about and I think he (Mr. Jagdeo) is running from that,” The Minister of State said.

Remarks by His Excellency David Granger at the President’s Awards 2017 hosted by the Tourism and Hospitality Association of Guyana (THAG) held at the Marriott Hotel on June 3, 2017