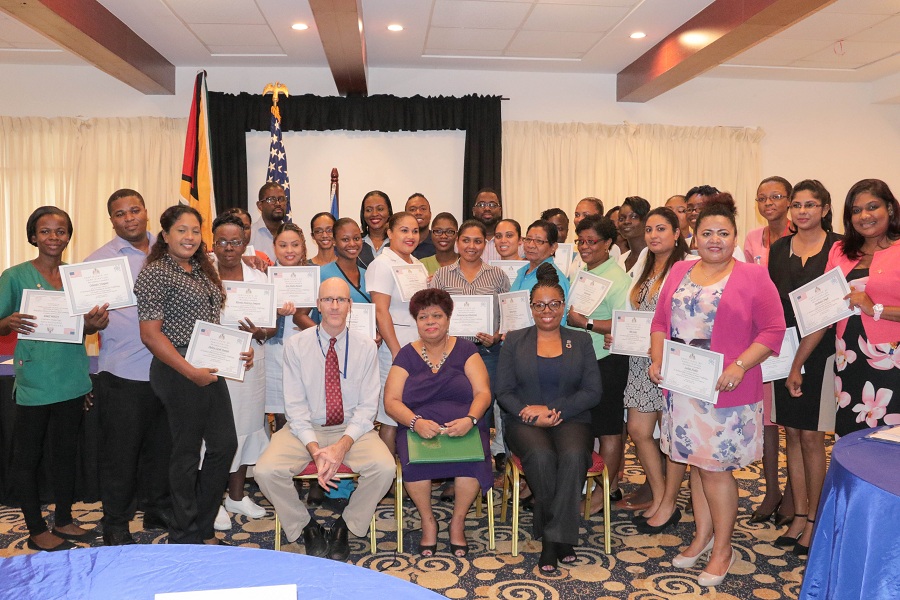 Georgetown, Guyana – (June 27, 2017) After being placed on the ‘Tier 2 Watch List’ for three consecutive years from 2013-2015, Guyana has been reclassified to a ‘Tier 1’ country in the United States’ Department of State’s 2017 Trafficking in Persons (TIP) Report, which was released today. Minister of Social Protection, Ms. Amna Ally said that this classification is testament to the hard work that the Government has been doing to delink Guyana from the notoriety associated with being a known source and destination country for which men, women and children are subjected to sex trafficking and forced labour.

The work of the Government, particularly the Ministry of Social Protection has resulted in Guyana being placed in the bracket of countries that fully meet the minimum standards for the elimination of trafficking, making it only the second Caribbean country to reach this milestone. Guyana had been moved from the watch list in 2016 but remained on ‘Tier 2’ because, according to the report, the country had not fully met “the minimum standards for the elimination of trafficking. However, it [was] making significant efforts to do so.”

“Under the 2015 Trafficking in Person Report on Guyana, mention was made on the limited Government presence in the interior regions, which left little scope for the full extent to which Trafficking in Persons crimes occur within these regions. There seemed to be an inability of the previous administration to adequately combat trafficking in person in these areas,” Minister Ally said. When the Coalition Government took office, immediate actions were taken, which resulted in the reformation of the Anti-Trafficking Inter-Ministerial Taskforce. That body includes several Government agencies and non-governmental bodies, including the lead anti-trafficking group, the Guyana Women Miners Organisation.

Chief of Mission for the International Organization for Migration (IOM), Robert Natiello, Minister Amna Ally, Keisha Livermore, Head of TIP Office IOM (sitting) at the closing ceremony for the training of Medical Practitioners on TIP

Meanwhile, Minister of Public Health, Ms. Volda Lawrence, who held the portfolio of Minister of Social Protection up to January 2017, said that the latest report vindicates the Government and is proof of the political will to fight this scourge. “We have made great strides in addressing TIP since we came into Government and, as I said last year, it is the political will that is needed to address this issue. This is not a Guyana issue. It is a worldwide issue and, hence, it is the political will that will help to bring this particular form of what they call ‘modern-day slavery’ to an end,” Minister Lawrence said.

She explained that the first thing the Government did was recognise and acknowledge that there is human trafficking in Guyana then moved to strengthen the department that deals with trafficking in the Ministry of Social Protection. “Where there were just two persons, we beefed it up we ensured that all the requisite personnel were in place and also we sought to build partnerships. We worked with the Guyana Police Force. There was some training done in terms of investigative skills and also a police officer was assigned to the department.”

The report highlights key country achievements, which were made during the reporting year, including the approving the 2017-2018 national action plan for combating trafficking in persons; increasing the number of investigations, prosecutions, and convictions; and identifying and assisting more victims for the second year in a row.

Minister Ally said that the Government has “increased collaboration with anti-trafficking non-governmental organisations by instituting procedures to refer victims to the shelter. These efforts have been sustained with significant strides being made to employ additional personnel. She also informed that the Ministry of Social Protection completed several awareness and training sessions in high risk areas. Training sessions were also conducted with front line officers and medical practitioners to build capacity in identifying possible instances of TIP.”

This point was supported by Minister Lawrence, who said that all of the recommendations in the report are on the Government’s agenda. “When we came in we built this section [TIP department in the Ministry of Social Protection], we got the task force going, we came up with an action plan… It’s a work in progress. We started out on ‘Tier 2 Watch List’ then we went to ‘Tier 2’, today we are on Tier 1 and it tells you that the Government is doing what it is mandated to do and that is to protect its citizens. We have not been able to accomplish everything, but we believe that our focus and the plan which we have will certainly get us there,” she said.

She added that the fact that the Ministers of Public Security, Social Protection and Indigenous People’s Affairs are all sitting on the TIP task force speaks to the seriousness and commitment, which the Government attaches to the fight against human trafficking.

While this improved ranking is significant and should be celebrated, the Government recognises that much more needs to be done. Minister Ally said that some of the areas, which continue to engage their attention, include awareness programmes targeting children and vulnerable groups, impromptu inspections in the capital and interior locations, anti-trafficking training for members of the public service, improvement in staffing capacity at Ministry of Social Protection to bolster the reach of the TIP unit and counselling and support for victims.

Remarks by His Excellency David Granger at the Opening Ceremony of the Inaugural Municipal Conference held at the Marriott Hotel on May 19, 2017