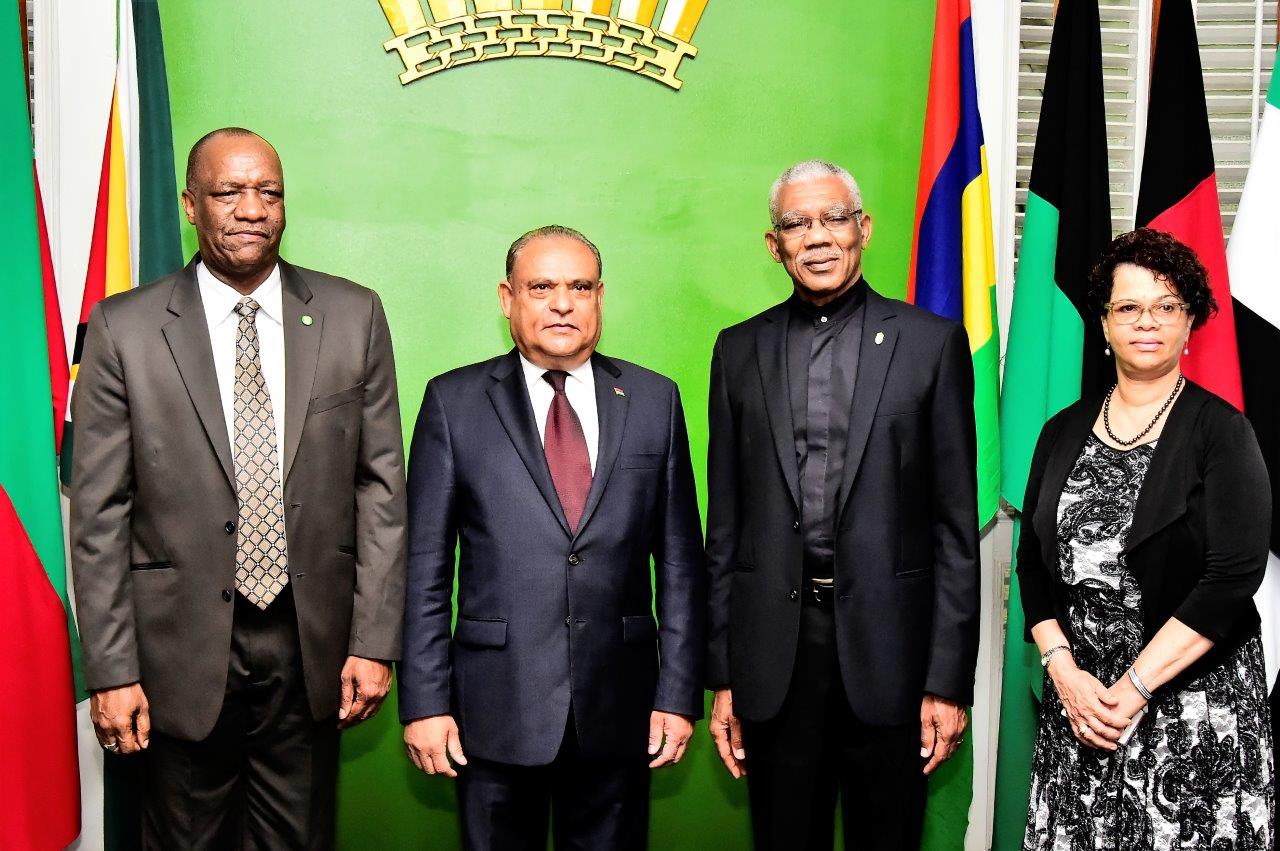 Georgetown, Guyana – (June 21, 2017) President David Granger, today, accredited His Excellency Do Ba Khoa as the new Ambassador of the Socialist Republic of Vietnam to Guyana and His Excellency Sooroojdev Phokeer as the new High Commissioner of the Republic of Mauritius to Guyana. The former is resident in Brasilia with the latter resident in Washington, United States.

The Head of State spoke of the cordial relations that Guyana shares with both countries, insofar as it relates to their shared values of mutual respect for each other’s territorial integrity and sovereignty, peace, security and international law and, moreso, their commitment to the protection of the environment. He noted that like Guyana, Vietnam identified coastal-zone and forest protection, as well as biodiversity conservation as priorities for sustainable development in their environmental strategy. 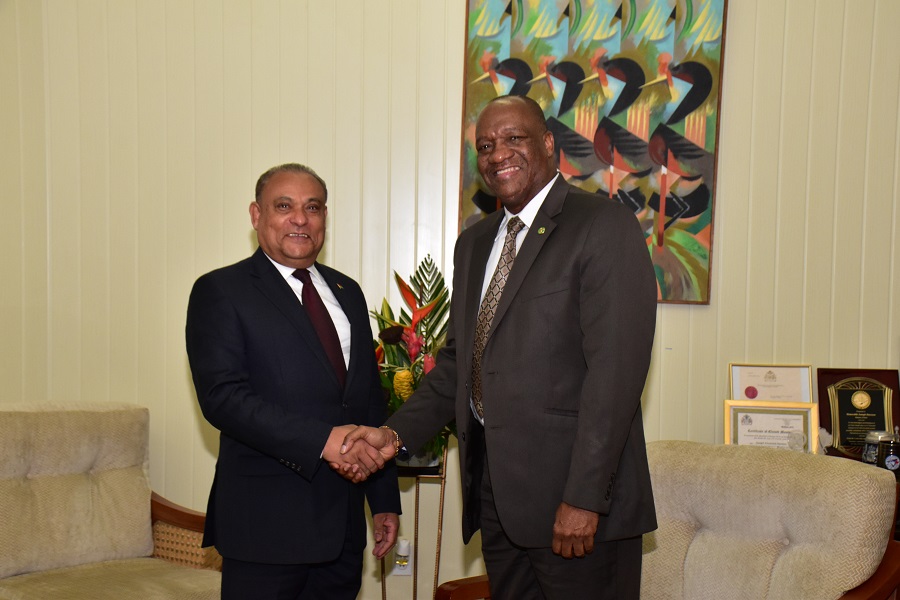 Minister of State, Mr. Joseph Harmon and High Commissioner Sooroojdev Phokeer at the Ministry of the Presidency

“Guyana is moving towards becoming a ‘green’ state – one that will place emphasis on the protection of our environment, the preservation of our biodiversity, the provision of eco-educational and eco-tourism services and the promotion of renewable energy and practical measures to ensure climate adaptation… Guyana, in this regard, seeks to learn more and to benefit from Vietnam’s considerable expertise in aligning ‘green’ growth with sustainable development. Vietnam is well known for its uniquely high level of biodiversity and numerous conservation areas and national parks,” President Granger said after receiving the Letters of Credence from the Vietnamese Ambassador.

Prior to presenting their Letters of Credence to the President, the two diplomats met with Minister of State, Mr. Joseph Harmon, who is currently performing the duties of the Foreign Affairs Minister. During the meeting with Ambassador Do, he pointed out that Vietnam’s sustainable economic development model is one that is admired by the Government of Guyana and which can be used for the further advancement of this country’s Green State Development Strategy (GSDS). “There are several important steps that you have taken economically; your ten-year development strategy and I think they are all matters, which we look at very carefully and we hope to learn from you,” the Minister said. 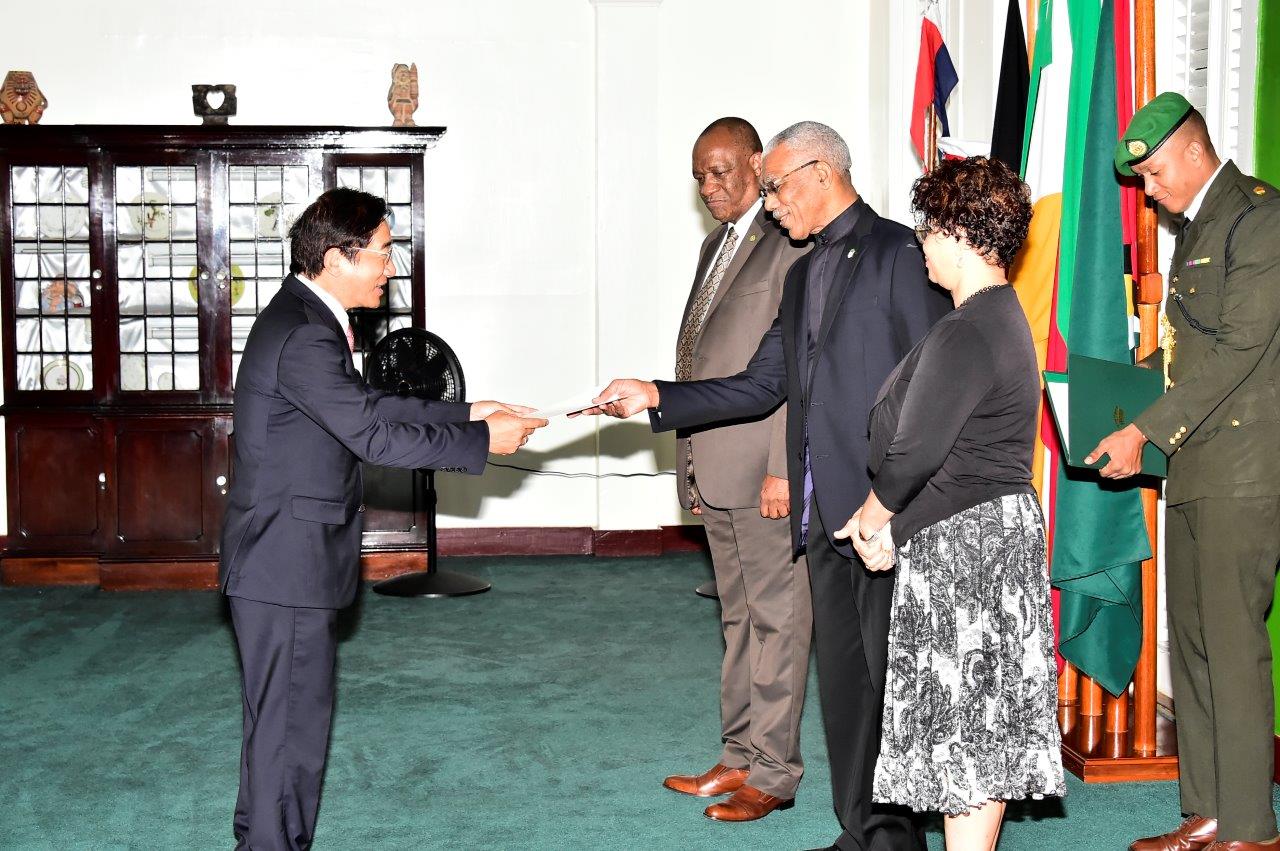 Ambassador of the Socialist Republic of Vietnam to Guyana, Do Ba Khoa presenting his Letters of Credence to President David Granger in the presence of Minister of State and Acting Foreign Affairs Minister, Mr. Joseph Harmon and Director General in the Ministry of Foreign Affairs, Ms. Audrey Waddell at State House 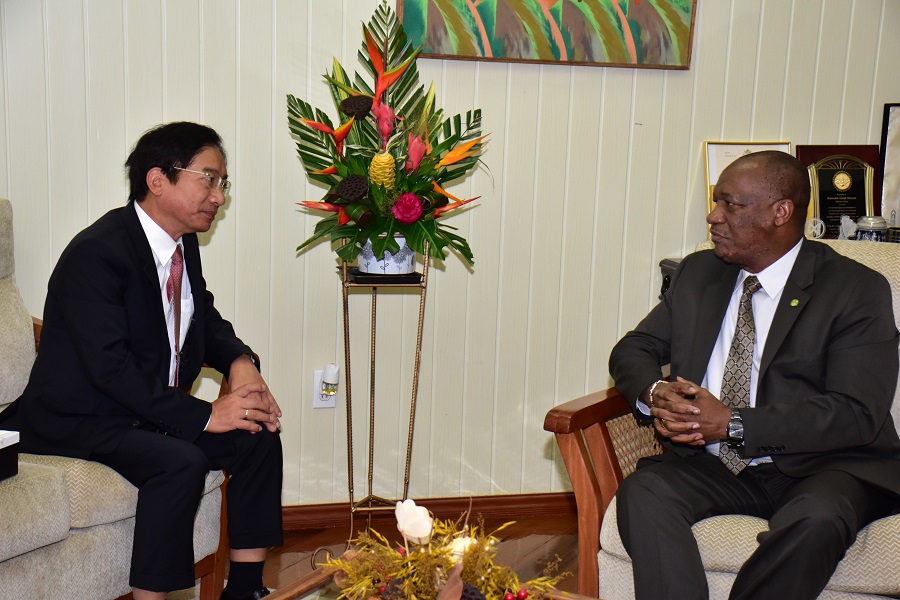 Minister of State, Mr. Joseph Harmon and Ambassador Do Ba Khoa during their meeting at the Ministry of the Presidency

He also informed that Guyana looks forward to consolidating its cooperation with Mauritius, given the shared support for the Paris Agreement on Climate Change and the 2030 Agenda on Sustainable Development.

The Head of State also assured both diplomats of his Administration’s full support during their tour of duty. Guyana established diplomatic relations with Vietnam in April 19, 1975, forty-two years ago and with Mauritius in December 1992.

Meanwhile, Ambassador Do, in his remarks, extended an invitation to President Granger, on behalf of Vietnamese President Trần Đại Quang, for an official visit to that country. “During my mission, I will try my best to promote the bilateral cooperation between our two countries,” he said. Ambassador Do also spoke highly of Guyana’s efforts to maintain political and economic stability and proactive foreign policies.

These sentiments were shared by High Commission Phokeer, who pointed out that Guyana and Mauritius are two young States with similar historical developments and that it is these shared values that have paved the way for meaningful cooperation since diplomatic relations were first established in 1992.

“Our two countries can explore the possibilities of cooperation and exchanges in the fields of sports, education, tourism, textiles and culture. Academia can also conduct studies in mutual areas of interest,” the High Commissioner said.

$13M disbursed to bolster science and technology delivery in schools